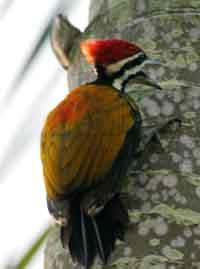 Nearly two months after the eggs were hatched, the doves are permanently gone from tha vicinity of their nest. No more do I hear their pleasant cooing each morning and evening. No more can I see them huddling together on a branch, preparing to roost for the night. Every trace of the trial nest is now gone. Every single piece of dried grass stem has been removed. In a way it is good that they are building a new nest somewhere else. The area around the tree where the nest was is now busier than even. Workers are moving around under the tree, as construction activities of the house behind is moving forward towards the road. The birds managed to avoid detection for more than two and a half months. I am not sure whether they can avoid detection if they are to nest in the same tree again.

I am now waiting for the next pair of birds to build their nest around my place.

Amateur birders have always played an important role in collecting information that ornithologists find useful to write their papers and monograph. This has been clearly seen in the recent book by Dr David Wells, The Birds of the Thai-Malay Peninsula Vol. I. In the preamble to his book, he paid tribute to professionals whose theses and scientific papers provided useful materials. At the same time he recognized the contributions of amateurs, especially members of the Nature Societies in Malaysia and Singapore. The Malaysian society publishes Enggang while the Singapore counterpart is Singapore Avifauna (SINAV).
The Nature Society (Singapore)’s Bird Group (BG) recently made a detailed check on the number of citations from SINAV in Wells’ book. It yielded 168 citations for a total of 118 species under various aspects of birdlife such as identification & distribution; status & population; habitat & ecology; breeding; geographical variation; movement; foraging & food; moult; social interaction; and social organisation.
This is indeed quite a contribution by SINAV to the ornithology of Singapore. It certainly changes my earlier erroneous impressions of the publication. And this is only the first volume, covering the non-passerine group. The second volume covering the passerine group is coming out soon. I am waiting eagerly to make another count to prove the above point.
Well done, Singapore Avifauna!

NOTE: Unfortunately, when I made the above post, I was not aware of the unwillingness of the Bird Group leadership to make the publication available to Dr David Wells, who was then working on Vol I of “The birds of the Thai-Malay Peninsular” – LINK.

The three birds had been returning to the area of their nesting ever since the two nestlings fledged. At around 6.30 to 7.00 pm every evening, an adult bird would perch high up on a scaffolding pole and vocalise, whereby the two young adults would fly in to join it. All three birds would then fly to their favourite Golden Penda tree and perch on a branch, huddled close together throughout the night. Around 7 am the next morning they would fly off.

A few mornings ago, when I went to check on the birds at their perch, I had a look at the new nest. Imaging my surprise when all the nesting materials were gone. The birds must have used this site to build a trial nest. The materials must have been removed to a new nesting site.

But where? And are the birds gone forever?

This morning, I woke up late and missed seeing the three birds stirring from their roost. However, I was pleasantly surprised to hear cooing. The two young adult birds were foraging on the ground while the adult was sitting comfortably between the fork of the mempat tree. Suddenly it flew off to the old nest site in the Golden Penda tree. It was cooing repeatedly, making low gurring sounds in between.

When I returned home just after midday, I heard more cooing. The three birds were back. The two young adults were again foraging on the ground while the adult was in the old nest site. Soon, the two other birds joined it. The adult was sitting in the old nest site adjusting the sparse nesting materials of dried pieces of twigs and coiled climbing fern stems. One bird nearby was seen contributing a piece of dried plant material.

There was a cooing from nearby, probably made by the mate. Soon all three birds flew off. I took a closer look at the tree and yes, there were definite signs of a new nest. 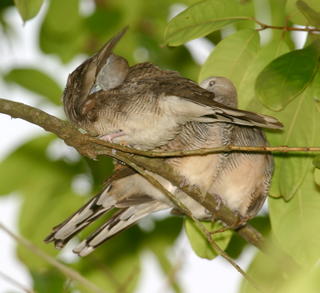 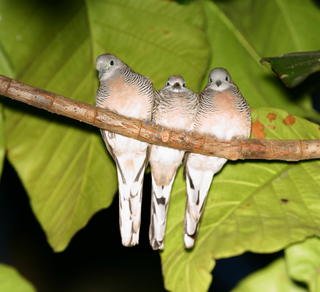