Skip to Main Content
[ https://www.inaturalist.org/observations/96054473 ] shows a king cobra not doing its warning display.
Soh Kam Yung shared this photograph to educate readers about this snake’s appearance when it is not threatened and not with the warning display.
Read this post, https://besgroup.org/2022/09/01/king-cobra-ophiophagus-hannah/ to find out more about this snake and the shots showing it with the characteristic hood flattened.
Note to readers: If you like this post please tap on the Like button at the left bottom of page.

The King Cobra belongs to the genus Ophiophagus while the true cobras belong to the Naga genus. There are several other snakes with the common names of cobra that do not belong to the Naga genus, such as Tree cobras (Pseudohaje), Ring neck spitting cobras (Hemachatus), Shield nose cobras (Aspidelaps), Black desert cobras (Walterinnesia) and False water cobra (Hydrodynastes).

King cobras usually range from 10 to 13 feet but can reach 19 feet in length, making them the longest of all venomous snakes.

These snakes are found from north-east India, Nepal, Bhutan, Bangladesh, Myanmar, Thailand, southern China, Liao, Cambodia, Vietnam, Malaysia, Singapore, Indonesia and Philippines. They are found in forest areas, grasslands and mangrove forests. The skin color varies across the habitats, from black with white stripes to unbroken brownish grey. The muzzle is rounded, and the tongue black.  It has two short, fixed fangs in the front of the mouth, which channel venom into the prey. The large eyes have golden irises and round pupils.

When confronted, the snake lifts up to a third of its body (front part) off the ground and then move forward to attack in this stance. This is then followed by the flare of its iconic hood and emitting a hiss that sounds almost like a growling dog.

A King Cobra hunts by detecting the prey’s chemical sense particles in the air with the stereo-capable forked tongue. These sense particles are transferred to a sensory receptor (Jacobson’s organ) located in the roof of its mouth. After analysis, the cobra can gauge the location of its prey. In addition, the cobra is also capable of receiving stereo earth-borne vibration signals, via the two halves of its unconnected lower jaws.

The king cobra venom is mainly neurotoxic. It is not the most toxic of snake venom but it is very deadly because of the large amount that can be injected. The amount is enough to kill 20 men or a large elephant. . King cobra venom affects the respiratory centers in the brain, causing respiratory arrest and cardiac failure.

After the prey is paralysed, it is swallowed whole, even if it is larger than the cobra’s head. This is because the jaw bones are loosely connected. This ability is known as cranial kinesis.

It hunts mainly in the day, occasionally at night.

Two male cobras wrestle for a nearby queen.

They are the only snakes in the world that build nests for their eggs. The female scrapes up leaves and other debris to form a mound where she lays her eggs. She guards her eggs ferociously until just before the hatchlings emerge. The male is usually nearby. They are known to pair for life.

One of the natural enemies of the King Cobra is the mongoose.

Read this post https://besgroup.org/2022/09/02/king-cobra-with-hood-unseen/  that shows a King Cobra not in warning display.

Shahrul Kamal was tipped off by another photographer that a pair of Black-naped orioles (Oriolus chinensis) were nesting successfully at Bishan Street 22. He was amply rewarded with the beautiful images below. As the nest was quite high up, Shahrul used his ingenuity to take the footages from a small window on level 6, next to the lift lobby. A 900 mm camera lens was used.

Orioles form permanent bond-pairs and mate for life. The open cup-shaped nest is assembled by the female bird with occasional help from the male which collects nest-building materials like leaves, grass and bark. 2-4 eggs are laid and usually 2 chicks survive to fledgling stage. Both parents are actively involved in raising the chicks.  Food like caterpillars and insects are fed to young chicks, fruits, seeds, and young of other birds/vertebrates are added to the diet as the chicks grow. Orioles usually forage on tree canopies in the vicinity of the nest and seldom descend to the ground to forage.

Black-naped oriole, Oriolus chinensis , is a frequent visitor (or permanent inhabitant) of the raintrees in the Methodist College Kuala Lumpur compound. The raintrees also host many oriental magpie robins and the occasional elusive kingfisher (yet unidentified), and also a spot for Asian koels to converge occasionally. The pictures below were taken by phone cameras.

Watch this video shorts to hear the sounds that this particular oriole was listening to.

Orioles are known to imitate the calls of other birds.

A female Brown-throated Sunbird (Anthreptes malacensis) spotted at Pasir Ris Park on 9 July 2022. Soh Kam Yung saw it stealing nectar (primary nectar robbing) from Hibiscus flowers by piercing the flower base. Nectar robbing does not aid in flower pollination. Secondary nectar robbing occurs when nectar is stolen from the base of flower that had been pierced by another nectar seeker earlier.

Read these posts which also document other birds nectar robbing: 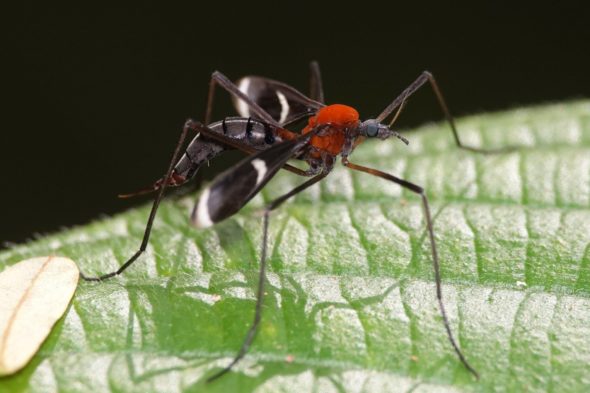 After 2 years of failures, misses, other challenges and constraints, he finally witnessed and photographed our beloved Singaporean born raptor, the wonderful grey-headed fish eagle ( Haliaeetus ichthyaetus) in full action, after just 20 minutes of waiting.
He is happy to share this 11-set sequence with nature lovers. The pictures are self-explanatory.
This eagle is a rare resident breeder and explains Shahrul’s exhilaration.
Potong Pasir Park Connector
9 am

All images © Shahrul Kamal.
Additional texts by Teo Lee Wei.
Note to readers: If you like this post please tap on the Like button at the left bottom of page.

Derek Yeo/VC Wildlife Moments specially put together this short video overnight for his birder photographer friend and talented painter Chow Ngian, who is holding his solo art exhibition at the Visual Arts Center. The exhibition is still ongoing until the 29th of August,2022.

Remember to pop in if you are in the vicinity of Dhoby Ghaut MRT station, admire his masterpieces and say hello to the artist himself! 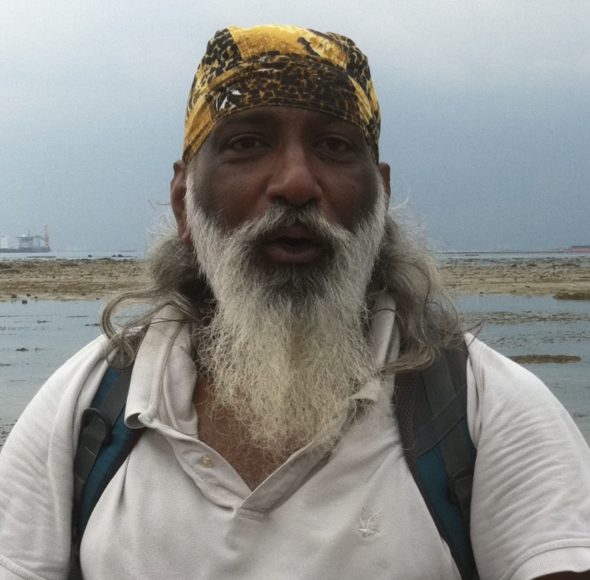 The Straits Times of 8th August 2022 had a large spread that reported a series of animals found in Singapore named after Singaporeans. The highlight of the piece was a newly discovered frog, Micryletta subaraji or Subaraj’s Paddy Frog. Not larger than a marble and found only in Singapore, this frog was named after the late Subaraj Rajathurai, to honour him as a conservationist and a self-taught naturalist. He was an avid birder but his interest was not confined to birds alone. When out in the field looking at birds, he paid attention to other life forms like butterflies, dragonflies, termites, lizards, skinks, toads, frogs, snakes, rats, flying foxes, etc. His knowledge was such that he acted as a resource person on these faunal groups. 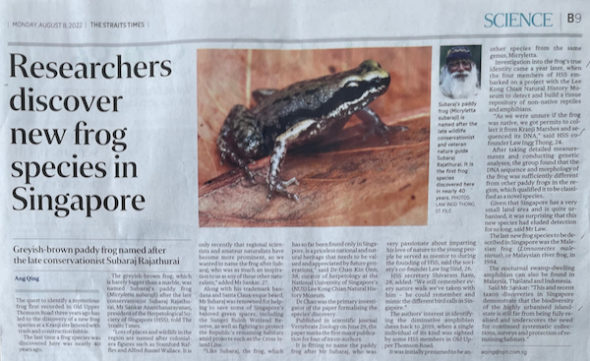 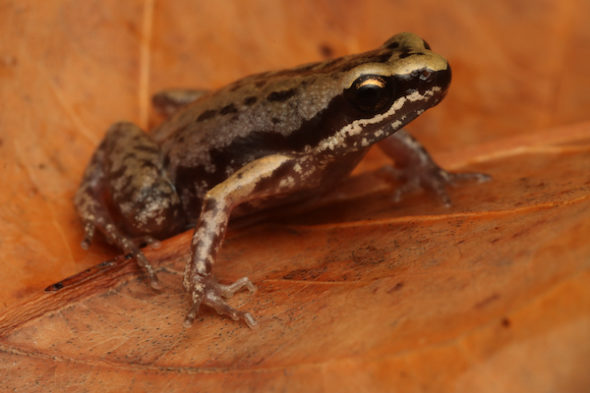 Subaraj was also a conservationist at heart. He played a major role in opposing the government’s proposal to clear a patch of mature secondary forest at Lower Peirce Reservoir for a golf course.

The discovery of this small paddy frog, not larger than a marble, was first noticed some three years ago along Old Upper Thomson Road by members of the Herpetological Society of Singapore (HSS) headed by Sankar Ananthanarayanan. Another location was later traced to the Kranji Marshes. A serious study was only initiated in 2021when members of the HSS roped in Dr Chan Kin Onn, Curator of Herpetology at the Lee Kong Chian Natural History Museum. Genetic materials became available as voucher specimens were collected. This in turn paved the way for detailed morphological and molecular studies that led to the confirmation of a new species of the Paddy Frog from Singapore. 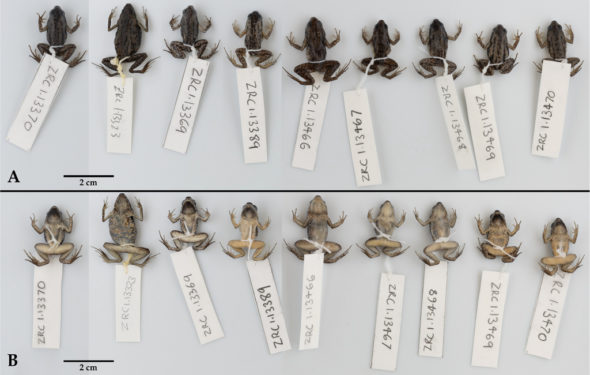 Type specimens upon which description and name of a new species are based. Image courtesy of Ananthanarayanan Sankar et al, 2022.

In traditional Chinese medicine, Paddy Frogs are taken to strengthen the spleen, for malnutrition, diarrhoea and scrofula. It is also pounded into a powder and applied externally for sores, boils and ulcers on the tongue and mouth.

Acknowledgement: I wish to thank Sankar Ananthanarayanan for useful discussion, image of Subaraj’s Paddy Frog and that of the type specimens.