“As a teenager, I recalled the hordes of butterflies that used to flock to the wild Lantana bushes that overran my uncle’s estate. My cousin and I slashed away with machetes in a losing battle to keep the prickly plants at bay.

“When I started my own garden, I tried to cultivate Lantanas to attract butterflies. Unfortunately, the fancy varieties of Lantanas available from nurseries were anything but hardy. And in any case, fogging had exterminated practically all the butterflies in my neighbourhood.

“One day, I did find a wild Lantana. Bringing it home for careful cultivation, I soon had a Lantana hedge.

“Unlike cultivated varieties, wild Lantanas are not sterile. The flowers develop into berries, which attract birds. Watching them was some compensation, even though I was still short of butterflies.

“But recently, I noticed an off-colour addition. This bird was darker, and had very noticeable blotching on the dorsal surface. Of the four varieties of Green Pigeons native to Singapore, the one which sometimes displays dark blotching is the uncommon Cinnamon-Headed Green Pigeon (Treron fulvicollis), though usually not to such a marked extent as the birds shown in the above and below.

Would anyone like to hazard a guess at identifying this off-colour visitor? 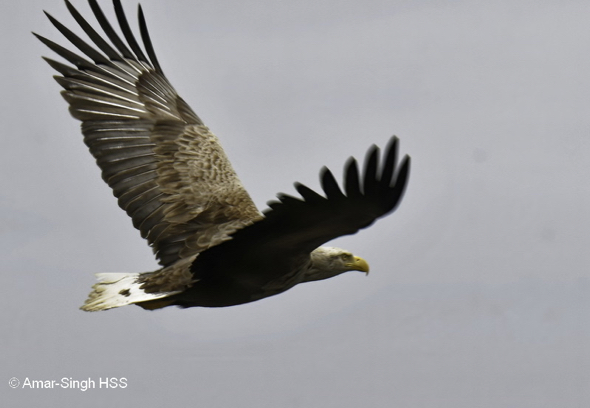 “White-tailed Sea-eagle (Haliaeetus albicilla) was the commonest raptor we saw while at Hokkaido. 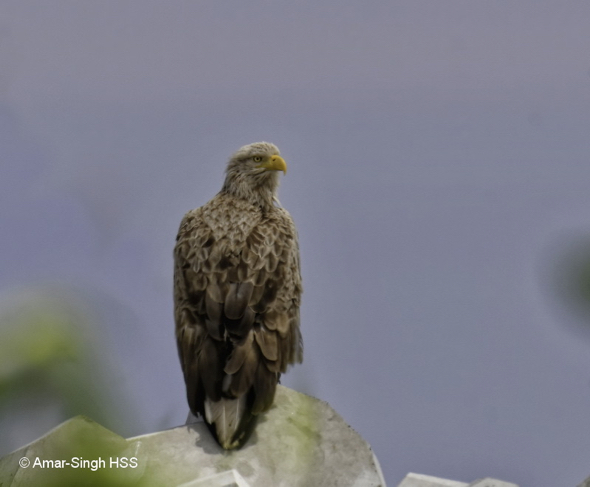 “Quite a number by the coast, both adults and younger birds. 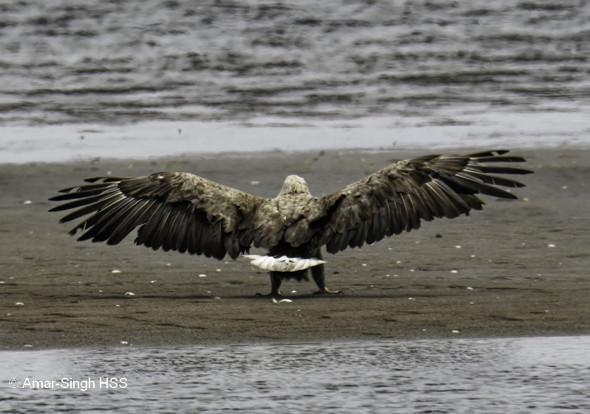 “These 4 posts are of adults.” 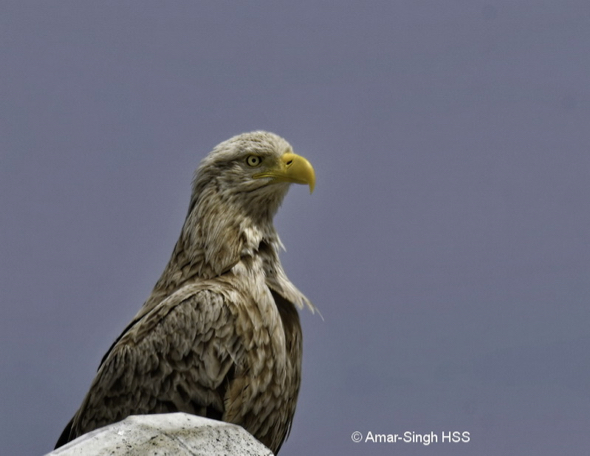 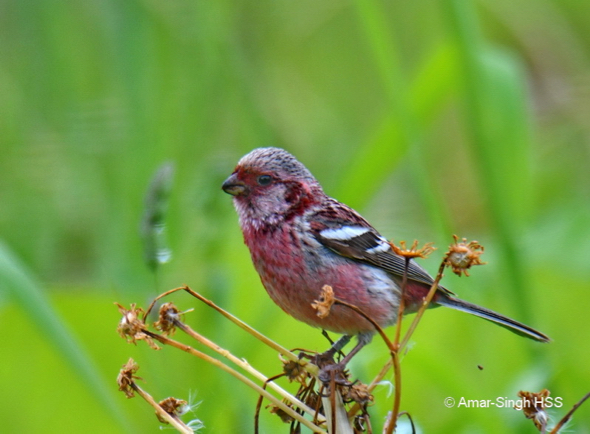 “I have a number of species left un-posted from the time I was in Japan. “Long-tailed Rosefinchs (Carpodacus sibiricus sanguinolentus) are delightful to watch and love feeding on the seeds of the Dandelion (Taraxacum). 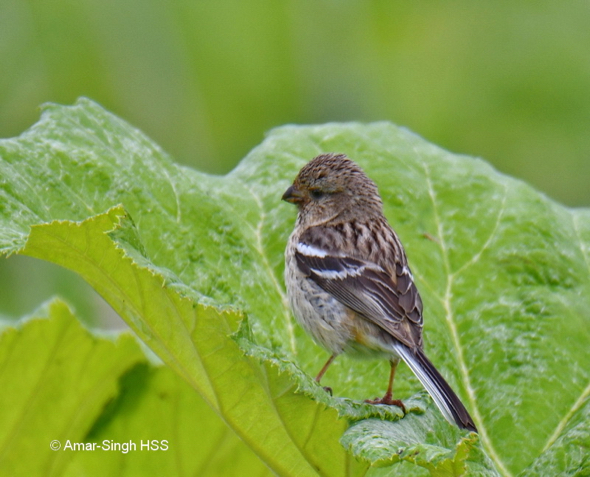 “According to Clement (1993) C.s. sanguinolentus is slightly shorter-tailed and darker (both sexes) than the nominate subspecies. 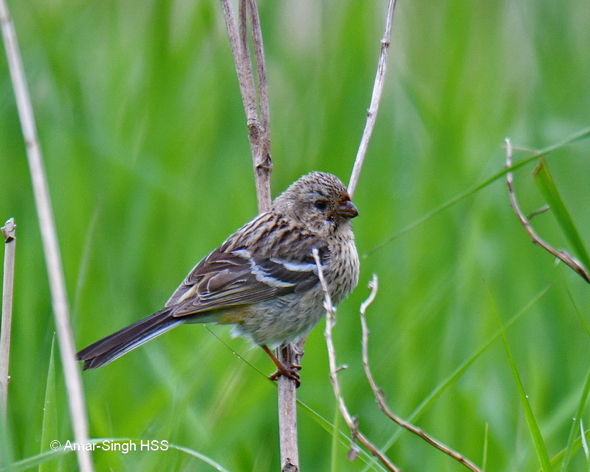 Jkai Chan’s images of a Malayan Water Monitor (Varanus salvator) having a meal of a rotting mammal was documented at Pandan River. His images, posted in Facebook BICA (Bird, Insects n Creatures of Asia), drew much discussion among members.

Members debated whether the carcass could be that of a dog, otter, monitor lizard, pangolin or monkey.

Twelve agreed that the carcass could be that of a monkey. “Very likely a monkey” wrote Tuck Meng Choong, “look at that long tail… a macaque, maybe.” Benedict Yeap and Tony Chung similarly thought it could be a monkey. Molossian Petfeed went a step further, suggesting it looked like a leaf monkey. Based on the long tail, Glenda Heng concluded that it was a Long-tailed Macaque (Macaca fascicularis).

Michael Patrick Marklevitz believed it to be a primate because “Tail looks slender for otter and limbs too long in proportion to body… Proportions of the hand more primate like and note what appears to be a flat nail on the thumb versus a claw on an otter. No webbing.”

Jkai’s images were sent to Dr Leong Tzi Ming, who is one of the contributors to the book on Wild animals of Singapore (Baker & Lim, 2008). Tzi Meng’s reply is given below:

“I have so much respect for these monitor lizards, who have one of the dirtiest jobs in the ecosystem.

“It’s truly amazing how they can bear with the stench, and swallow the foul flesh of decaying animals.

“They must have a remarkable digestive and immune system in order to subsist on this type of diet.

“I have been trying to make sense of the breeding adults we saw while in Hokkaido. Clement (2015) provides extensive descriptions of ‘Common’ Stonechats and the subspecies, including Stejneger’s Stonechat. Opaev & colleagues (2018) say ‘S. stejnegeri is a cryptic species as it cannot be distinguished by morphometrics and by worn spring plumage from S. maurus, but differs noticeably by male song.’ 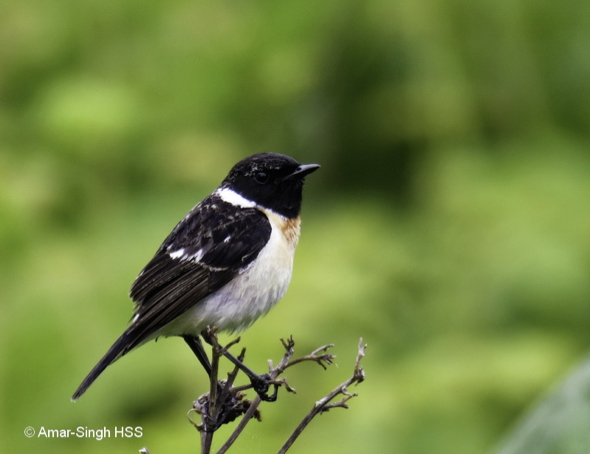 “The adult breeding males are unmistakable with a very dark head and neck (a blotchy supercilium), dark upperparts and varying degrees of orange on the breast (especially bright on the upper breast). Two examples are shown above and below. 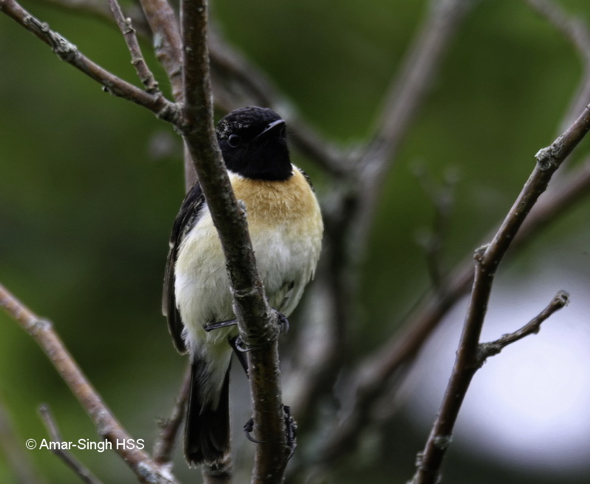 “The adult breeding females are more variable. They have paler upper parts (more brown cf males), a clear supercilium, some orange on the upper breast (not as strong as males) and the expectation is that the throat is lighter. Most of the birds we see when on migration are like this (paler) but we saw some darker females in Hokkaido. 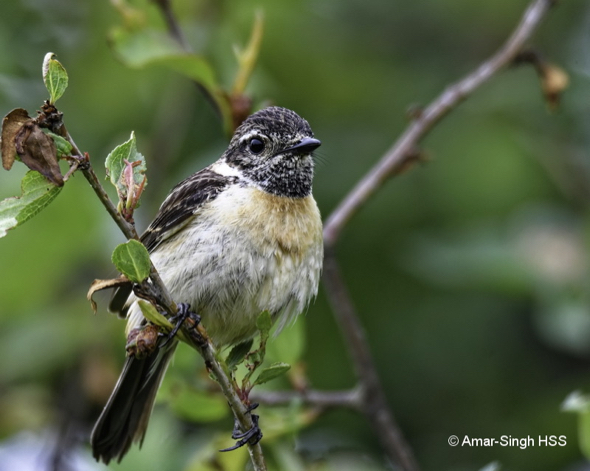 Images above and below are of two adult breeding females (assumed from nest feeding behaviour and presence of a feeding male companion). The bird above was the companion of the bird above this image (we saw this pair at least 3 different times at the entrance to a forest and they were feeding young). 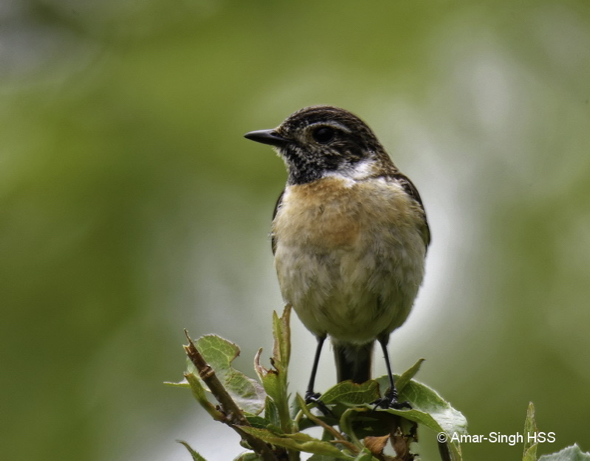 “Some would say that these are breeding first/second year males but there was already a mature adult male in attendance. Clement (2015) does not mention any evidence of male nest helpers. Handbook of the Birds of the World (2019) states ‘Male very occasionally pairs with two females‘.

“I would appreciate opinions.”

“I have left it as Stejneger’s Stonechat, the common Stonechat found breeding in Hokkaido.

“We saw a large number, mostly breeding, often with prey while we were there. The vast majority of prey brought to young were caterpillars or worms. But also dipterans and once a possible spider-like insect.

“Whenever we explore the back mangroves in Singapore or around Southeast Asia, one is almost certain to come across mud lobster mounds of various sizes, at multiple stages of development (above, below).

“However, encounters with the actual mud lobster (Thalassina sp.) itself are often few and far between. One fine morning, I chanced upon this elusive and enigmatic crustacean (below) whilst strolling along a boardwalk. It was engrossed with excavating a burrow, as it repeatedly descended into the murky depths and returned to the surface, shoveling mud and sand.

“Video clips of this rarely observed creature may be previewed here:

“Mud lobsters play an immensely important role in the mangrove ecosystem. As a result of their tireless burrowing and tunnelling activity, the oxygen supply to the roots of mangrove plants is substantially increased. Nutrients from the depths are also brought up to the surface. A wide diversity of animals, from insects and spiders, to reptiles and even other crustaceans, are thus able to find a safe haven inside these cosy cavities.” 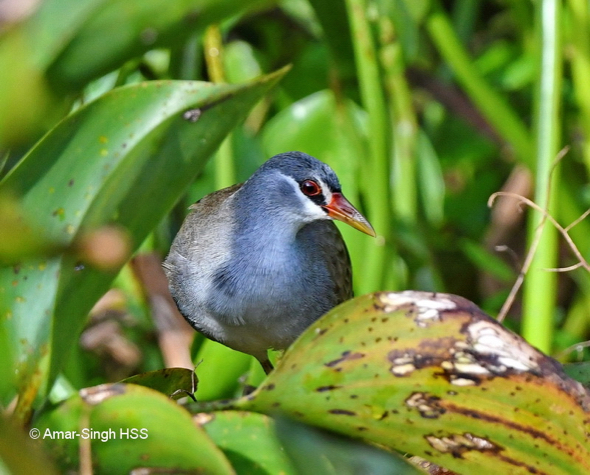 “I met a pair of very accommodating White-browed Crakes (Porzana cinerea) today and was able to spend a long time watching and recording different calls. 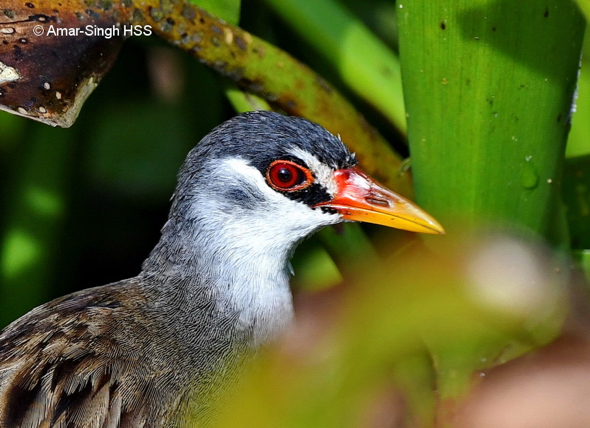 “Some observations about plumage; a close-up of the face of one of the birds as seen above. Handbook of the Birds of the World (Vol. 2019) suggests that ‘in fresh plumage forehead and crown grey, becoming black with wear’. Both the birds I saw (above and below of one individual and top of the other) had darker scalps. 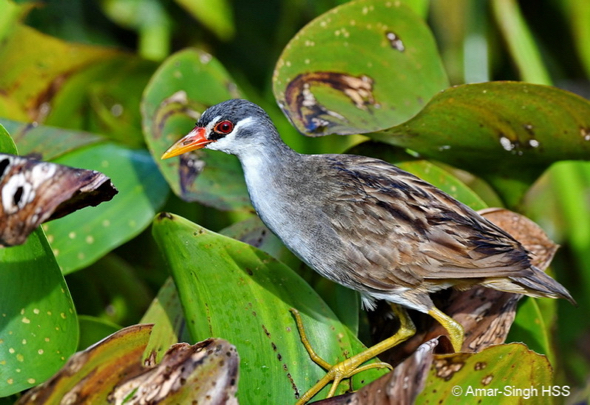 “A number of guides state that the bill is olive-green with a red base. But all the birds I have seen over the years have a yellow-orange bill with a red base; unless there is some change with breeding and I strike only these birds. 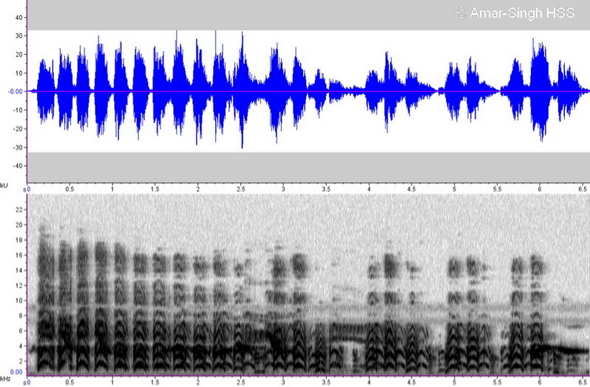 “The image above contains a sonogram and waveform of the call I hear the least often but I am increasingly convinced this is a territorial call. A recording of the call is located HERE. It is a long call lasting 7-9 seconds (6 recordings) and is best described as a trill (or a horse neighing). Often both partners in the pair join together in making this complex call. It starts loud and continues like this for 4-5 seconds before winding down slowly and repeated later.

“This call is the one most often recorded (see xeno-canto HERE, much softer and less noticed.”

Jkai Chan’s video of a White-throated Kingfisher (Halcyon smyrnensis) mobbing a large Malayan Water Monitor (Varanus salvator) shows to what extent the kingfisher will do to defend its active nest. We can only guess that the kingfisher must be nesting nearby. Otherwise why else will it expose itself to the danger of being in turn attacked by the large lizard?

Birds normally attack other birds when the latter intrude into their territory, especially when they are breeding LINK 1 and LINK 2 and LINK 3.

House Crows (Corvus splendens) have been known to be aggressive against humans, attacking people walking under their nest when there are chicks LINK. Similar behaviour is seen in magpies LINK. A Grey Heron (Ardea cinerea) was similarly attacked by a colony of breeding Black-naped Terns (Sterna sumatrana) when the former intruded into the colony PDF.

But a large monitor lizard? A link to a pair of birds attacking a monitor lizard that is ravaging eggs in a crocodiles’ nest can be viewed HERE.

“We saw a number of White Wagtails (Motacilla alba lugens) in Hokkaido (above). M. a. lugens is also called the Black-backed Wagtail.

Below is an adult female feeding young with prey, largely dipterans.