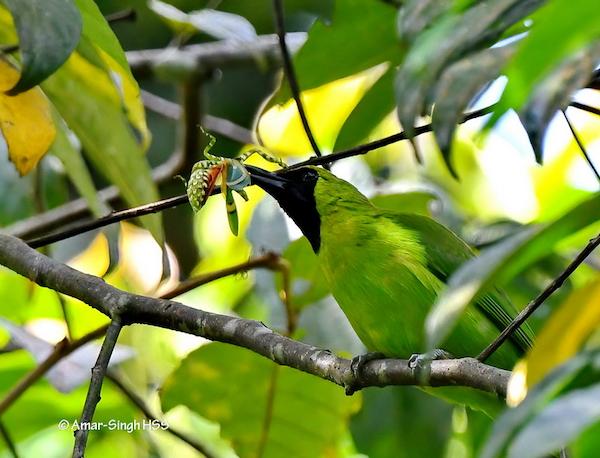 Genetics of colour inheritance between the various species and subspecies of colugos is not well understood. It is difficult to study the animals in the wild and they do not thrive well in captivity.

The video below, taken at Lower Peirce Reservoir Park, Singapore shows a reddish mother and her grey-coloured baby.

NOTE: Names of contributors are listed in alphabetical order and not in order of importance.

Sexing of Zebra Doves (Geopelia striata) is best identified by courtship behaviour with male bowing and displaying. When not mating physical sex differences are subtle and not necessarily consistent. Calls between sexes also do not appear to be different. Gibbs, Barnes and Cox (2001) suggest that in females the barring in the breast is more extensive (extends further onto the breast) and the pinkish centre to breast more restricted in extent.

Having observed this pair of mating I was sure of the sex. The composite image (identical post image processing) shows the male on the left and female on the right. The differences are subtle.

The changeable hawk-eagle (Nisaetus cirrhatus formerly Spizaetus cirrhatus) is also known as Indian crested hawk-eagle. There are varying colour forms in different regions of the world.  Some forms are crested and yet others are not crested. The taxonomy is still in flux as genetic studies have not been able to elucidate the relationship between many of the species. There are also differences in size in different regions. The diet comprises other birds, reptiles and small mammals.

The paradise tree snake (Chrysopelea paradisi) is also known as the paradise flying snake as the snake is able to glide in the trees. The snake can grow up to 1 m in length. Its venomous fangs are located at the back of its mouth. It is arboreal and hunts in the day.  Small vertebrates make up most of its diet.

Ghim Pin Tan was at Pasir Ris Park on 11 September 2021 and documented a crestless, dark morph dueling a paradise tree snake. The snake aimed for the bird’s head near the eye and thus escaped the bird’s great talons. Snake got to live another day.

Shahrul Kamal observed a changeable hawk-eagle way back in June 2021.  Read Shahrul’s account of the bird’s activities that day.

Today I had the chance to shoot the CHE in good light after a 3 week wait. It perched near the shelter at Car Park B for approximately 15-25 mins and gave up after crows started to harass the poor CHE who is trying to have some rest.

It was ‘harassed’ by a fly (mynah dont quite bother) until it flew towards the pond with the crows in hot pursuit!

CHE must apply for freehold license at Pasir Ris Park tree of its choice. Crows or hornbills got no say.

I spotted a pair of Yellow-breasted Warblers (Seicercus montis davisoni) nesting in the montane forest at Cameron Highlands in Pahang, Malaysia.

I did not approach the nest or attempt to look at it. I stayed about 5-6 meters away. I was watching birds along a road and this pair was actively feeding young and generally comfortable with my presence; entering and exiting the nest while I was nearby. 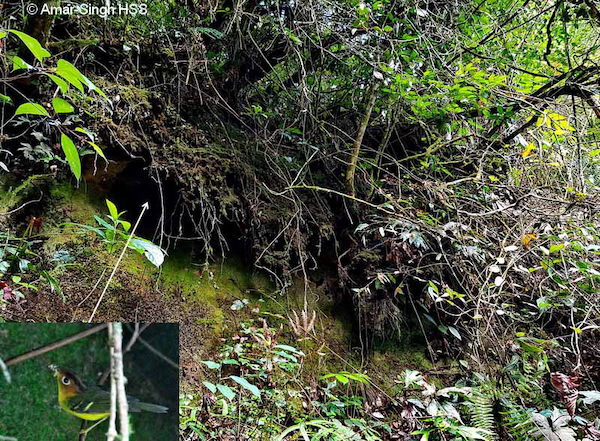 The nest was located 2.5-3 meters on the slope/bank under the roots of over-hanging trees and bushes; the nest itself was not visible (see composite image above). 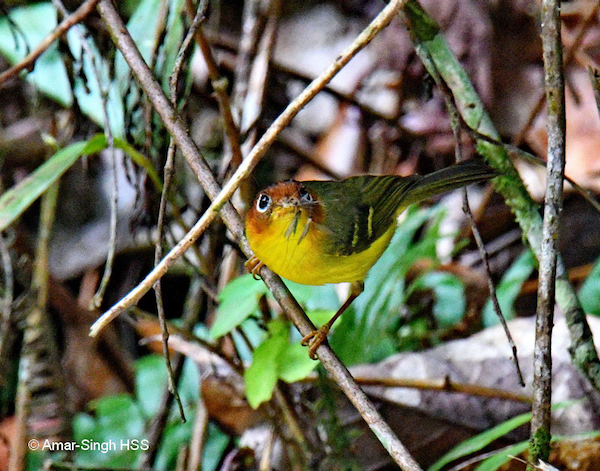 Both partners were actively bringing prey. They collected prey from 5-10 meters around the nest site and items I could identify were caterpillars, spiders and Crane Flies (Tipulidae) – see above. Much of the prey was gleaned from the under surface of leaves and ferns. After having observed numerous episodes, on this occasion and previous visits, I am now convinced that fluttering to obtain prey under foliage is a major hunting technique. They have very high-pitched calls but my recordings were poor (and old age hearing loss failed me). 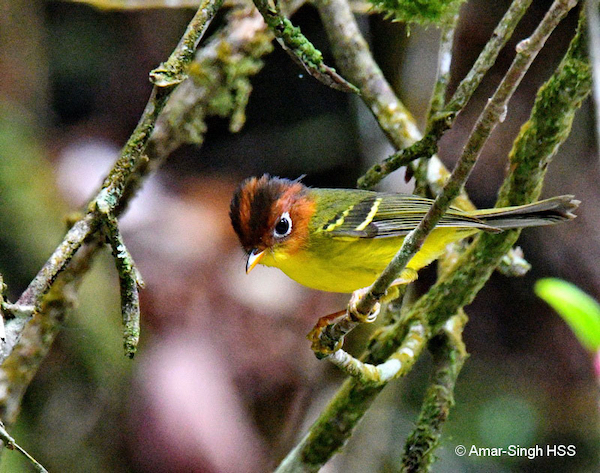 According to Wikipedia, the Yellow-breasted Warbler (Seicercus montis davisoni) is found in Malaysia, Indonesia and the Philippines. It’s natural habitats are tropical and subtropical moist lowland and montane forests. Currently this species has a wide range and a steady population size. As such it is not a threatened species. 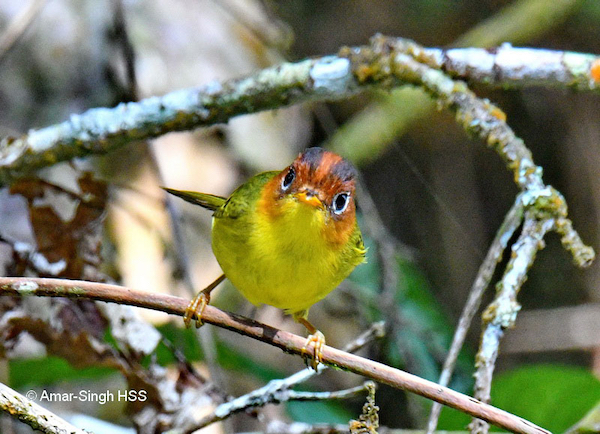 The images shown here were photographed by well-known Malaysian birder Dato’ Dr Amar-Singh HSS in March 2019. He was then bird-watching at 1,700m ASL inside the pristine montane forest in Cameron Highlands, Pahang, Malaysia. 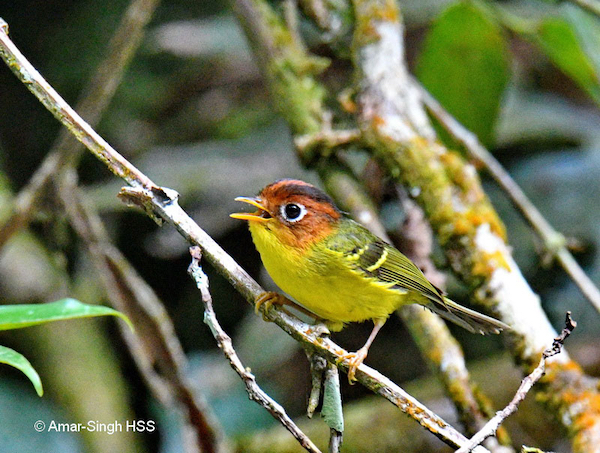 His usual equipment when out in the field comprises a Nikon D500 SLR with Tamron SP 150-600mm f/5-6.3 Di VC USD handheld with Rode VideoMic Pro Plus Shotgun Microphone. 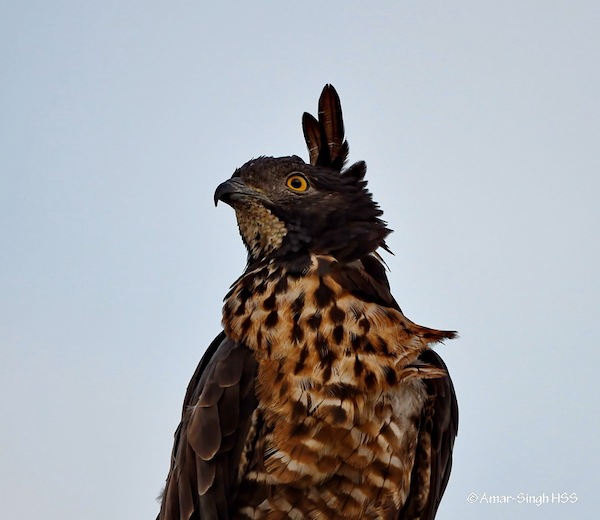 An Oriental Honey Buzzard (Indomayalan) Pernis ptilorhynchus torquatus appeared in our neighbourhood very early this morning. The sun had not risen above the hills and it was still a bit dark. Very blustery morning and the crest was being blown. 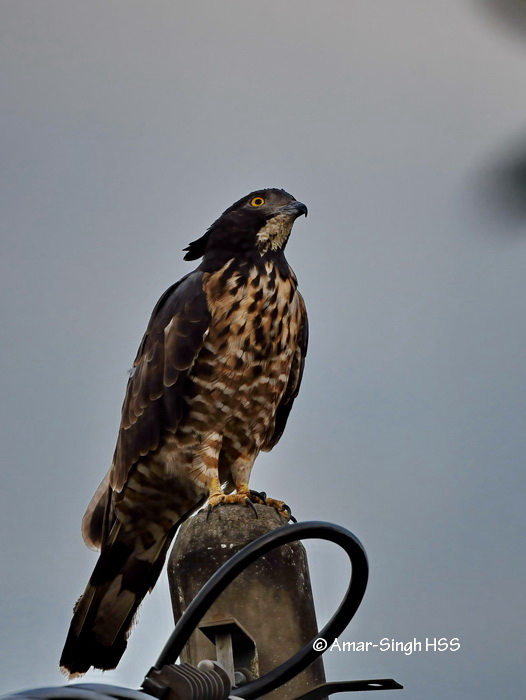 It sat preening for ~15 minutes on an electrical pole and allowed the neighbours (doing their morning walk) to take hand phone camera images. From the tail pattern this is an adult male. 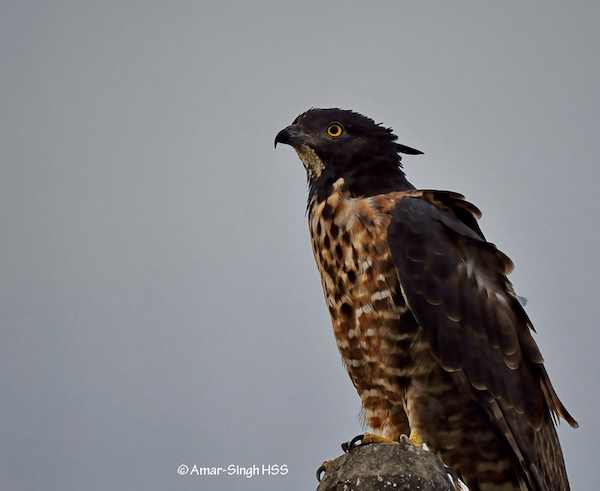 This is the uncommon tweeddale morph resembling a Blyth’s Hawk Eagle plumage with a prominent crest (avian mimicry). Both males and females in this morph have yellow-orange eyes and dark heads. The P. p. torquatus are resident in Peninsular Malaysia. I had an opportunity to watch a male Green-backed Flycatcher (Ficedula elisae) foraging today. It was feeding on the fruits of the Blue Mahang or Macaranga heynei (formerly known as M. javanica), a common fruit source for migratory flycatchers but not noted in literature. 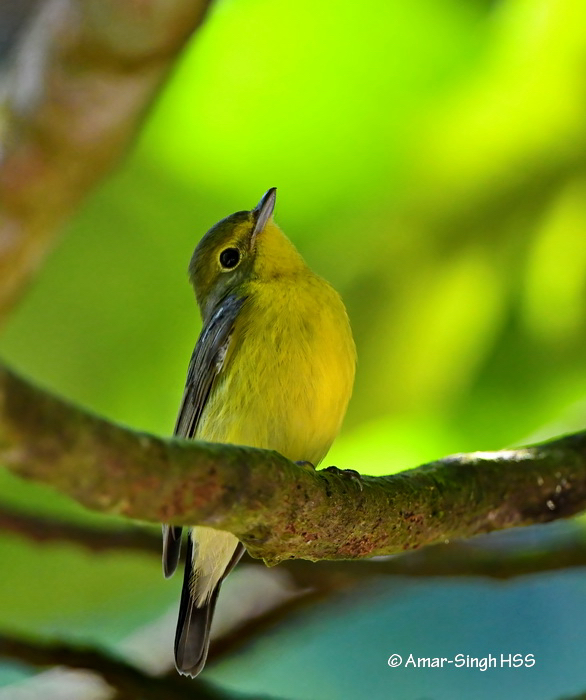 These fruits are taken mainly by fly-by snatches. At one point it appeared curious about me and flew in very close to have a look (no call playback used) – see below. 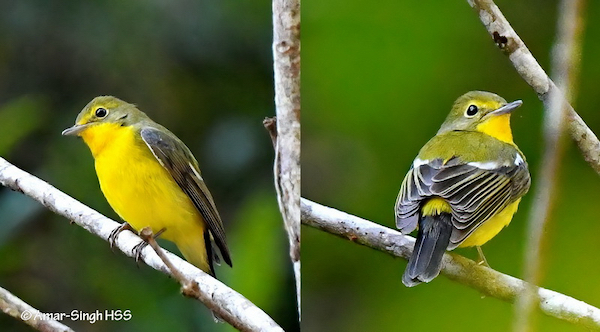 I had the impression, in some views (see above) that the throat was richer than the breast and wonder if this is part of some subtle breeding change? The composite below also shows the yellow rump seen in males. 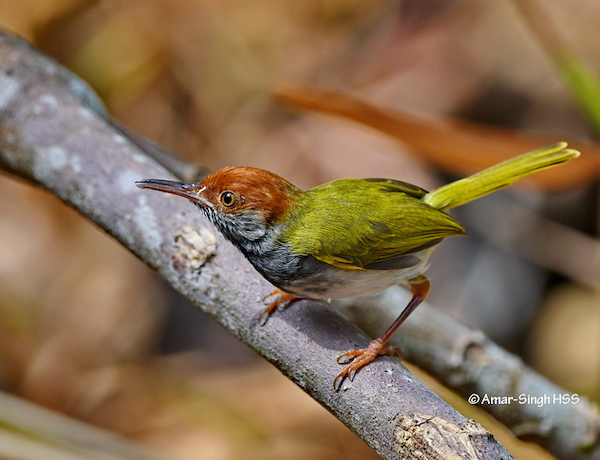 It was interesting to note that this forest location has 3 different species of Tailorbirds – the Dark-necked, Ashy and Rufous-tailed. 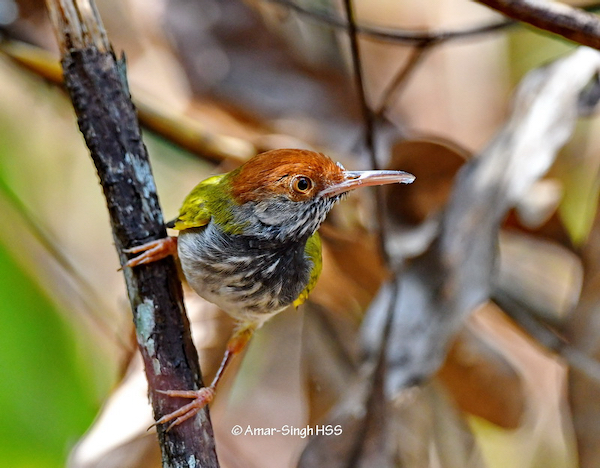 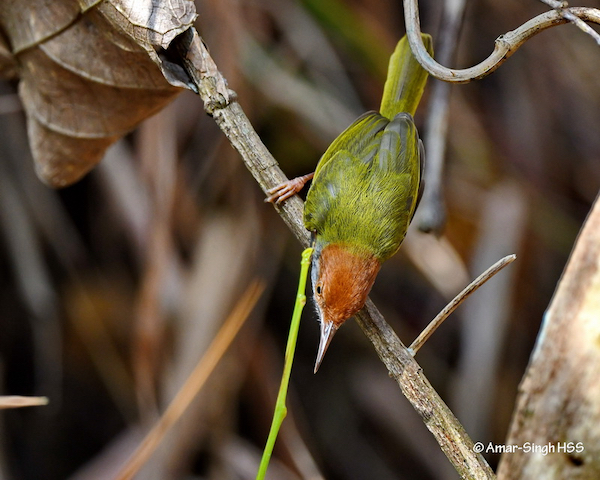 Some views of an adult male Dark-necked Tailorbird, possibly in breeding plumage in view of the extensive dark neck. Was foraging for insect and invertebrate prey and possibly nesting from the behaviour. 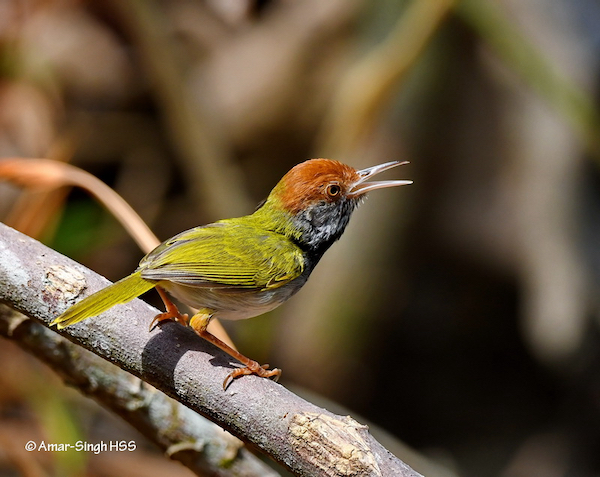 The weather wasn’t favourable this morning as it was drizzling quite heavily at some places.

I had planned to visit this site in the morning to record a lifer, a Terek Sandpiper that I have never seen prior and had to change the visit to the afternoon.

Having missed it yesterday, I was fortunate to be able to see it this afternoon as I was told that it is usually a “one-day bird”

This bird breeds around the northern Siberia in the taiga and a few choose to migrate south to the tropics with individual vagrant recorded every few years!

The bird is in a feeding frenzy and was observed to be moving about frantically in search for food. A flock of Mynahs were waiting for an easy meal when it took a Sand Worm and it was seen dashing about rather skilfully to avoid its prey being snatched. Another behaviour seen was that it would rinse the Sand Worm before eating it.