Poikilospermum suaveolens is a woody hemi-epiphytic liana (woody vine or climber) found in the rainforest of India, southeast China, most of South-East Asia including Malaysia and Singapore. The tiny pink flowers (male 1.5-2 mm long; female 3-7 mm) are presented in globular inflorescences or ‘branched head-like clusters’. The flowers are a favourite source of nectar for many birds, and due to their small size, are usually eaten by birds to get at the nectar they contain (Reference #1). 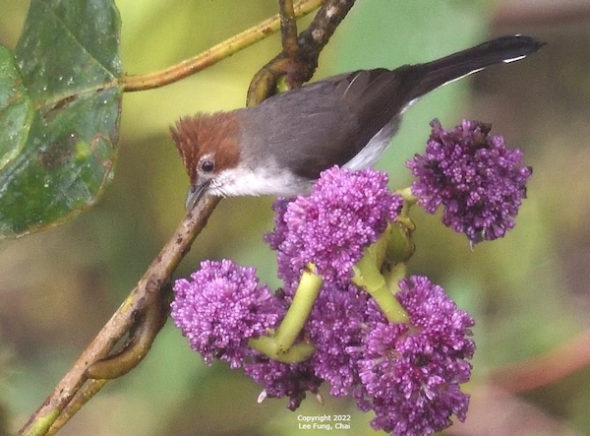 Prior observations have shown the following bird species that feed on the Poikilospermum suaveolens (Reference #2): 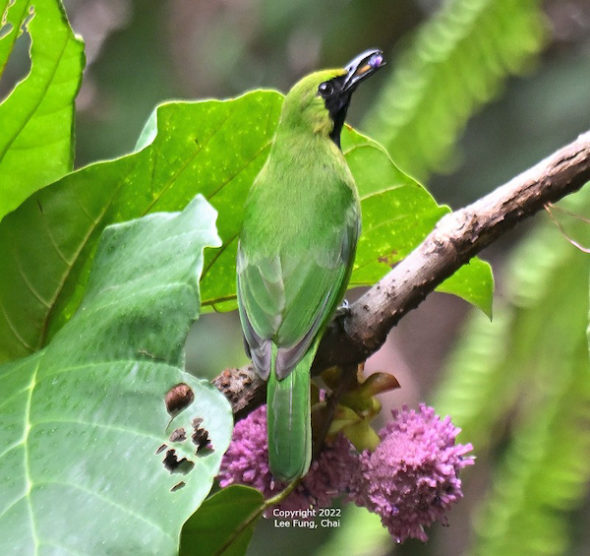 One report from the Ulu Ulu Resort, Temburong, Brunei, Borneo (Reference #5) offers photographic evidence of a number of Flowerpeckers feeding on Poikilospermum suaveolens including:

This report adds another 3 species of birds to the list. 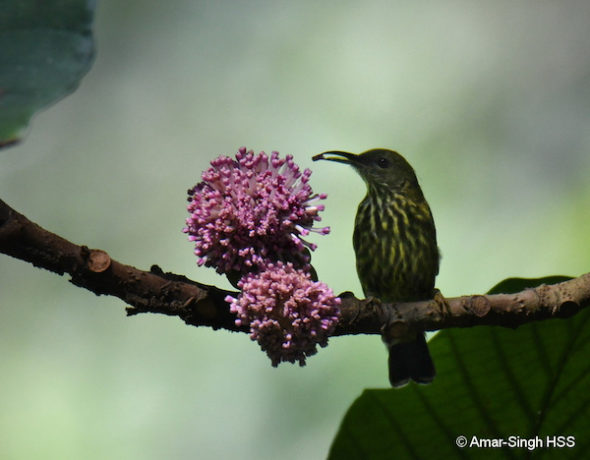 An image search identified the Bohol Sunbird Aethopyga decorosa as another species that uses this nectar source (Reference #6):

The online version of the ‘Biodiversity of Singapore’ (Reference #7) lists the Blue-winged Leafbird Chloropsis cochinchinensis as a species that feeds on Poikilospermum suaveolens, in addition to some birds already mentioned above. 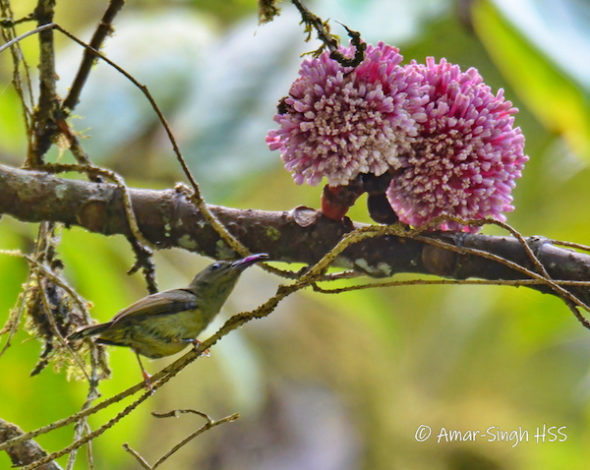 Our recent observations (see images) identify the following additional five species as feeding on the flowers to gain access to the nectar:

In summary 22 species of birds have observed feeding on Poikilospermum suaveolens as a nectar source. There is every reason to believe that, with time, more birds will be added to this list. 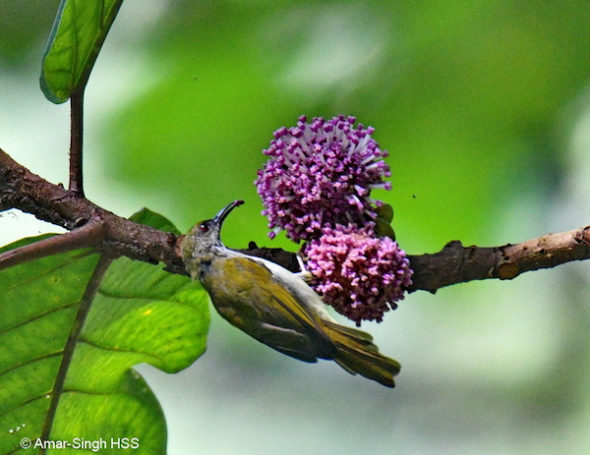 I returned to the flowering Spathodea campanulata (African Tulip Tree) where I again saw 4 species of Spiderhunters feeding on nectar, high up: 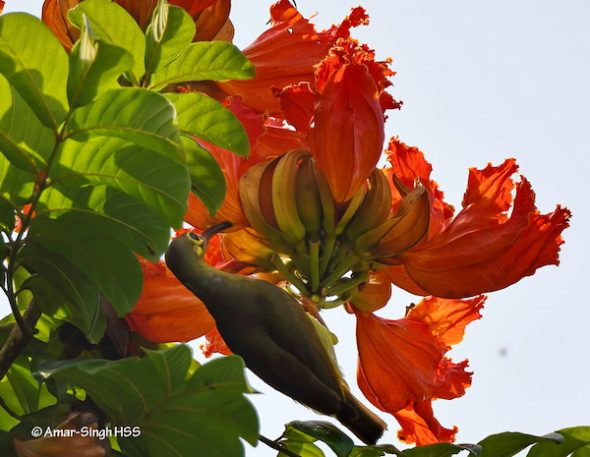 The Spectacled Spiderhunter was the most aggressive species and often chased away the others from flowers or trees. 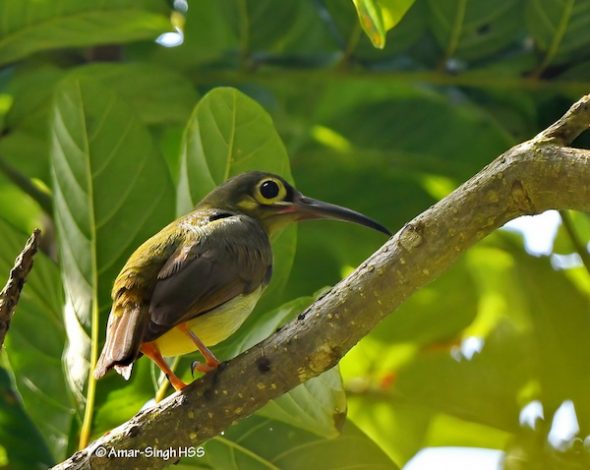 All the Spiderhunters feed on this exotic tree nectar by dipping their heads into the large flowers (Post 1). However I noticed today that the Spectacled Spiderhunter also uses nectar robbing techniques and pierces the flower base to access nectar (Post 2). This may have to do with perch access or just convenience. 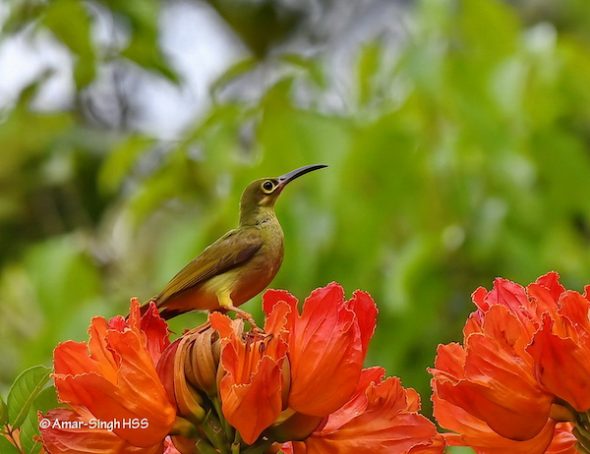 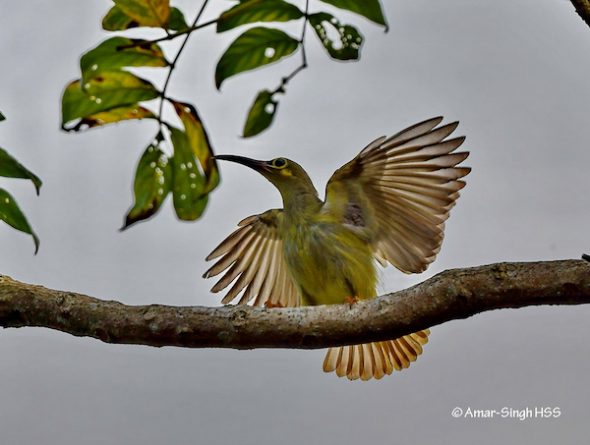 I have watched the Spiderhunters that visit the flowering Spathodea campanulata (African Tulip Trees) extensively and would like to share some further observations. A number of immature birds also visited the trees; in particular the immatures of the Spectacled Spiderhunter (Arachnothera flavigaster). 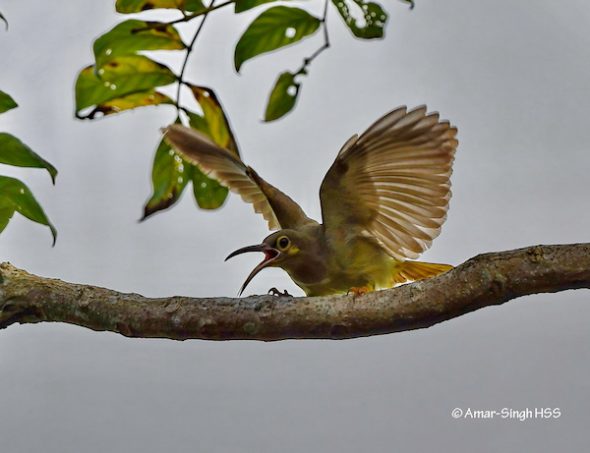 When I first saw this behaviour (Post 1 & 2) I thought it could be aggressive behaviour to chase off other feeding spiderhunters. But I saw these birds also chasing their own species and posturing in this manner towards adult Spectacled Spiderhunters. So this could be immature birds begging for food. 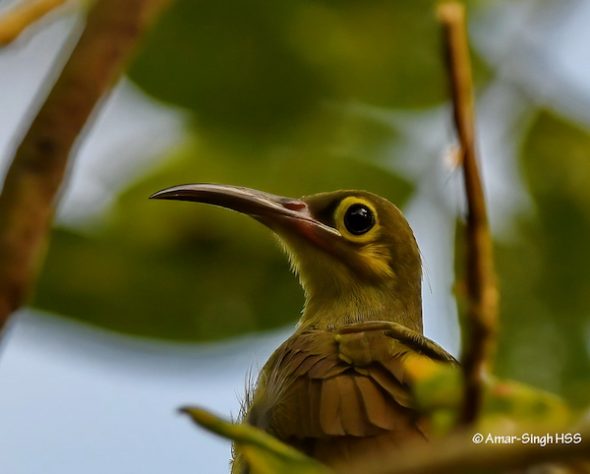 Wells (2007) reports similar behaviour seen before copulation, however I did not observe any mating. This particular bird did this for close to 2 minutes, with calls, allowing me some distant images. I also saw immature Grey-breasted Spiderhunters (Arachnothera modesta modesta) begging for food from adults 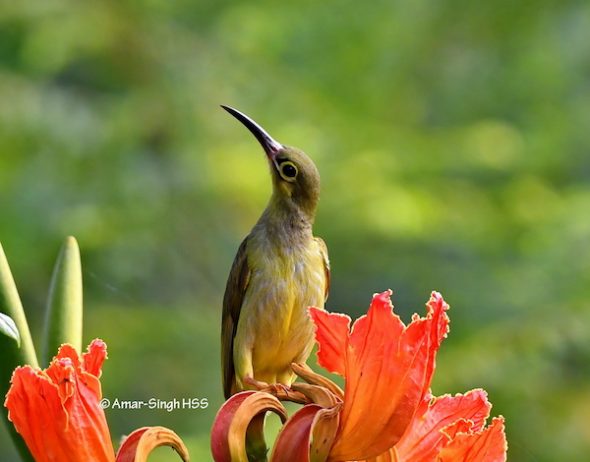 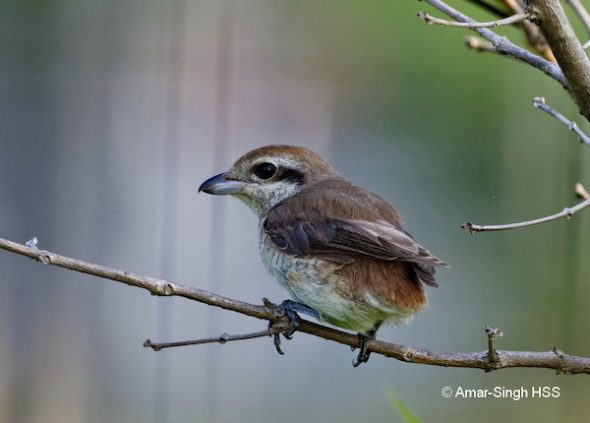 I saw this odd Brown Shrike (Lanius cristatus) today that had no tail to speak of. Either moulting but more likely lost in some traumatic event. 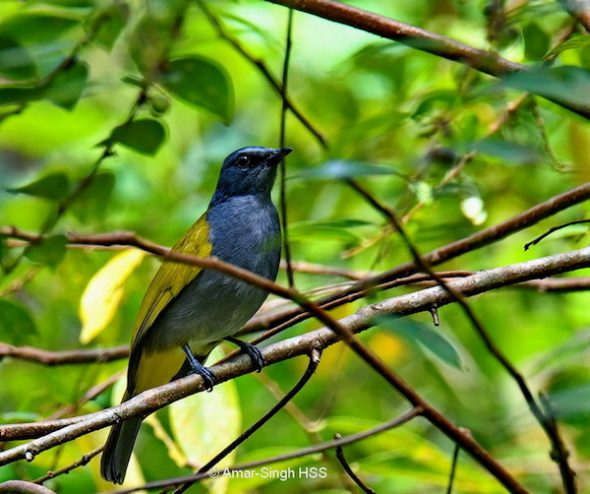 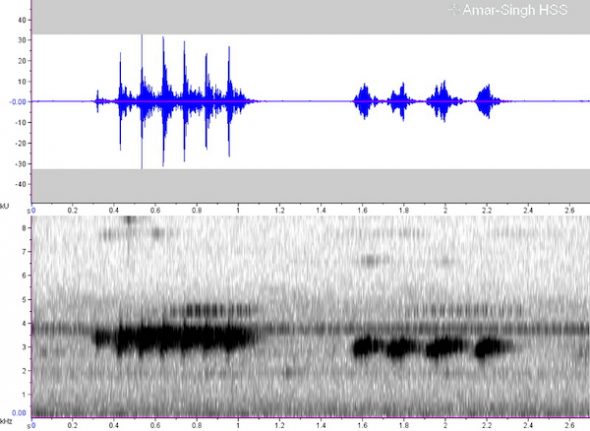 The song and calls of this bird are possibly more varied than currently known. The audio recording (edited with some noise reduction) and sonogram/waveform (above) show two types of calls – a lively pipping call rendered “pi-pi-pi-pi…” (Wells 2007) and another softer “wit-wit-wit…” (HBW 2019). Call recording here: https://www.xeno-canto.org/456756

I had an unusual experience with a Paddyfield Pipit (Anthus rufulus malayensis) today. I arrived at this wetland site around 6.57am and immediately encountered a Paddyfield Pipit calling out non-stop. The total duration, of continuously calling out, exceeded 1.5 minutes, as it had already been calling before I started any recordings. I am sure many of us are used to the hurried burst of 3-4 calls when taking flight or the less common 4-5 notes given when in a high display flight (courtship flight song). But this was something I have not encountered before. The bird was on a small mound of grass and singing, turning the head from side to side. There was no sequence or rhythm to the song. 64 calls were recorded in 75 seconds. The first half of the calls were different from the second half. The first half were the more classical 2-4 notes (occasionally single or 5) that sound like ‘tchep’ or ‘tseep’ or ‘chep’ (Wells 2007, HBW 2019). As the bird continued to all out the nature of the calls changed and became more complex – notes were harder to count, were more closely interspersed and the quality of the sound changed.

A video recording in low light is here: https://youtu.be/omvTzUK8Prc

An audio recording of the calls is here: https://www.xeno-canto.org/468470 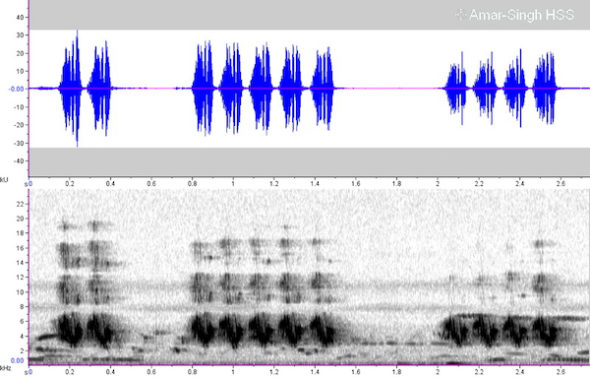 Post 1 is a waveform and sonogram of the first type of calls.

There is some similarity on the sonogram of both types of calls but a good look at the waveforms shows there are different and the sonograms are not identical.

I am making an assumption that this is a Paddyfield Pipit. It was dark, ISO for images was 29,000, making clear DSLR photos not possible. But it is the predominant Pipit for the region and we are at the tail end of the migration season. Once light was up I looked at every Pipit in the area and all were Paddyfield Pipits.If anyone has comments about the ID I would appreciate this. 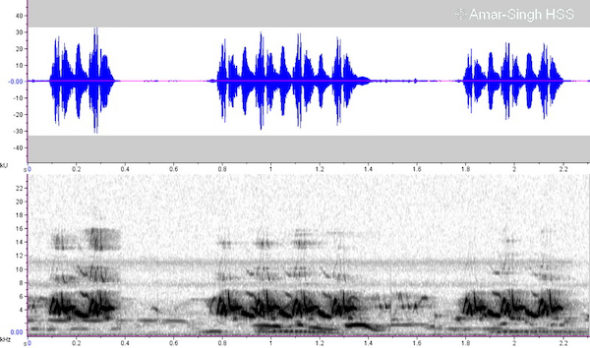 Post 2 is a waveform and sonogram of the second type of calls.

There is a similar encounter by Peter Boesman on 27th March 2016 at 5:45am at the Bundala Ramsar Wetland, Sri Lanka. He notes this as “singing from the ground at dawn”. His recording here: https://www.xeno-canto.org/311151.

The majority of the Paddyfield Pipits I encountered were nesting, some collecting nesting material. I wonder if these calls I witnessed are early morning territorial calls and, because they are made very early, often missed? 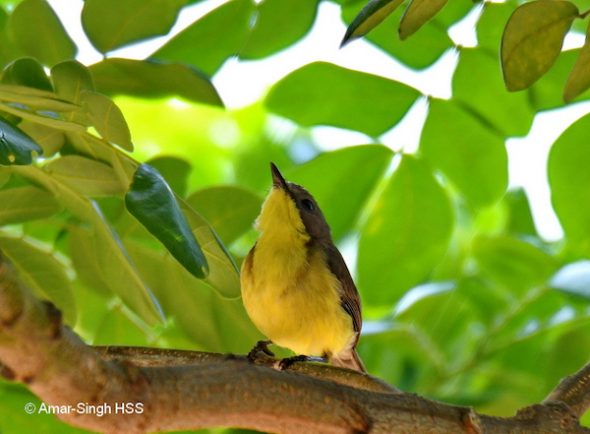 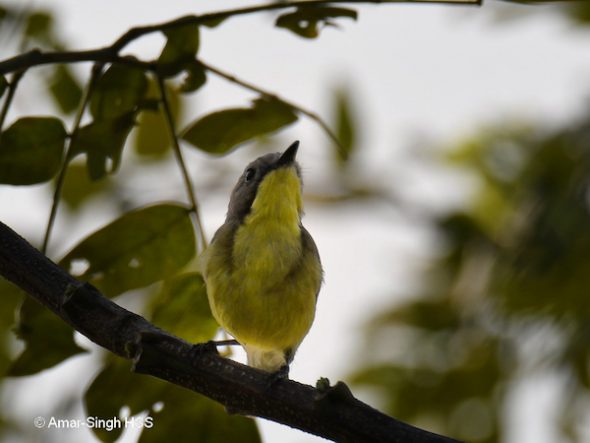 Note a feature that I have not seen described in literature – the symmetrical brown curved lines that come from the base of the neck into the breast but do not meet. 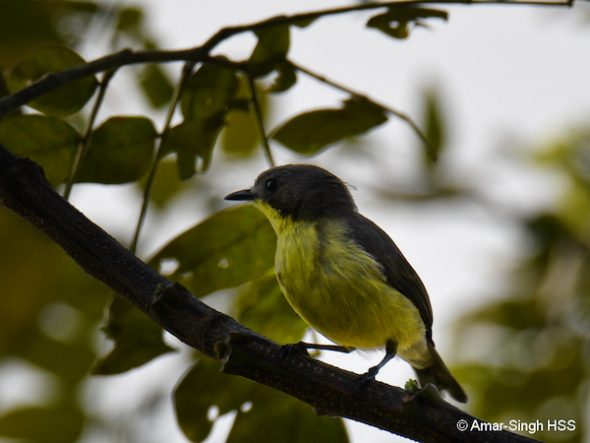 This feature can be seen in the Oriental Bird Club Image Database, especially of the G. s. sulphurea subspecies. Some birds (on-line image search) have it very prominently, others less obvious. I wonder if it is a breeding plumage and waxes-wanes? 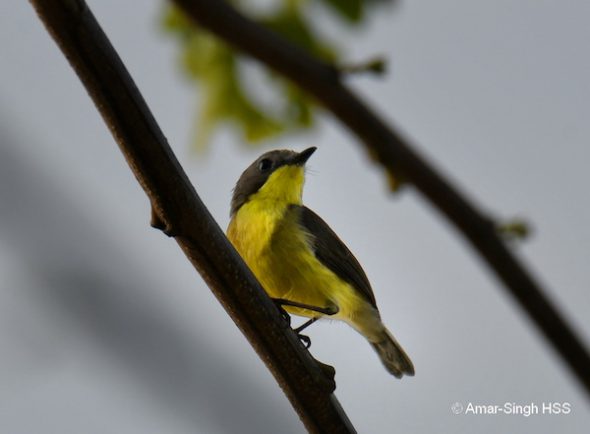 This is a rather long panorama image of part of a Cattle Egret (Bubulcus ibis coromundus) flock; only part is shown. I have detailed individual images and there are more than 414 birds in the flock. This is not a roosting flock but a group resting on Eichhornia crassipes (Water Hyacinth) and preening together in the mid-morning after feeding. 50-60% of them have some breeding plumage and about 10% have bill facial skin breeding changes. There were other Cattle Egrets nearby on trees and large bushes. 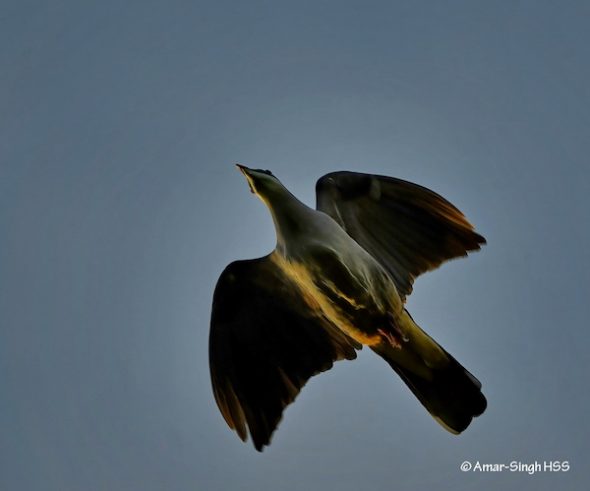 Mountain Imperial Pigeons (Ducula badia badia) are known to forage in the lowlands and I have seen them a number of times at different locations. 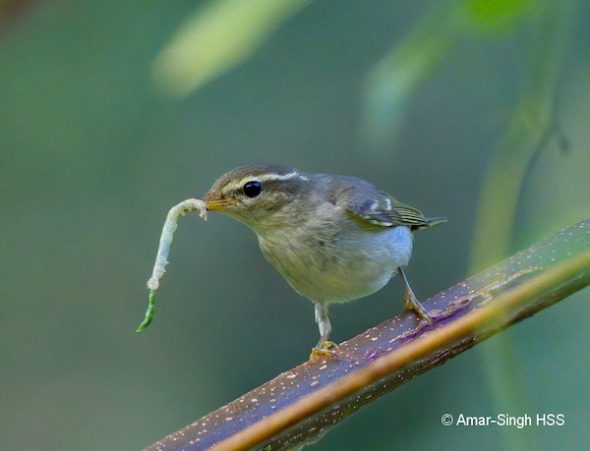 I saw this Phylloscopus warbler (dark green leaf-warbler) that was feeding on a caterpillar. The key features include: 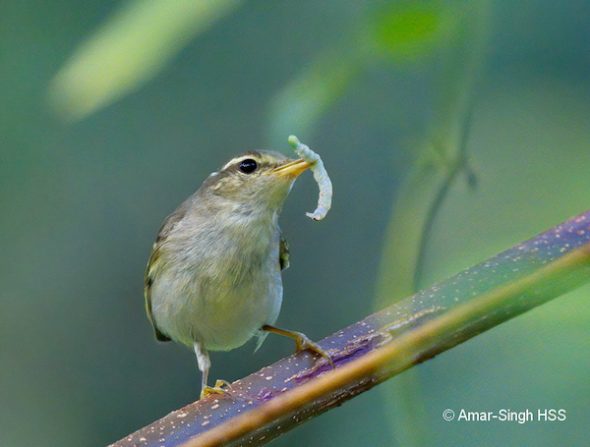 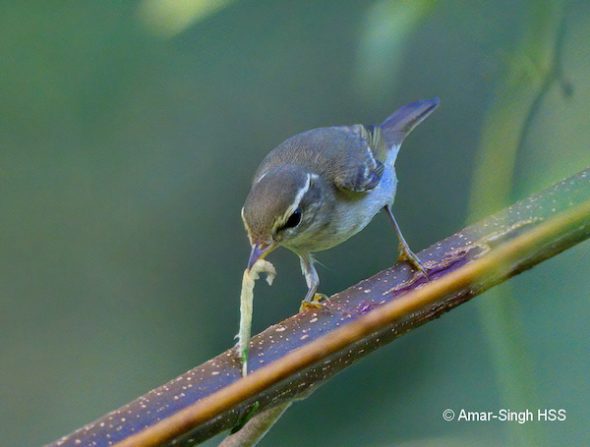 Note that feeding just 2-3 meters away from this bird was an ‘Arctic Warbler’ (unsure which one).