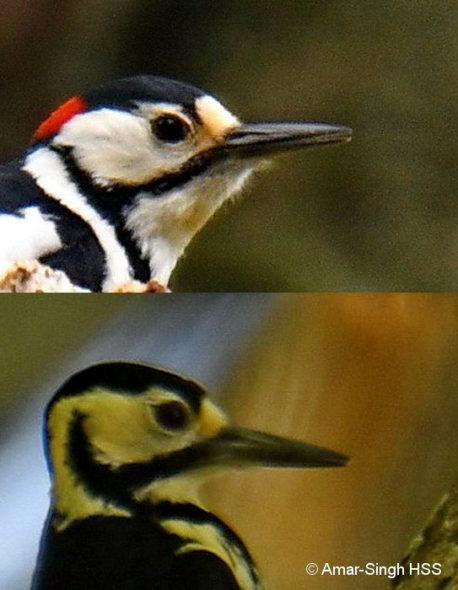 The composite I put together (above) to illustrate this is of a male Great Spotted Woodpecker (above, sorry no female images) and a female White-backed Woodpecker below.

Wong Kais encountered a family of Paradise Shelducks on 5 & 6 November 2014 when he visited Zeelandia Te Māra a Tāne, a wildlife sanctuary in Wellington, New Zealand. This wildlife sanctuary of 225 ha is completely fenced to give the native species a chance at restoring their decimated  population.  It is a popular tourist destination located just at the fringe of Wellington city.

Interesting Snippets: The ducks are rather goose-like and are good game birds. The goose-like characteristics include their rather large size, long necks and charging at perceived threats like geese. They are endemic to New Zealand and can be seen in open grasslands with water bodies including in public parks.

The birds display inverted sexual dimorphism. The females are more colourful with white coloured heads while the males are more drab with black coloured heads. Eggs are laid from August – October each year.  The eggs are incubated for 30-35 days. The fledging period averages 8 weeks.

The ducks feed on grass, earthworms, insects and crustaceans.

The photographs in the photo gallery and 3 videos of this shelduck family are all copyrighted to Wong Kais. 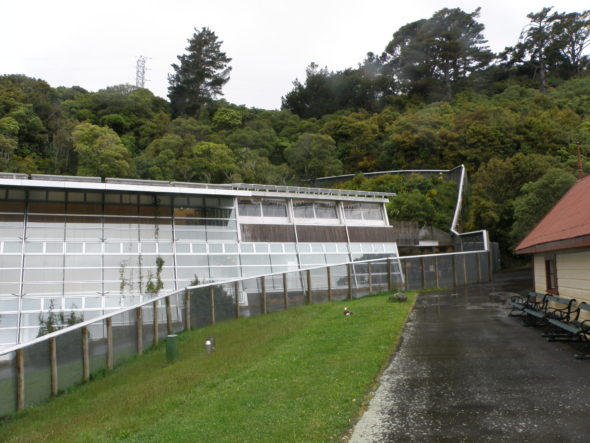 Photo 13. The mother duck seen inside the sanctuary.Article by Teo Lee Wei 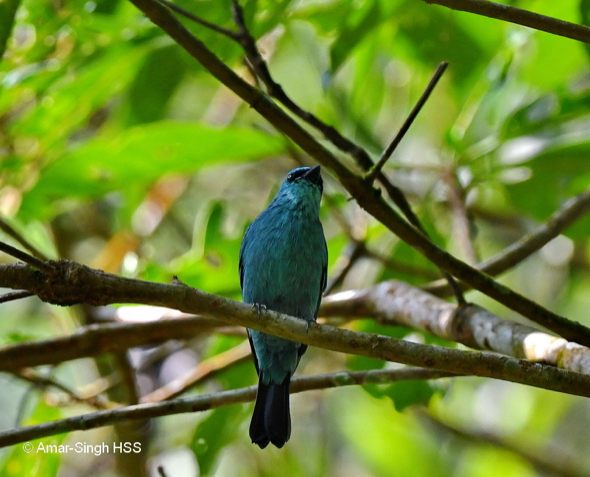 “I saw this ‘blue’ Flycatcher calling high in the jungle canopy. There were two birds but I only imaged one (above, below). Images are not great but it is most likely the Verditer Flycatcher (Eumyias thalassinus thalassoides) but I could not see the ‘diagnostic’ patterned lower tail-coverts well. I am careful not confuse it with the Pale Blue-flycatcher (Cyornis unicolor cyanopolia) which has shorter tail, longer hooked beak and brown plumage in the female.

Above is an audio recording of the calls and below a sonogram and waveform (ignore upper bar in sonogram which is due to rushing stream). HBW (2019) describes calls as a “short and plaintive ‘pseeut’” which sound like what I heard.
Appreciate any opinions. 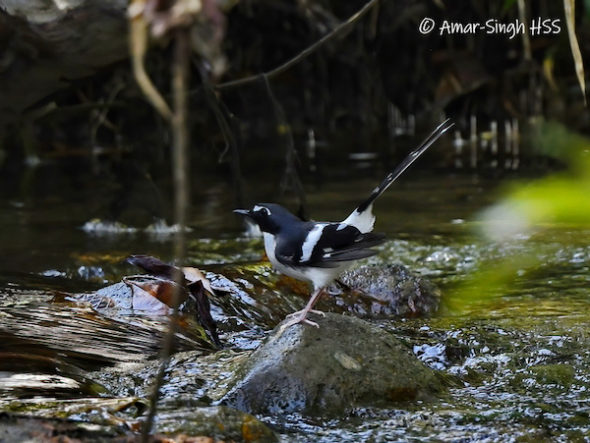 I saw this Slaty-backed Forktail (Enicurus schistaceus) at a jungle stream on the outskirts of Ipoh, Perak, Malaysia today, 15th April 2022. I suspect from calls and movement that there were two birds. I checked the map and the location where I saw the bird was at ‘sea level’. It is very odd to see this generally highland species so low. 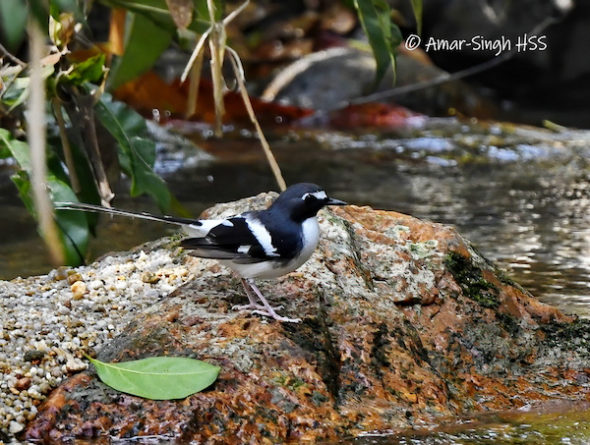 Wells (2007) does not record this species below 800m ASL on the peninsular.

Ebird records for Peninsular Malaysia are all highlands or hill station records. However, one record by WK Liew in April 2021 is from Sungai Congkak Recreational Forest, Hulu Langat, Selangor, which may be at ~200m ASL. 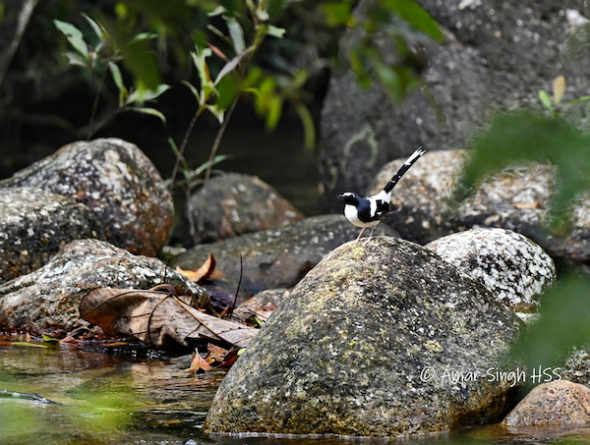 Appreciate any feedback on observations noted in lowland locations in Peninsular Malaysia.

Rosli Omar’s comment: https://rosliomarphotography.com/: At sea level, that’s amazing. In my book Birds of the Forests of Peninsular Malaysia, I stated the old Birds I Witness records with one at Kuala Juram at about 190m.

Amar responsese: Appreciate that vital information. It appears that the range of this bird is wider than previously known or reported in literature.

Syafiq comment: From Birds of Thailand (2018, Lynx) by Treesucon, U. & Limparungpatthanakij, W., …Forages on rocks in and beside larger, more open rivers in wooded regions at 200 – 1800m.

It is possible that what you observed is unique since I am not aware of any previous records of Slaty-backed Forktail at ‘sea level’.

Any idea from which river the stream originated, and how far upstream (elevation) is the river’s source? Is it above 200m?

Amar’s response: I am aware that populations outside of the Malay Peninsula breed at lower altitudes.

Down to 300m in the Himalayas (wintering down into adjacent plains) and recorded at 400m in Thailand (Birds of the World). But our populations have largely been above 800m.

It could be that side-streams feed into this river from the highest peak (1000m) but not the main stream.

David Wells comment 1: First question, does this stream system run off hills that regularly carry a Slaty-backed population, ie., could this bird have wandered down its home stream, or would it need to have flown in  from some other stream system?

Amar’s response: I have never seen Slaty-backed Forktails at this site. A location I have visited regularly (15-20 visits per year) since 1988 – it is my primary bird watching patch. But I have only climbed hills in the area only up to 800m. I have only seen Chestnut-naped Forktails at all elevations.

The nearest higher hills (above 1000m) are all >25km away and interrupted by extensive lowland/human habitation in between. This location is a small range of hills (highest mentioned before at 1000m) surrounded on all sides by city, development, agriculture.

Second Question, could it be that there are no, or no longer, any competing Chestnut-naped Forktails on this particular stream system? Whatever the answers, the suspicion has to be that something is going on in the highlands that is stressing its home population.

I am not aware of logging upstream to pressure birds to come down – the streams in the location are all still very clear & no logging trails going in. 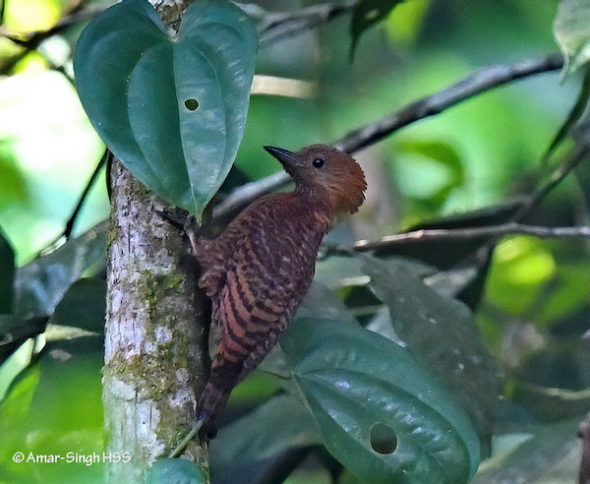 I observed a family unit of Rufous Woodpeckers (Micropternus brachyurus) on 10th August 2020 along a primary jungle trail at the Kledang-Sayong Forest Reserve, Ipoh, Perak, Malaysia – an adult female, adult male and one juvenile bird. They were foraging in thick vegetation (I have seen them feeding close to the ground). I could not get close but offering some images of the juvenile (above and below). 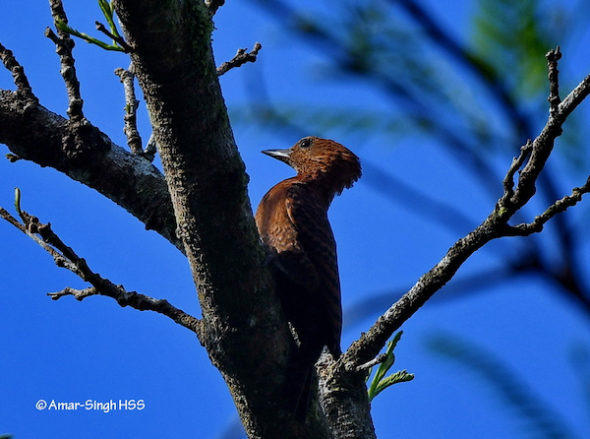 Earlier on May 28th 2020 at the urban environment in Ipoh, I had an opportunity to listen to another Rufous Woodpecker make advertising calls, from a perch. Calls are a loud peal of notes that come out in a burst, often uttered 20-30 seconds apart (or longer). They vary in number of notes and duration. The ones I recorded had 11 notes but I have heard a range of 8-12 notes (Wells 1999 says 4-16, commonly around 8; Birds of the World says up to 16 notes). The duration of the full call I recorded was 1.35 seconds but have heard durations of 1.5-1.7 seconds. There is a slight up lift then a decrescendo component to the call. A sonogram and a waveform are shown below – note the layered natured of the calls, spanning a large frequency range of 1-21 kHz. I guess this is what it really means to ‘cover all your bases’. 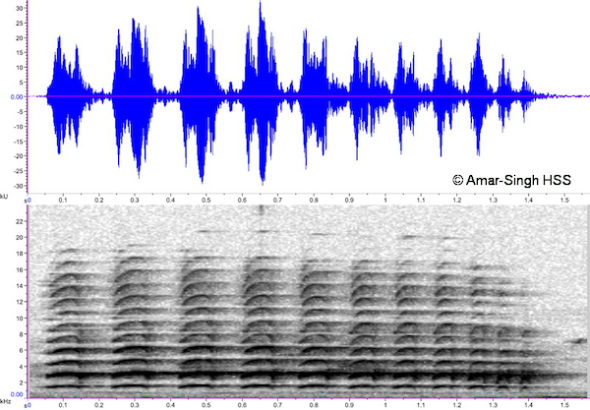 A sonogram and a waveform. 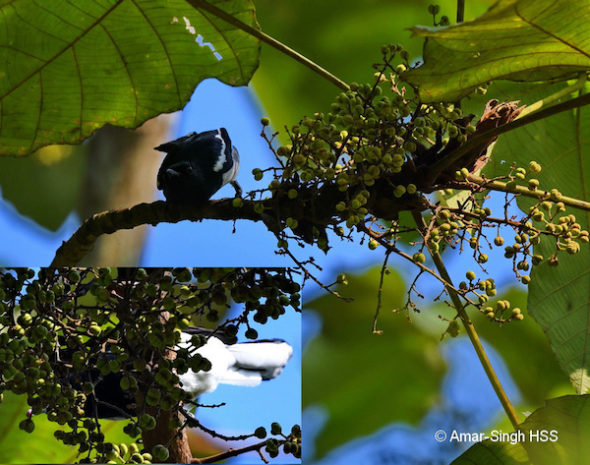 Birds that I have personally observed feeding on the Giant Mahang (Macaranga gigantea) fruit include: 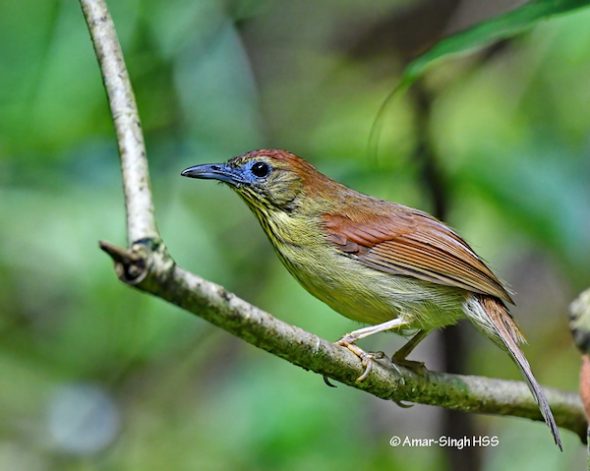 I watched a pair of Pin-striped Tit-Babblers (Mixornis gularis gularis) call out in the mid-morning as they forage in the undergrowth. 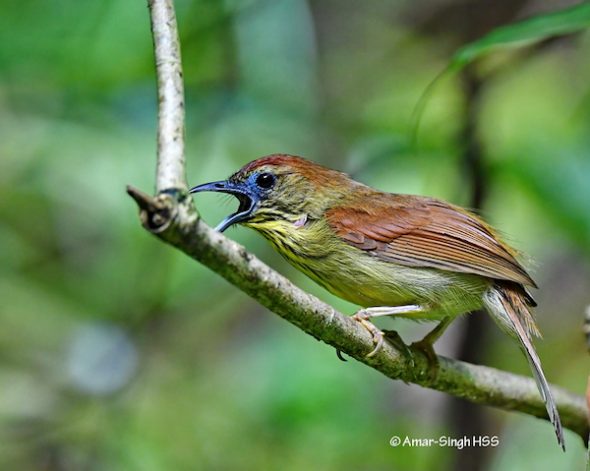 One spotted a large green caterpillar that was then branch swiped. 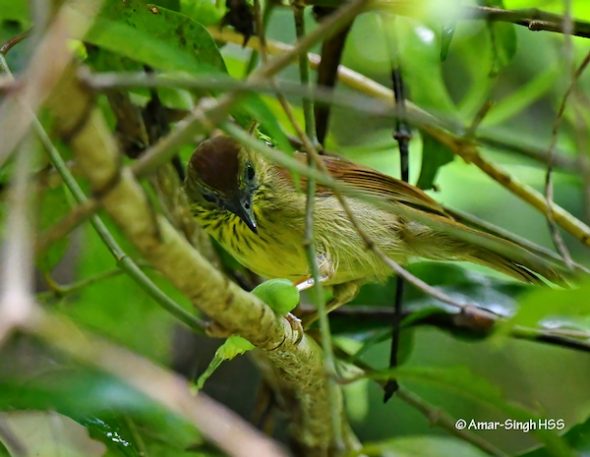 It may be my fancy, but it did appear as though the bird knew it had to drain out the internal fluids (juices) of the caterpillar (see above). It was collected and taken to feed juveniles. 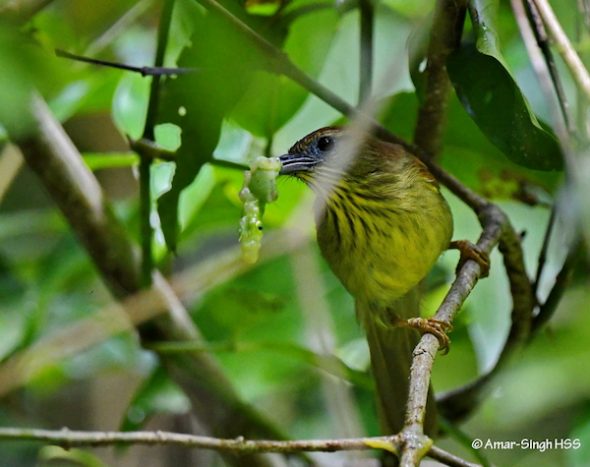 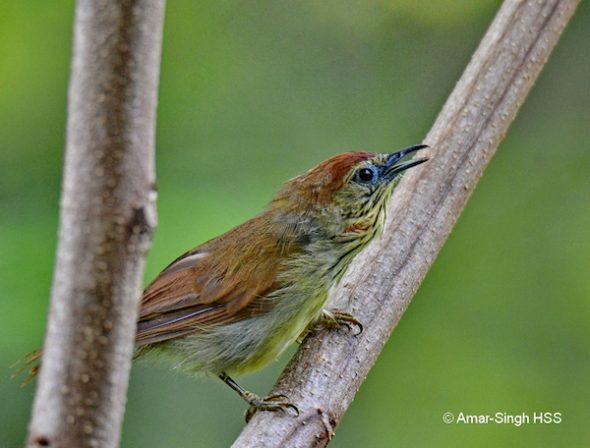 The commonest babbler to encounter locally is the Pin-striped Tit Babbler (Macronus gularis gularis). And I watched a pair for some time as they foraged in the morning at the fringe of this forest reserve (above). 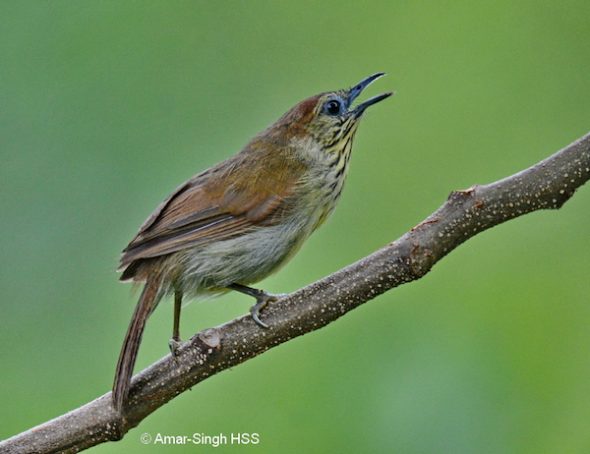 I personally enjoy listening to the contact calls they make. When making these calls most of the time the throat is puffed up (above) and the beak open. About 10-15% of the time the bird arches the back and points the beak skyward when calling out. 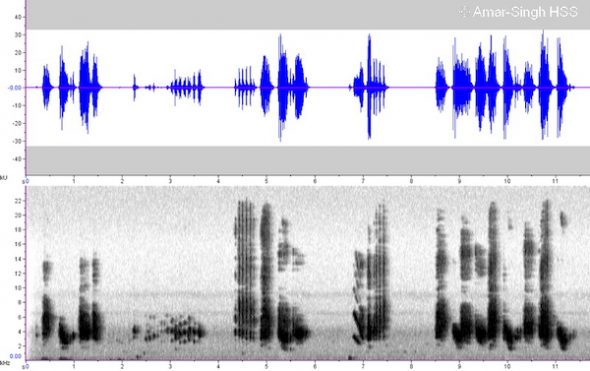 The calls are described as a harsh “chrrrt-chrr” or “chrrrt-chrr-chrri” (Robson 2002), but are very variable. A sonogram and wave of a short segment in shown above. A call recording here of this pair: https://www.xeno-canto.org/488919 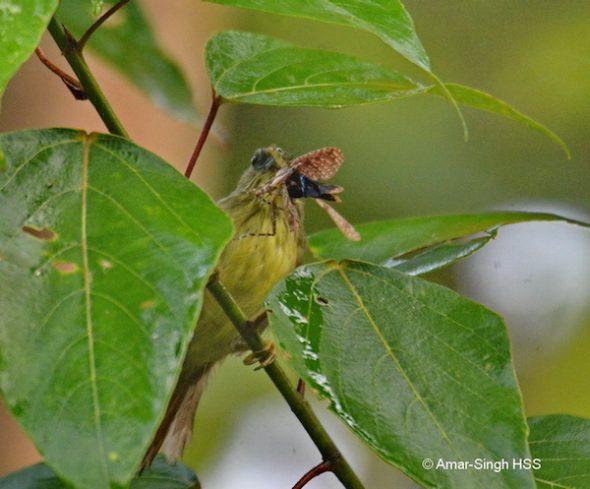 An adult with a large flying insect is added as an addendum (above). 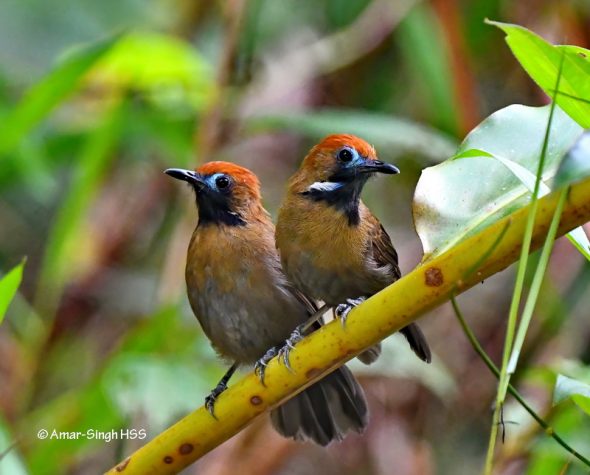 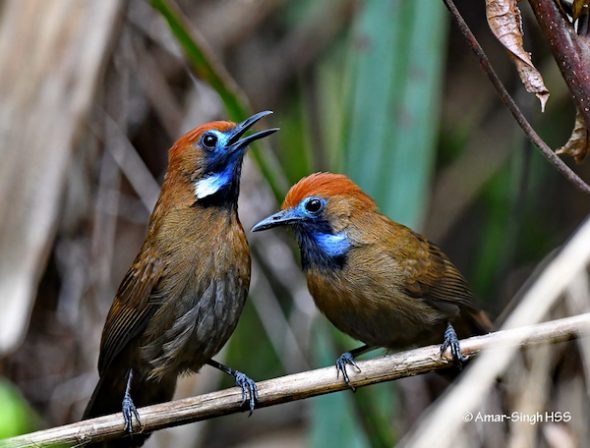 Initially a family unit of 4 birds (one bird seen was a juvenile); at another time was a pair of adults located about 1 km from the first group. The pair was in better lighting and offered an occasional image of these dark-undergrowth-loving birds. 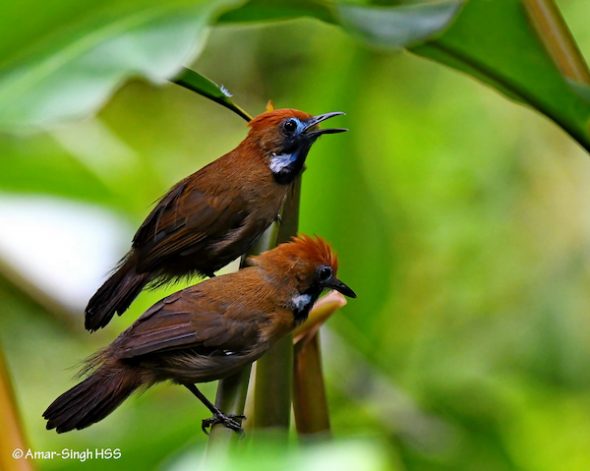 Note that one adult has some tail moult (bird on the right when seen together – above). This bird would initiate the calls and the second bird offer a ‘duet’ response; so it could be the male, assuming the male initiates calls. 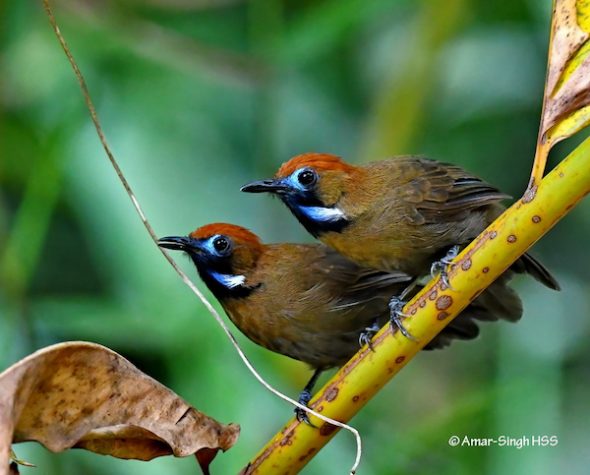 When calling out, the lead bird tends to bow down and the throat swells. 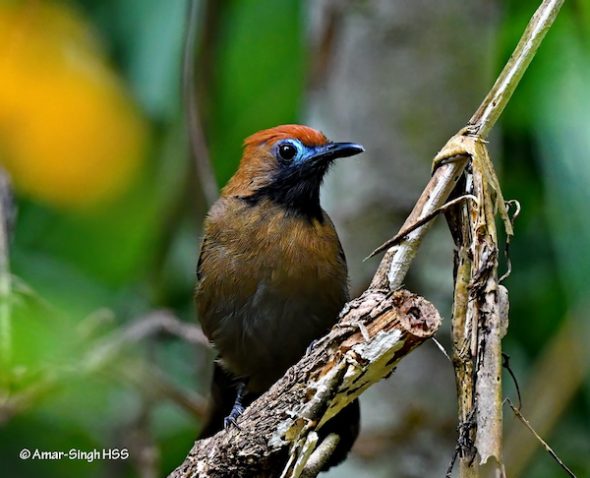 Also when calling the ‘silky white feathers’ (Wells 2007) at the throat are exposed. 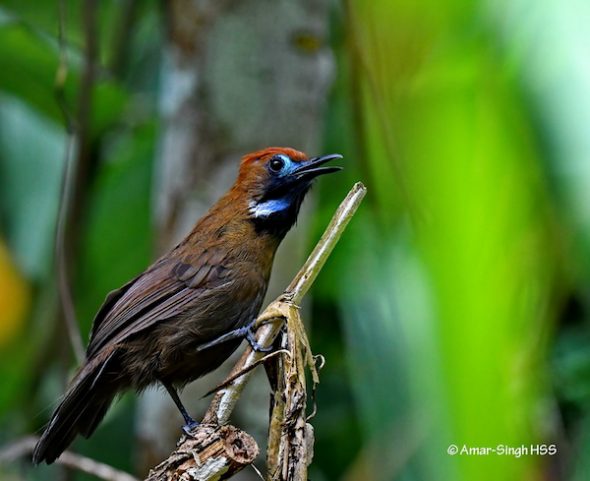