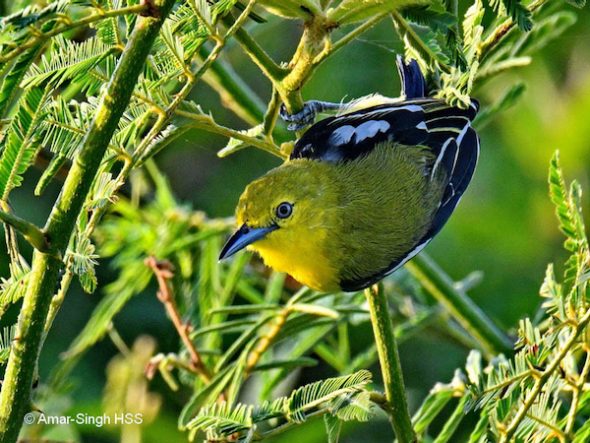 Although the Common Iora (Aegithina tiphia horizoptera) is common, just as its name implies, it never fails to delight. 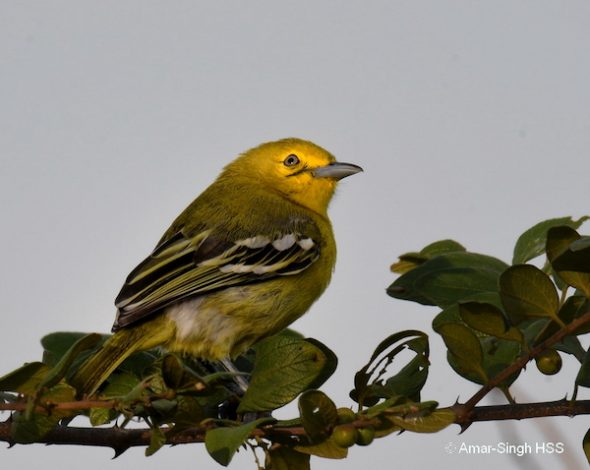 I observed a Lineated Barbet (Megalaima lineata hodgsoni) that was nesting, hunting for prey for the juveniles. It explored the crown of a Sea Almond Tree (Terminalia catappa) and inspected under a number of the leaves; managed to get a large insect (see inset) for the young. I am unsure of ID of this insect. 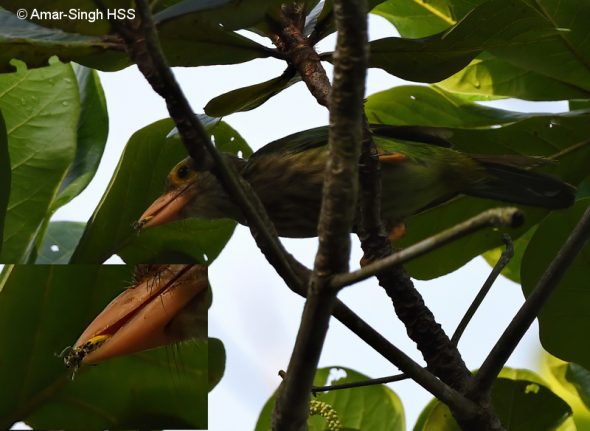 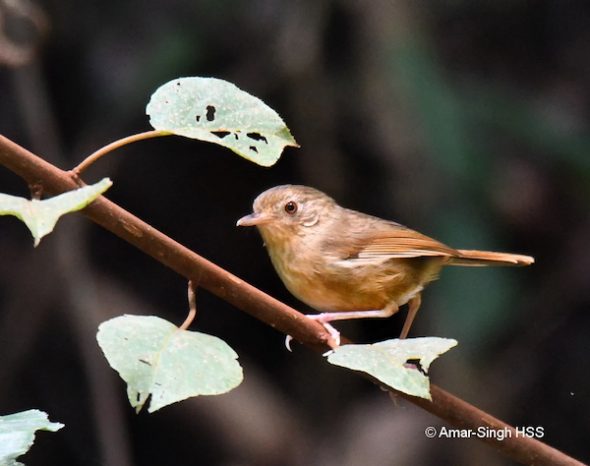 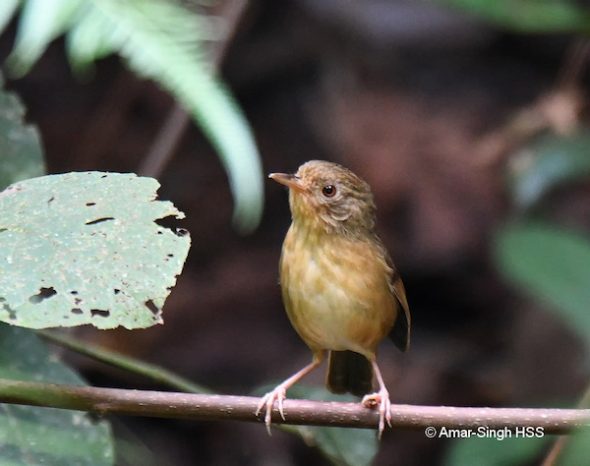 I heard the Buff-breasted Babbler (Trichastoma tickelli tickelli) at a number of locations but spotting this under-growth specialist was tough. Rarely shows itself, and that in dark environments (image ISO 5,000-10,000). 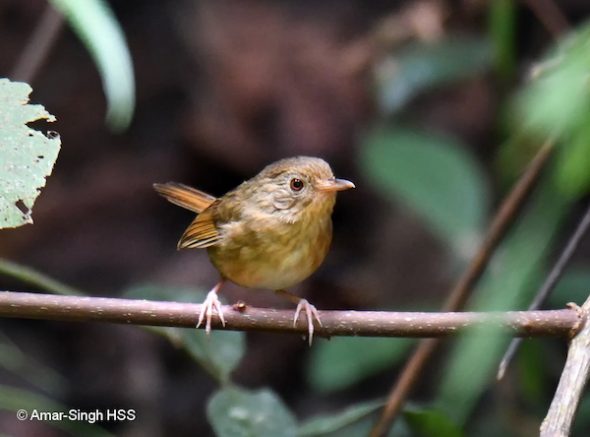 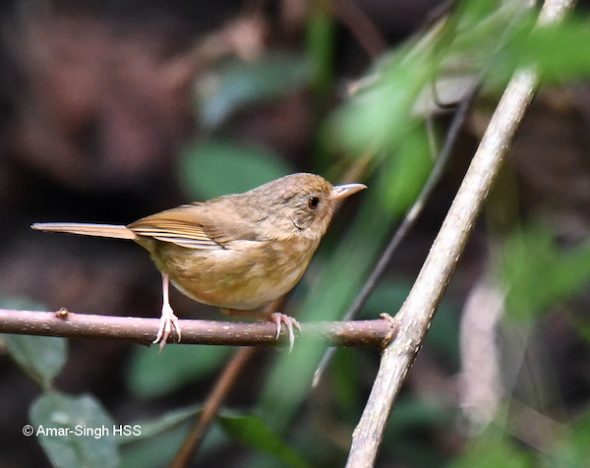 The classical calls are easily identified once learnt and an audio recording, waveform and sonogram are shown below. 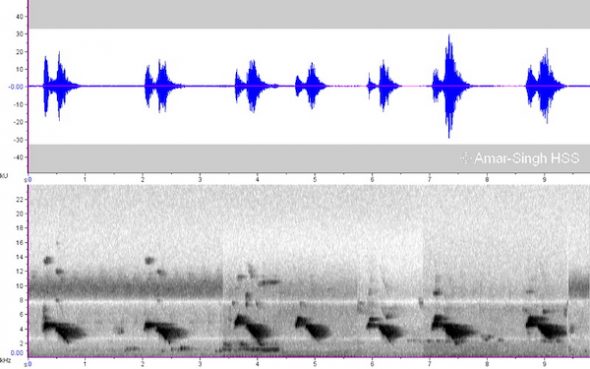 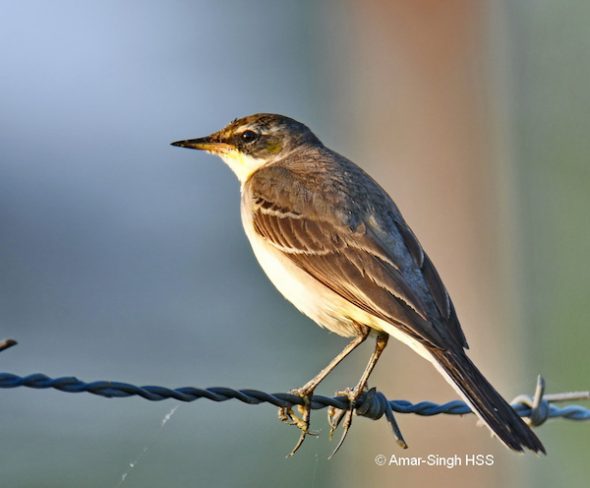 Some Yellow Wagtails allow a closer approach and offer good views/images. I am going to offer two such birds and ask for opinions; failing which we’ll just call them ‘Yellow Wagtails’. I have framed some questions for myself for thinking. I am also using good work/descriptions by Bot et al 2014: Sander Bot, Dick Groenendijk & H Herman van Oosten. Eastern yellow wagtails in Europe: identification and vocalisations. Dutch Birding 36: 295-311, 2014 (available online). 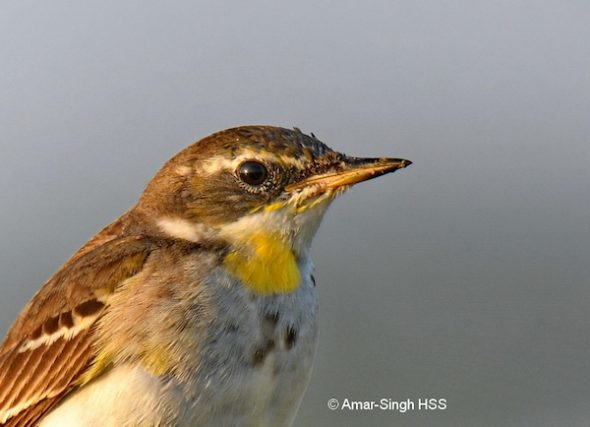 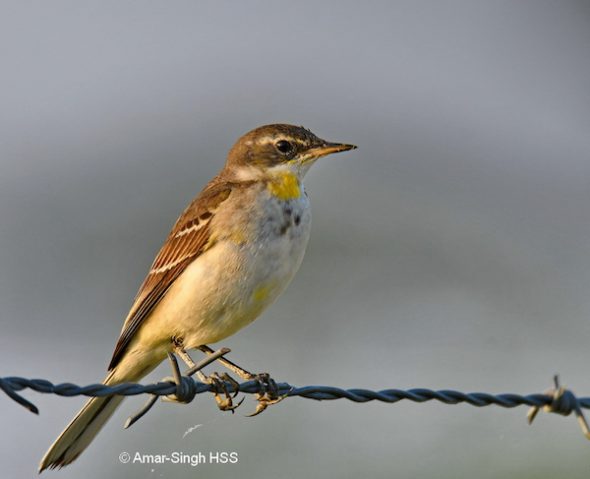 Is it a first winter bird?

Initially I considered this to be a first winter – there was some suggestion of a gape. I am not good with moulting or unmoulted juvenile-type feather in wing coverts; so cannot comment there. But the bird has a more brown-and-yellow plumage rather than the grey-and-white plumage that can be seen in some first winter birds (Bot et al 2014 states that in “M. f. tschutschensis, one-third to almost half of all first-winter are grey-and-white”. Aymí 1995 & Alström et al 2003 state that “Grey-and-white birds are often females”). Also the nice patch of yellow on the throat with dabs of yellow on belly and sides of breast so early in migration suggest an adult. But there is no yellow in undertail-coverts. Appreciate opinions.

Which sub-species is this?

A daunting identification when seen outside their breeding areas and in non-breeding plumage. However the prominent supercilium supports either M. f. tschutschensis or M. f. taivana. No calls were heard to offer support. 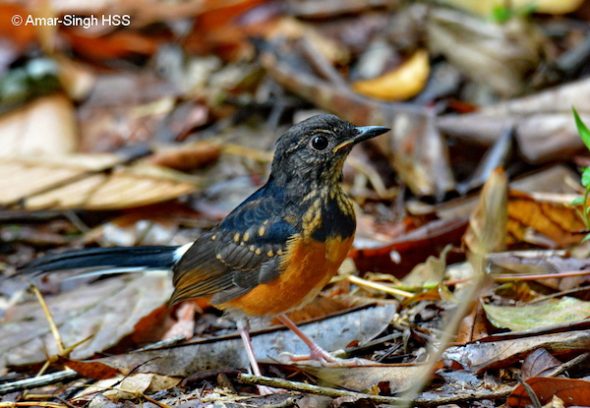 Met my second set of White-rumped Shama (Copsychus malabaricus mallopercnus) juveniles this week at different locations. This pair was accompanied by a single adult female. 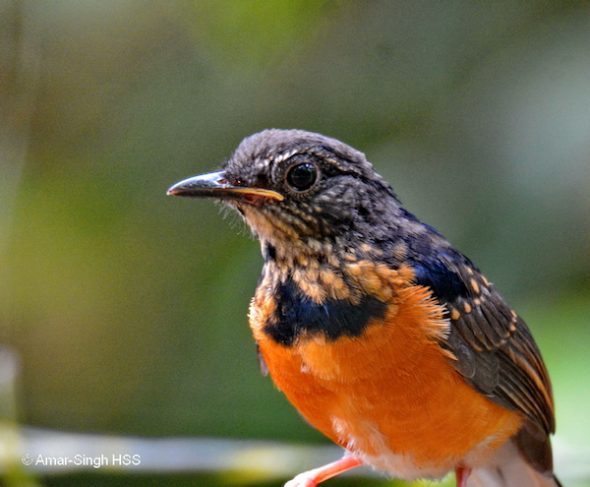 One of the juveniles was self-feeding and looked like a young male from the moult; the other was being fed by the adult female and was more immature in plumage. 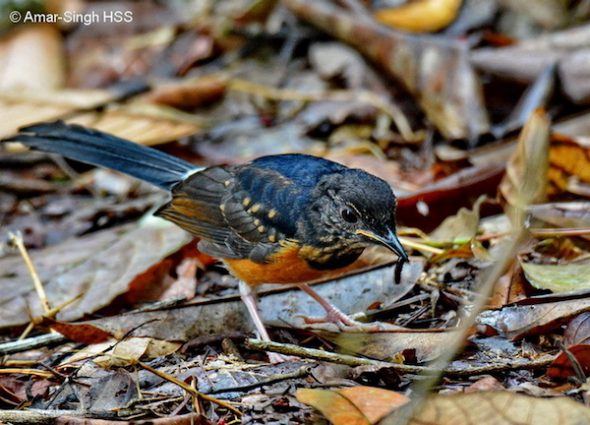 All images are of the presumed juvenile male. The above image shows the bird foraging in the dense leaf litter for worms and invertebrates. 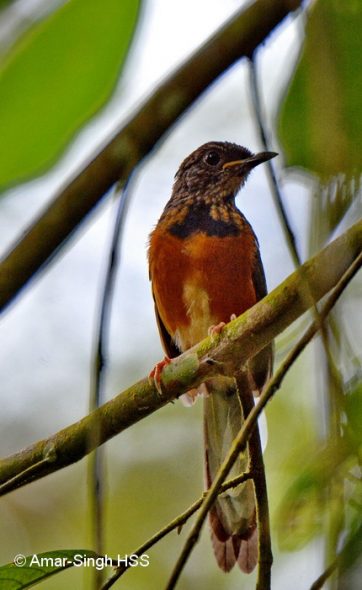 Watched a Chestnut-winged Cuckoo (Clamator coromandus) today and was first alerted to its presence by the classical metallic notes it makes; rendered by various sources differently but sounds like a beep, beep, beep to me. Chestnut-winged Cuckoos are said not to make calls while on migration (Wells 1999; Erritzøe, Mann, Brammer, Fuller, Cuckoos of the World 2012). Although this is general true, however there appear to be exceptions: 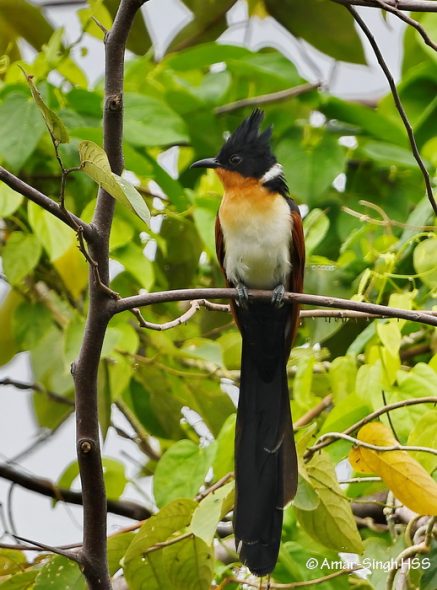 Today I heard these calls three times over 15-20 minutes. I believe I may have triggered an extension of the calls as I whistled an imitation of the calls. I also heard the guttural “critititit” calls twice but do not have a recording of them. 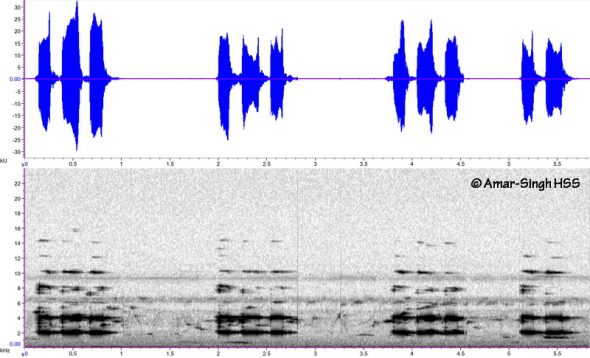 The classical metallic ‘beep, beep, beep’ calls made today were often as 3 notes (occasionally 2), given rapidly over 1 second. They were repeated 2-5 seconds apart and are of high frequency (16 kHz). A sonogram and waveform are shown above and a call recording is here: https://www.xeno-canto.org/617306 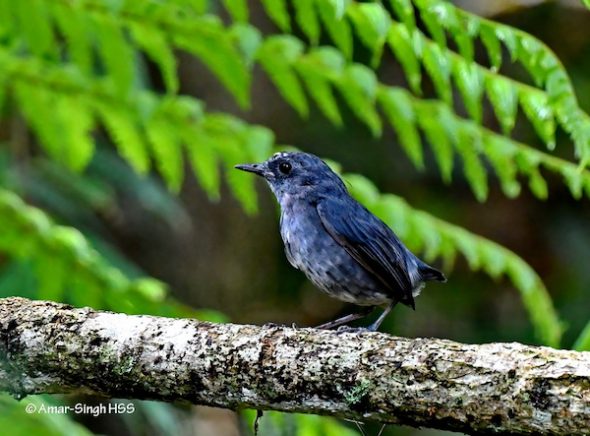 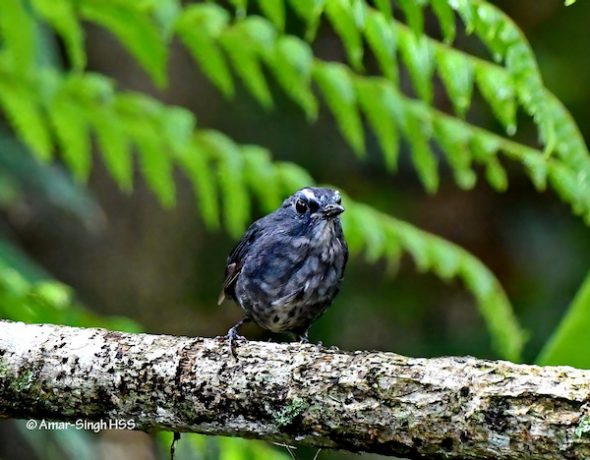 I waited quite some time and had a number of images but all were of limited quality due to lighting. 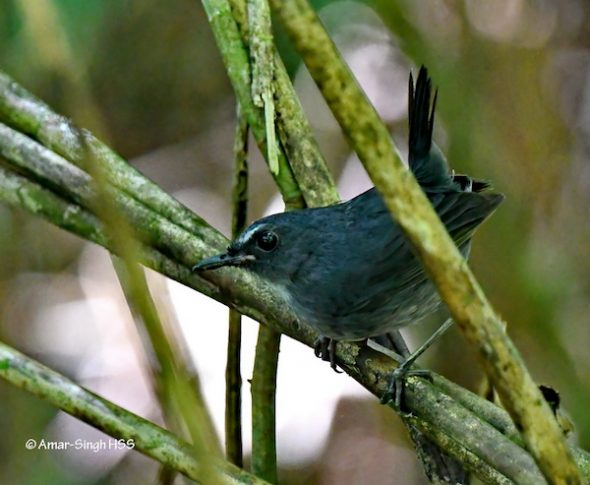 The bird can move very quietly in the undergrowth but has loud calls. The images of the first two males from the top seem to be in moult. 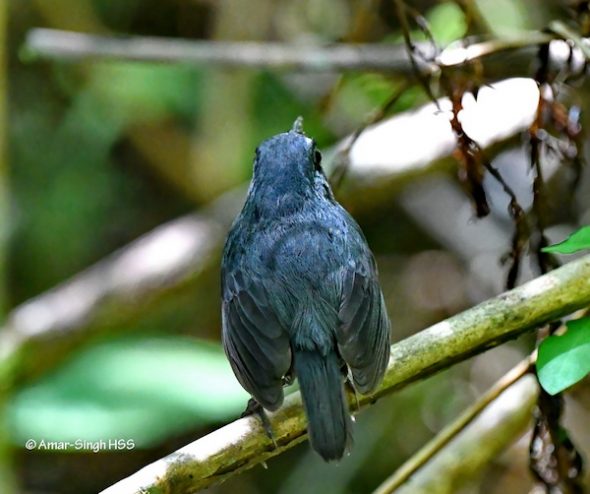 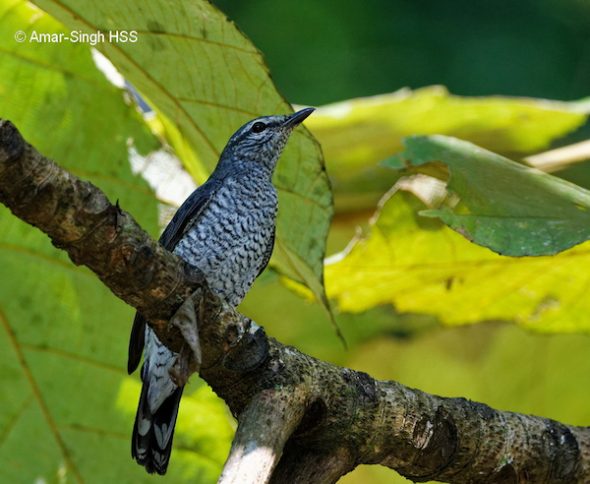 I saw a female Lesser Cuckooshrike (Lalage fimbriata culminate) feeding today on the Giant Mahang (Macaranga gigantea) fruit. I have observed this species feed on this fruit a number of times. I also saw it feeds on a Cicada-like insect. 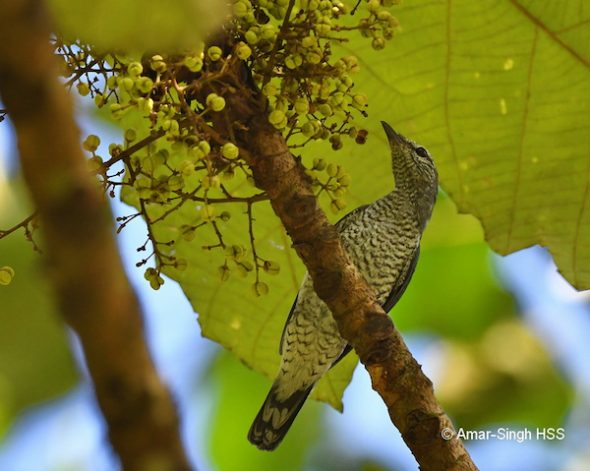 Wells (2007) says of my region that “No record of fruit-eating in this area”. Handbook of the Birds of the World Alive (2020) states “Food mainly insects, ….. and some fruit and seeds taken”. I also found a frugivory episode on Macaranga bancana fruit documented by Wong Chor Mun on August 2007 at Hutan Lipur Sungei Perdik, Ulu Langat, Selangor 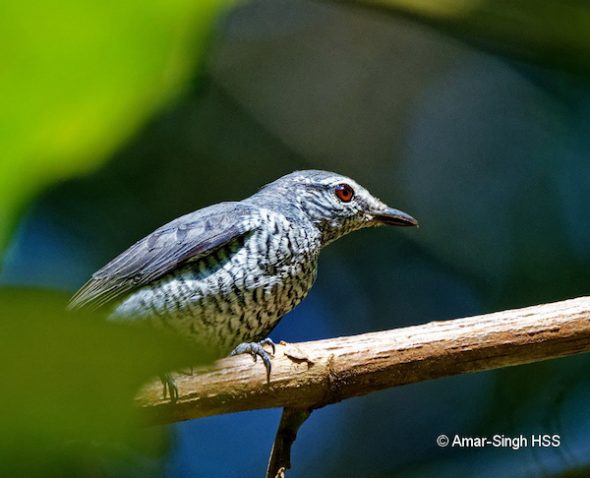 The above image shows the iris well – red-brown in adults. 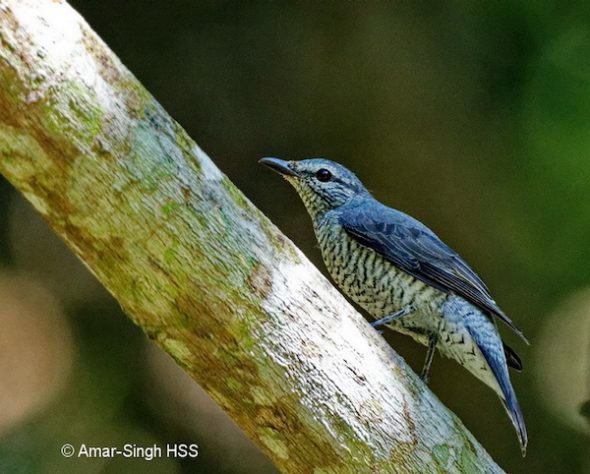 The Little Cormorant (Phalacrocorax niger) used to be uncommon migrant to Peninsular Malaysia.

A summary of some observations over time:

The “A Checklist of the birds of Malaysia Dec 2016(v2)” lists the Little Cormorant as a rare migrant to the peninsular. However those of us in Perak have seen growing numbers of resident birds throughout the year, often flocks of 20-30 resident birds. Chiu Sein Chiong posted a video earlier this year (February 2018) of 40-50 birds at Malim Nawar wetlands site. Yesterday I saw a minimum of 90 birds at the same site; possibly as high as 120 (some were airborne, other feeding, others at other locations – I only counted those that were feeding in the water at one site). The resident birds are supplemented by migrants and possibly birds born locally.

“Wells (2007) mentions that, for my region, the diet of this bird, Everett’s White-eye (Zosterops everetti tahanensis) is ‘hardly known’ but ‘behaves as a generalist’. I am taking the opportunity of watching them at the fruiting Common Macaranga (Macaranga bancana) to summarise some of my feeding observations over the years. This species has a large diet, with much still undocumented. 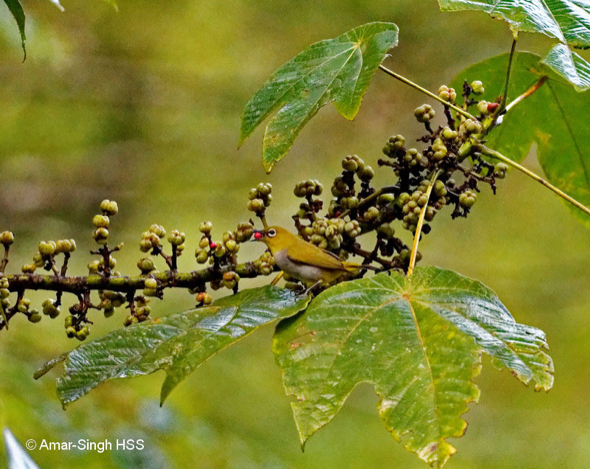 “Fruit Feeding
1. Large flocks (40-50) will visit fruiting Macaranga bancana to feed on the small fruit (swallowed whole).
2. I have seen them feed on the black seeds and orange stalks (arils) of the Acacia mangium trees (the birds take both the arils and seeds).
3. Giant Mahang (Macaranga gigantea)
4. Blue Mahang (Macaranga heynei)
5. Rough Trema (Trema tomentosa)
6. Orange berries in the highlands (not Ficus)
7. Ficus fruit
8. A number of other unidentified fruiting trees 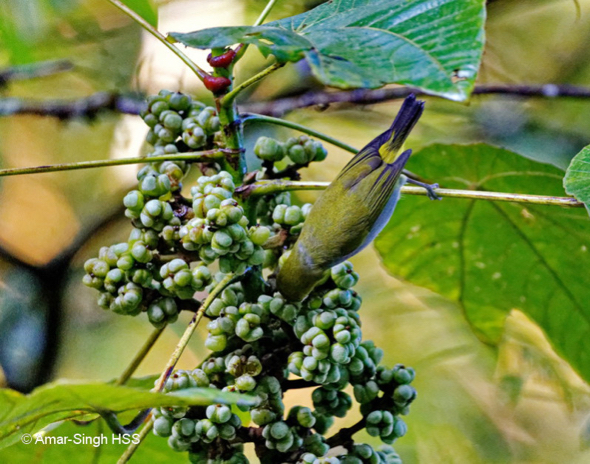 “Nectar
1. Bottlebrush trees (Callistemon)
2. Eucalyptus sp.
3. Feed on the flowers of Poikilospermum suaveolens to get to the nectar 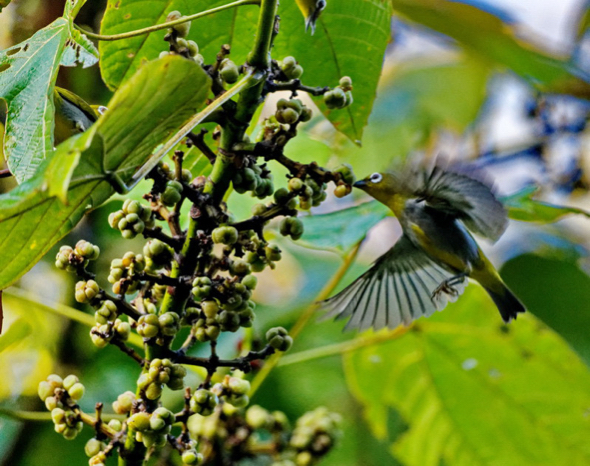 “Animal Prey
1. Caterpillars and small larvae
2. Unidentified winged insects
3. Feeding on ants (the ants were eaten and not used for ‘anting’)
4. Often seen foraging for insects and larvae
5. They are also a common participant of highlands mixed-foraging parties (bird waves) where they forage for insect prey.

“The 3 images above, show the birds feeding at the fruiting Macaranga bancana. The birds will go to great lengths to get the fruit with acrobatics and fluttering to reach less accessible fruit. They are also both intraspecific and interspecific competition for the fruit. 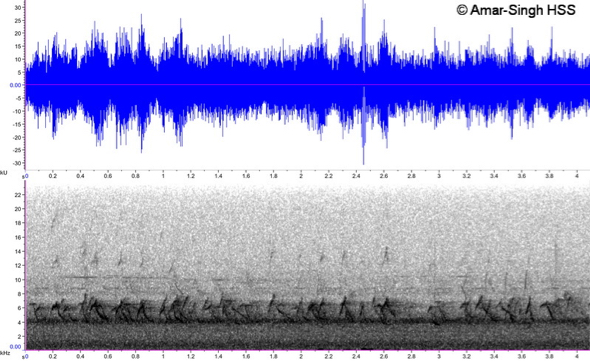 “The waveform and sonogram above show the calls made by the Everett’s White-eye (Z. e. tahanensis) at a fruiting Macaranga bancana. The call recording is HERE. As there is a flock of 40-50 actively feeding, they call out almost constantly, in large numbers. I am not able to edit out the rushing stream that is nearby. The sonogram (ignore basal stream noise) shows the sharp spikes/peaks of these contact calls.”