I was privileged to watch a social group of 4 Pin-striped Tit Babblers (Macronus (Mixornis) gularis gularis) displaying together. I have in the past occasionally seen this common babbler display individually – arches the back and points the beak skyward when calling out. On this occasion I saw a group of 4 birds do this continually for 7 minutes. The will rapidly move the body from a horizontal position to a vertical or arched backward posture, repeatedly, while calling out. There was no conflict between the group. Post 1 and 2 show 2 birds and Post 3 and 4 show individual birds. Wells (2007) notes that “Loud song occurs in a group context and groups are suspected to advertise communally”. 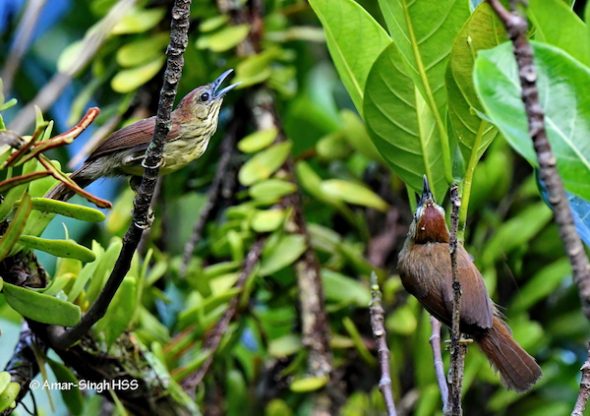 The call made during this activity were the common harsh “chrrrt-chrr” or “chrrrt-chrr-chrri” (Robson 2002), but with much variation. A call recording of this group here: https://www.xeno-canto.org/616394 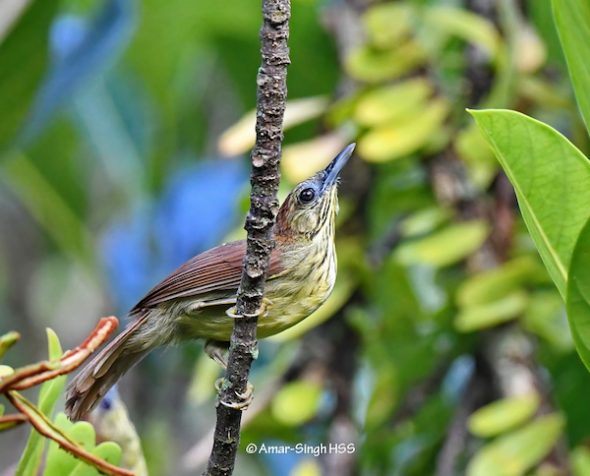 The activity is very fast and best seen by video. I was, as usual, handheld. I tried using a stick as a monopod and a very short clip of the ‘head-bobbing’ activity here: https://youtu.be/mpoIEP8EezM

Note also that one bird had a different coloured, lighter iris (Post 1 lower bird). Most of the Pin-striped Tit Babblers I encounter in my region have a dark red-brown iris. This bird has a lighter, pale yellow colour of the inner part of the iris. I considered some type of albinism but the plumage is normal. Species which occur in the north (Thailand and above) have lighter iris. I wonder if this bird is a M. g. connectens? 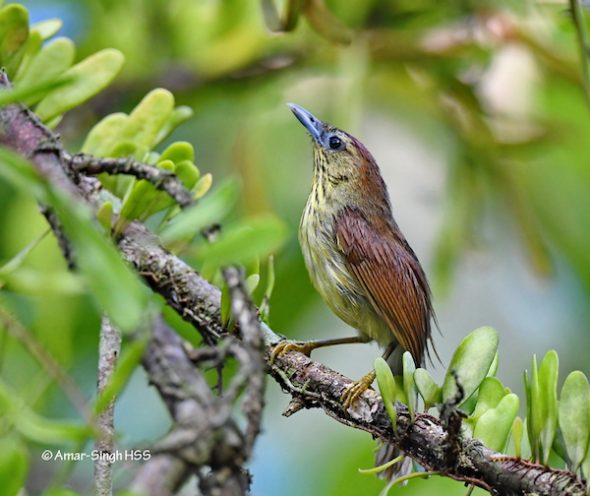 Assassin bugs are true bugs which specialise in ambushing their prey.  They use a specialised mouth part, called the rostrum, to pierce their prey, inject a mixture of saliva and enzymes to digest proteins and then suck up the digested mass.

The photograph above shows a nymph (Inara (?) sp. ) with the carcasses of its ant prey. After sucking the ant prey dry, the nymph  uses its last pair of legs to manipulate the ant exoskeleton onto its back.  Scientists theorise that the carcasses imbue the nymph with an odd appearance and thus protects the nymph from its predators.  Another advantage is that the ant carcasses may still exude chemicals which ants use to communicate with each other, thus allowing the nymph to approach similar ants.  This is termed chemical camouflage. The nymph can ambush more of such ants.

The nymphs have been observed to transfer existing ant carcasses to their new exoskeletons after each moult.

I observed two interesting behaviours by Black-thighed Falconets (Microhierax fringillarius). today in the city. This is a family of four birds, two of which behaved like younger (first year adult) birds. The first behaviour is seen in the image below. 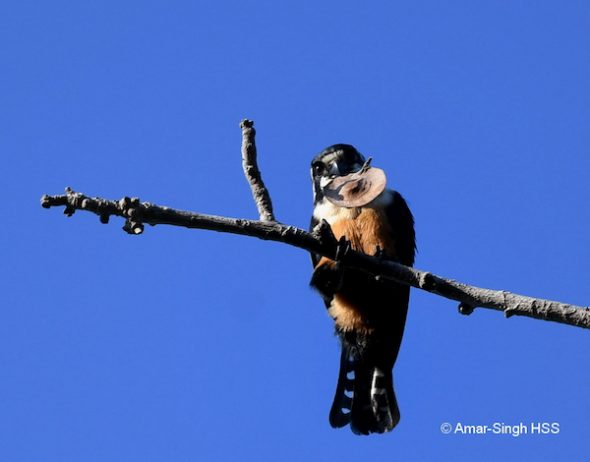 One of the birds plucked a dried winged seed/fruit from an Angsana tree (Pterocarpus indicus) and flew over to where two other Black-thighed Falconets were located. The item was not offered to the other and was then dropped without retrieving it; possibly because both my wife and I were observing the closely bird. This behaviour is not recorded in Ferguson-Lees & Christie (2001); they mention that the only material used to line nests are insect remains.

In trying to understand this behaviour I looked back at data I had previously read on leaf presentation as possible courtship behaviour in other falconet species. The dried winged seed from the Angsana tree is very much like a leaf. Allen, Holt & Hornbuckle (2002) discuss leaf presenting as a possible courtship behaviour when observing Pied Falconets (Microhierax Melanoleucos). Naoroji (‎1977) was the first to record such behaviour in Collared Falconet (Microhierax caerulescens). There are some lovely images of this behaviour by Pied Falconet (Microhierax melanoleucos) taken by Wang LiQiang (Crew 2018).

Since two of the five Microhierax species show this behaviour, it is reasonable to consider similar courtship behaviour for what we observed in the Black-thighed Falconet. Leaves offered are usually dried leaves. No one has been able to offer an explanation for this behaviour as the leaves are not usually used to line nests. Offering food items as part of the courtship ritual would have more expected. 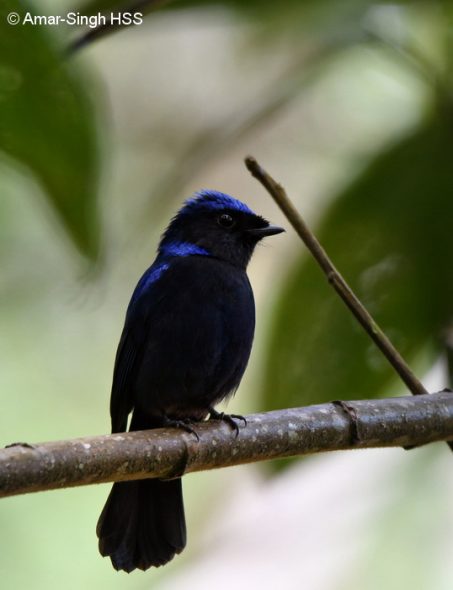 A pair of Large Niltava (Niltava grandis decipiens) was sighted along a primary jungle mountain trail. Male bird is shown above, female below. 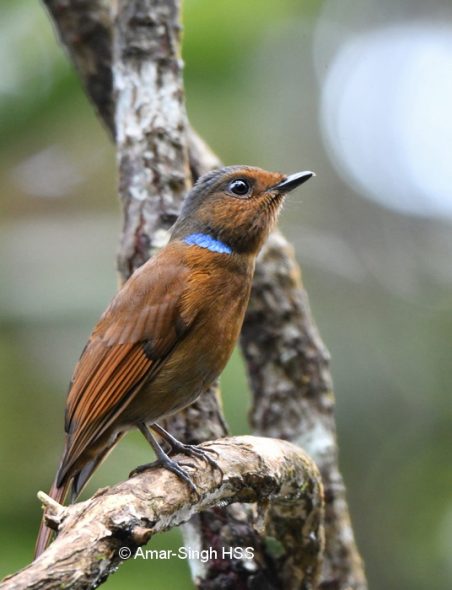 This pair of birds was seen together.

An upside down Malayan box turtle, Cuora amboinensis, was seen righting itself.  The video below by Francis Seow-Choen shows the turtle failed on the first attempt but got it right on the second.

Francis Seow-Choen’s video showing the upside down turtle right itself after two attempts.

These turtles inhabit freshwater bodies like streams, ponds and lakes. The animals are native to large parts of South-East Asia and the surrounding islands. They are often seen feeding on vegetation and fruits but will take invertebrates like earthworms and slugs too. The tell-tale yellow stripes on the head helps in the identification of this species.

They are often found in Chinese temples and devotees often release these turtles into the wild.  It is also often seeked out as medicinal food.

3. A guide to the Amphibians and Reptiles of Singapore by Kelvin KP Lim and Francis LK Lim ©1992

All photos are screengrabs from Francis Seow-Choen’s video. 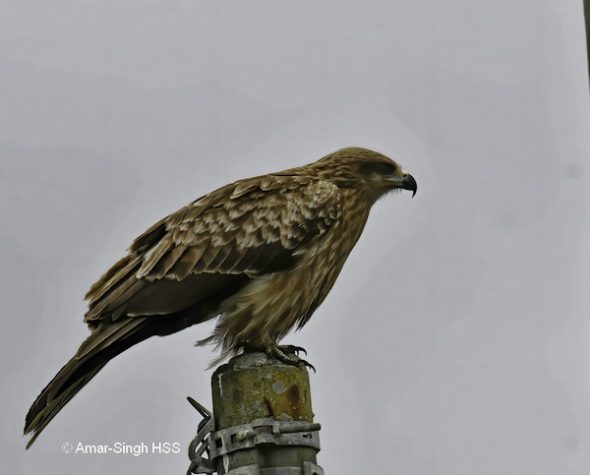 A single call of the Black-eared Kite (Milvus lineatus) was recorded see: https://www.xeno-canto.org/507829 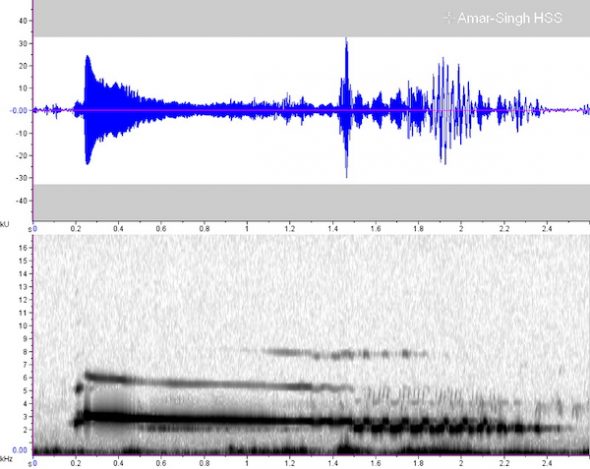 Sonogram and wave form as shown above. 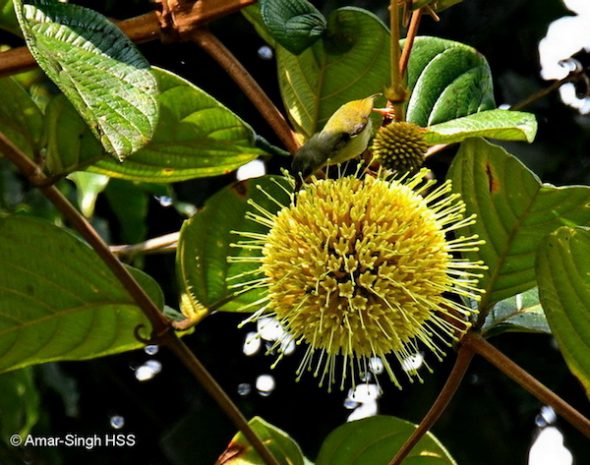 I saw this female Black-throated Sunbird (Aethopyga saturata wrayi) feeding on the nectar of a buttonbush. This flowering plant is in the family Rubiaceae but does not fit the local Nauclea orientalis (leaves, flower colours all not right). The much better fit would be Cephalanthus occidentalis but this is a native to eastern and southern North America. It is still possible, as we have many introduced plants in the country. Using “Gardner, Sidisunthorn, Chayamarit. 2018. Forest Trees of Southern Thailand, Volume 3” there a number of Rubiaceae plans in the Neonauclea genus that are also a possibility. However although appearing as part of a tree, it is actually a creeper (see hooks), often high in a foliage of a tree (have seen this plant a number of times).

There have been 4 sightings of the Eurasian wryneck (Jynx torquilla) recorded so far on eBird and 1 (that I am aware of) on Malayan Nature Society Perak Bird Group Facebook: 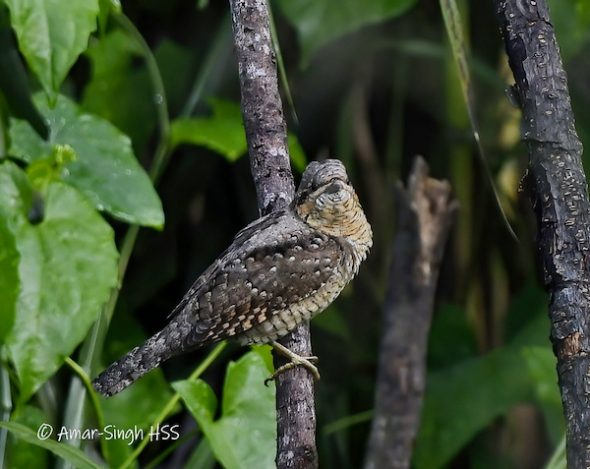 I saw a Eurasian Wryneck at the outskirts of Ipoh City, Perak today, 17th January 2022. I fortunately saw the bird, from a distance, before it saw me. It was close to the ground and I managed a few distant images (above, below). Once it spotted me it immediately ‘disappeared’. I attempted to relocate the bird but failed.

It may have arrived on migration yearly, perhaps a few birds each year (1-3) but easily missed, as the locations spotted may be less popular with bird watchers. Also, it had good plumage for camouflage and is often noted as foraging on or close to the ground. 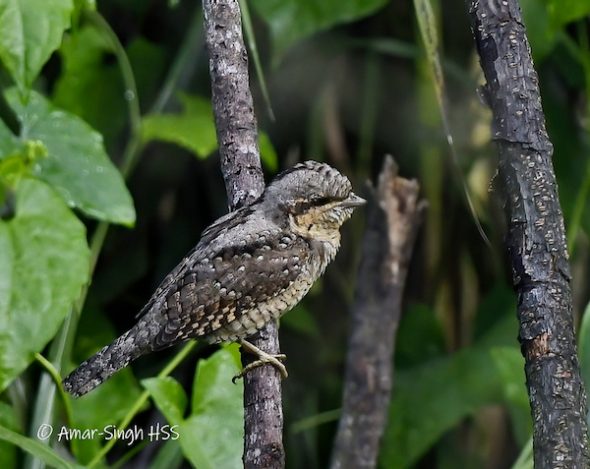 Mike HN Chong of Selangor, Malaysia had this to say: “Excellent find! This individual looks to me, not a full adult yet?

“Agree that it’s more a rare migrant than a vagrant in recent years, although the gaps in the years of sightings are pretty much uniform i.e. 2-3 years from 2012-2017? I am not sure if it’s a ‘common migrant’ though. Even the Chestnut-winged Cuckoo which is regularly sighted over recent years, I don’t think can be called a common migrant. It is more uncommon unless there’re many sighting all over to support this. Asian Brown Flycatcher to me is a common migrant.”

Agree that its cryptic plumage and very shy behaviour (as you attested) make it harder to spot. Moreover, the open/secondary belukar/parkland(?) area you may have seen it is not a prime birding or photographers’ location. So it may be missed due to this habitat preference by birders, etc.

Much like the Eurasian hoopoe (Upupa epops) which prefer open/parkland habitats, It also could be overlooked, like Eurasian wryneck. Of course with recent discovery hoopooe this could be a breeding resident again in Peninsula Malaysia!

I suspect the key habitat is ex-tin mining ‘wetlands’ where there is water, wetland vegetation as well as some dry sandy areas. After all…

So overall I suspect a wetlands habitat, especially ex-tin mining areas is the best bet.

This is in contrast to the native breeding habitat which is more wooded but while on migration may be more at ‘wet’ or ‘sandy’ areas.

Fulica atra, the Eurasian coot, are birds which belong to the Family Rallidae. The coots are conspicuous in their range, unlike their cousins (rails, crakes and moorhens) which are normally shy and secretive. The birds are frequently encountered around the coastal cities of Australia where there are ponds, lakes or wetlands. The sexes are similar in appearance though males are slightly larger than the females.  The slate-grey body, white beak and shield together with red eyes gather in large numbers on the water bodies.  They graze on land and dive for food in water. The diet comprises aquatic plants, algae, shoots, seeds, invertebrates, amphibians and fish. The digits are webbed at intervals, giving the digits the appearance of strings of beads. They are excellent swimmers.

Wong Kais observed a mother bird diving for aquatic plants to feed her two chicks which were disparate in size.  Eggs are incubated as they are laid and the chicks hatch asynchronously. The chicks are precocial, that is, they are quite matured at hatching and are able to run and swim. However, they still require the parents to feed them young, tender morsels.

All photos and video © Wong Kais.

The Raffles Banded Langur (Presbytis femoralis femoralis) is also known as the Raffles’ surili and the banded leaf monkey.  It is an Old World Monkey that is native to Singapore. The monkey measures approximately 60 cm from head to body and the long, non-prehensile tail measures up to 84 cm.  At last estimate about 60 of them live in the Central Catchment Nature Region.  They are seldom spotted or encountered.

These diurnal and arboreal creatures gather in groups of up to 6. The groups usually comprise a male and females and juveniles. The babies are usually white or grey, though orange ones have been sighted too.  The diet is made up of leaves, seeds and fruits and the occasional insects. As they prefer to inhabit dipterocarp forests, the creatures are critically endangered as a result of habitat loss and scarcity of food plants.

Dr Ow Boon Hin was blessed with the sighting of 2 individuals at the Lower Peirce Reservoir on 20 January 2022.

Video shows 2 monkeys feeding on the tree top.  The long tails are used as extra props to help them balance themselves. Towards the end of the video the monkey is seen with its tail twined lightly around the tree.