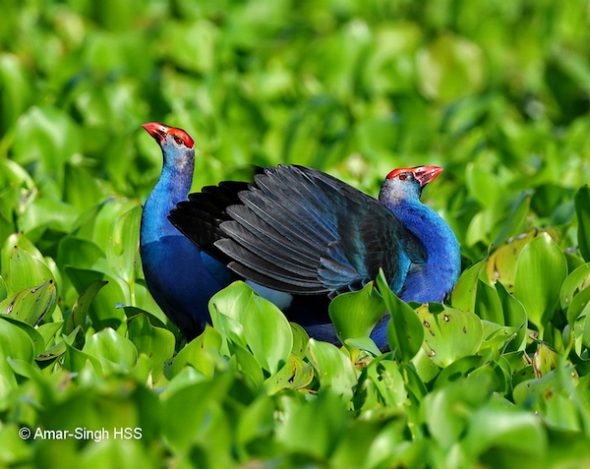 Intraspecific agonistic (conflict/combative) behaviour is common in Purple Swamphens (Porphyrio porphyrio viridis). Encyclopedia.com (2020) states “In the purple swamphen, the position of the tail and wings is important in agonistic display, while differing body postures indicate aggression or anxiety”. Wells (1999) states “Persistent pumping of the tail flirts the lower tail-coverts as a social signal”. 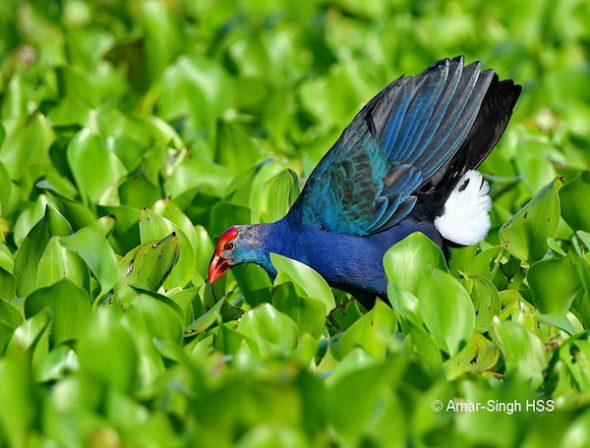 I have observed intraspecific agonistic behaviour previously on a number of occasions and reported it once (Amar 2010). I saw it extensively again yesterday. In trying to make sense of it, I would like to quote Craig (1977) who aptly says “The problem of subjective description further arises from fitting observed behaviours into previously named displays”. I have reached a better idea of what some of this behaviour means and hope to describe some here. John L. Craig has done extensive work on understanding the behaviour of the Purple Swamphens in New Zealand (Porphyrio porphyrio melanotus). While the subspecies is different, his work lends many insights into the species. I may not agree with all of his observations (and I am watching a different subspecies) but they are superbly described and illustrated; a must read. 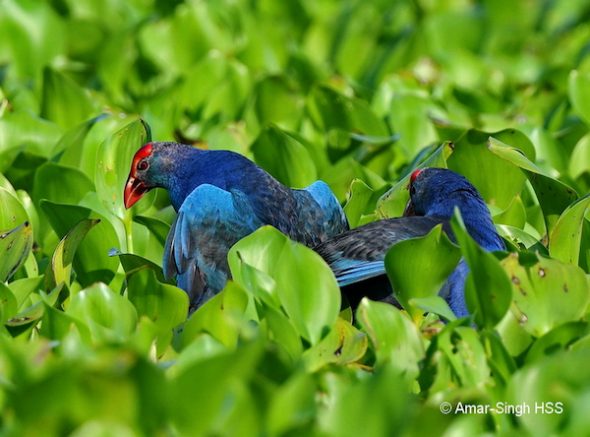 Purple Swamphens are known to have a variety of mating systems, ranging from monogamous mating to communal mating. Thai National Parks (2020) states “In the western parts of the range the pattern of social behaviour tends to be monogamy, but cooperative breeding groups are more common in the eastern parts of the range. These groups may consist of multiple females and males sharing a nest or a male female pair with helpers drawn from previous clutches.” Dakota (2009) notes that “Groups usually have a stable membership, but some groups which are formed early in the breeding season and which have too many males may change membership. The members of the groups arrange themselves into a dominance hierarchy using sex and age as factors to determine each other’s place. When juveniles grow up in a communal breeding setting, they will remain in their natal territories after maturity.” 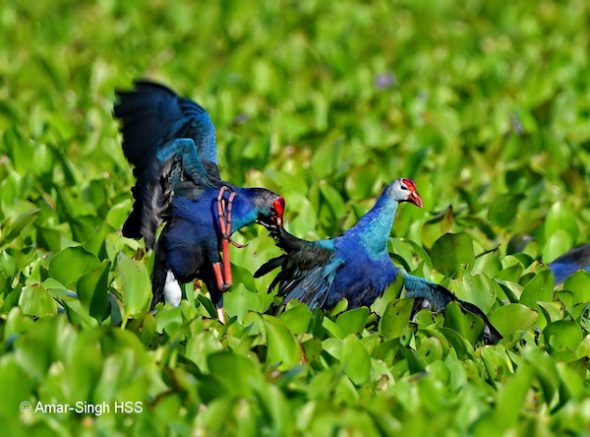 I watched intraspecific agonistic behaviour, with 7 birds involved, continually over 15 minutes. 2 of these birds were immature. The location where it happened has many, very large ex-mining pools serving as a wetland habitat. The one I was watching was 200 by 200 meters across, with extensive Water Hyacinth (Eichhornia crassipes) cover. I was sufficiently far away so that their behaviour could be observed undisturbed. The density and mobility of the Water Hyacinth raft meant that bird could sink lower into the vegetation and some behaviour was harder to observe. In the past I was unsure if this was courting behaviour, territorial breeding behaviour or territorial feeding behaviour (Amar 2010). My current opinion is that the behaviour I observed is related to breeding. I am of the opinion that this type of intraspecific agonistic behaviour is related to developing a hierarchical structure within a ‘group membership’. 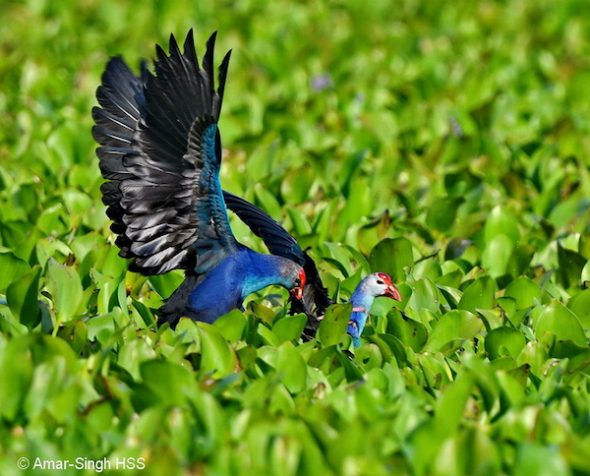 The behaviour began with a ‘call to arms’ – a long drawn out call by one adult and a ‘fly-in’ by that adult into a group of 4 other birds. Two other birds then flew in to join the altercation. The intraspecific agonistic behaviour is best described as a ‘melee’, a free-for-all tussle and fight. The behaviour observed (using some terminology by Craig 1977) included sparring with feet, pecking and pulling of feather with beaks (Post 4), birds jumping up (launching) with feet ready for clawing (Post 6), wings exaggerated up (Post 5), head down with wings up and white lower tail-coverts flirted posture (Post 2), wings expanded hunch display (Post 3), extensive circular chasing/pursuing. Occasionally some loud calls were made during the fight. 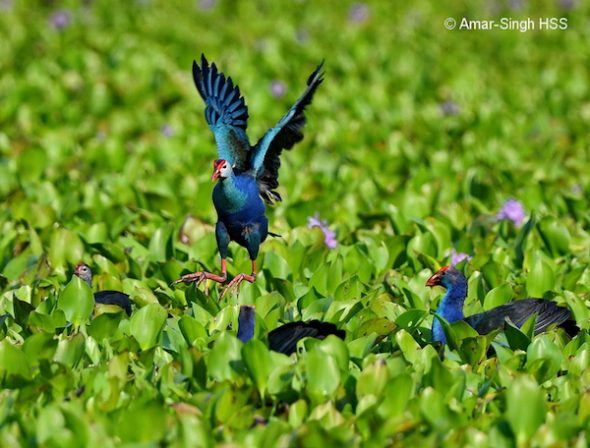 Once it was completed to their satisfaction, birds settled down together in the same location to preen but I noticed that two adults pulled aside and did a “head flick, wings exaggerated up, tail fully up” posture (Craig 1977) (Post 1). This spoke to me of courtship. These two birds then flew off together. 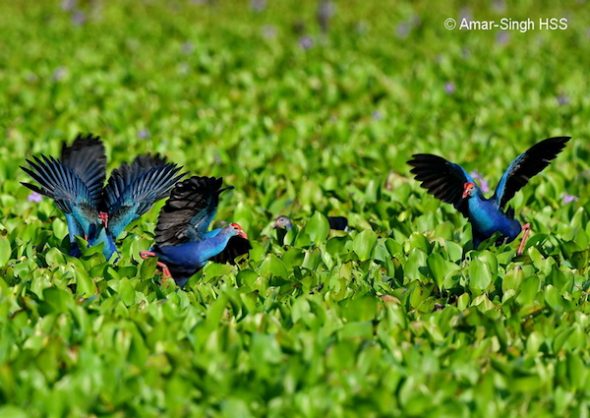 I said earlier that this conflict behaviour appeared to me to be related to breeding, the development of a hierarchical structure within a social group. The reasons I think so are: 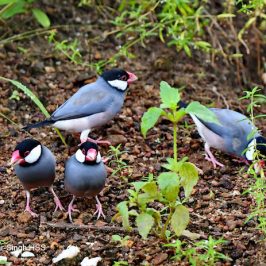 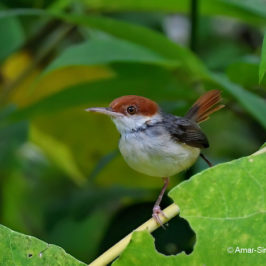 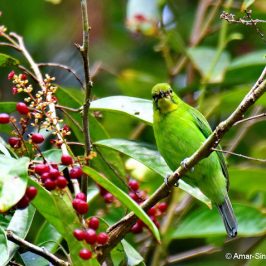 Post 1. Differentiating the female Lesser from the Greater Green Leafbirds is not always that... 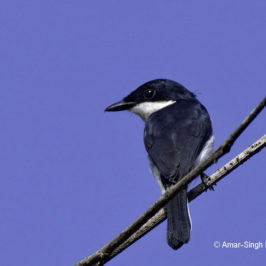 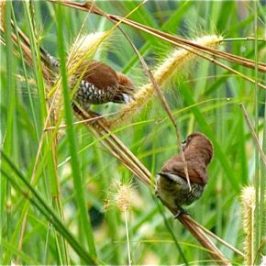 Lena Chow encountered a small flock of Scaly-breasted Munias (Lonchura punctulata) “having breakfast of their...