The Harlequin Red Bug Dindymus versicolor is a Hemipteran (true bug) in the Pyrrhocoridae family. It is also known as the cotton stainer bug and native to Tasmania and South-East Australia: South Australia, Victoria and New South Wales.

Two red triangles can be seen on the back when the wings are folded but colour variations can exist. The insects are up to 12 mm long. Wong Kais encountered them on his nature walk in Victoria, Australia. Many of them were seen crawling on a wayside railing.  He documented a mating pair: the larger insect on the right is the female. The larger female was the stronger of the two and kept pulling the male in the direction she was going. Thus, this bug is also known as the push me/pull me bug.  Another two of these bugs can be seen crawling in the background.

The males secrete a pheromone to attract youngs and females.  The females secrete another pheromone to signal that they are ready to mate.  Females copulate with multiple males each season and lay more than 100 eggs. Thus, the population explodes in spring and summer.

They are a significant pest in the agricultural sector, damaging fruit crops like cotton, pome (apples, pears), stone fruits (peaches, plums, cherries, apricots, mangoes, olives), figs, grapes, strawberries, tomatoes and vegetables in the Cruciferae family (cabbage, broccoli and rape). The bugs feed on the sugary saps of  host plants and cause the tender growing tips and flower buds to wilt. Young developing fruits are damaged and discoloured, causing great loss to farmers.

The bugs have hard exoskeletons which act as  shields on their backs. The bugs also release an obnoxious secretion when faced with danger, lending credence to its alternate name of stink bug. Observations on the ground point to the lack of natural predators which are able to control the population of these bugs.  Garden spiders have been noted to feed on the eggs of these bugs. Praying mantises feed on the nymphs.  Birds and toads have been noted to predate on them (how do they deal with the stink?!). 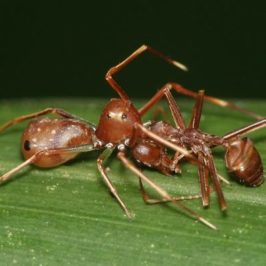 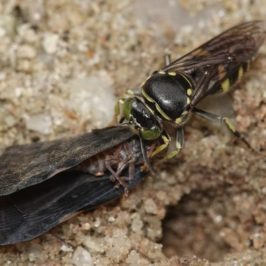 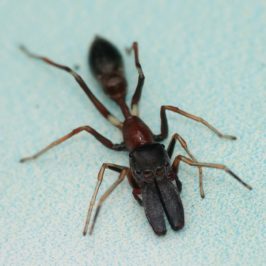 A Bicolor Ant-Mimicking Jumping Spider (Myrmarachne melanocephala) was spotted on a sign by the boardwalk... 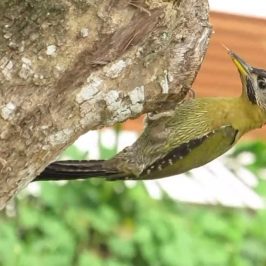 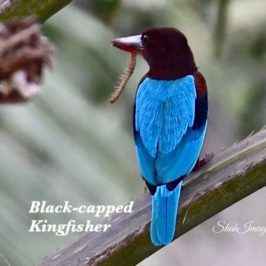 Centipedes are present in home gardens, and also in Oil Palm estate, Selangor state of... 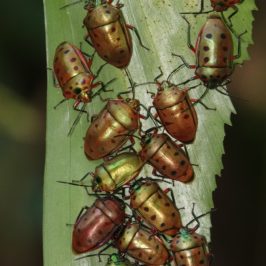