On 13th November 2021, at 2pm, Geik-Mooi spotted a Coppersmith Barbet (Psilopogon haemacephalus) at a nesting hole in Perak. The nest was located approximately 4 to 5 meters above the ground in the dead branch of a Rain Tree (Samanea saman). As is usual, the nesting hole was located on the ‘overhung side’ where the branch was leaning (see Wells 1999). As far as she was aware this was a new nesting site. She did a video of the nesting behaviour using a long zoom camera and observed some unusual behaviour (see video; a 2-minute unedited recording offered). 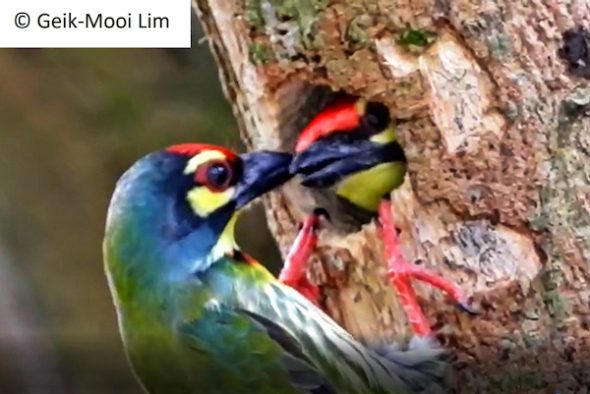 The adult at the nest entrance appeared to be ‘perplexed’ and distressed. It then became apparent that there was another adult Coppersmith Barbet in the cavity. However, the response of the bird on the outside to the bird inside was not like that of a breeding pair. The bird on the outside repeatedly appeared to ‘peck’ at the bird inside; the activity appeared to be aggressive. There was some responsive ‘pecking’ from the other bird. This can be best seen in the last 1/3 of the recording (see also the video screen grab of the activity).

Link to the video is here (Google Drive):
https://drive.google.com/file/d/15-MuWsZ9vKEly5-I93XsHXQDQFofd6eN/view?usp=sharing

Finally, the bird inside emerged and flew off. The bird on the outside then looked around before entering the nest. No calls were made by either bird during this altercation.

The next morning Geik-Mooi saw a bird exiting the nest with some nesting material in its beak (see second image below). However, a few days later, when she did a follow-up observation, there is no sign of any activity and the nest appeared abandoned. 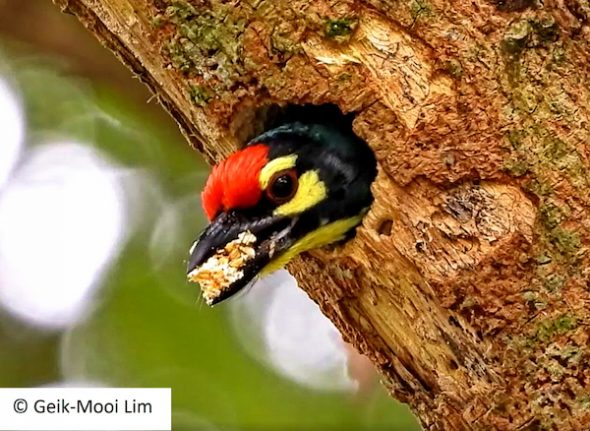 We discussed possible reasons for the behaviour observed and offer two possibilities.

The most likely reason for the behaviour is that another ‘rival’ barbet had come to check out this nesting cavity and was being ‘evicted’ by the original owner. There a number of reports in the literature that Coppersmith Barbets have to compete with other cavity nesting birds – usually having to defend against mynas, woodpeckers and other barbets (Birds of the World 2020). Hence it is reasonable to assume that this happens not just interspecific but also intraspecific.

The second possibility is some nest-building conflict behaviour between a nesting pair. Amar has observed this with other species, where the male appears to chase a female back to the nest. However, this is usually seen when young are already in the nest.

Why the nest was abandoned is uncertain. Perhaps this nesting bird felt threatened. Coppersmith Barbet are known to make more than one nesting hole as a means to protect from predators (Sarker, et al, 2012).

We welcome opinions from the experience of other bird watchers that might explain this behaviour. 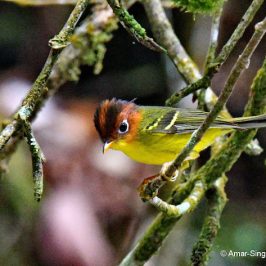 According to Wikipedia, the Yellow-breasted Warbler (Seicercus montis davisoni) is found in Malaysia, Indonesia and...