The spotted wood owl, Strix seloputo, is listed on the IUCN 3.1 list as a least concern species. However, the Singapore Red Data Book 2008 lists it as critically endangered in Singapore.  It is rarely seen and NParks estimated a population of 22 as of 21 August 2019. They are known to breed between January and June.  The fledglings appear around March to August.

These birds roost in tall trees.  They do not have ear tufts and the feathered legs and toes give the appearance that the birds are squatting on the branches. The buff-orangish facial disc and the broader white bars interspersed with narrow black bars on its underside catch the eyes of an observer. The birds are about 44 – 48 cm tall, and are conspicuous enough to the naked eyes, while they are roosting on the top of tall trees.

Spotted wood owls feed on mice, rats, small birds, insects and the occasional snakes and bats caught on the wings. They adopt a sit and wait hunting style. The predator glides down silently from the perch and use the talons to grip and pierce the prey to death. The predatory bird then ensures a swift, definitive death by biting the back of the skull of the prey.

At the moment, ornithologists believe that the velvety-piled feathers and peculiar comb-like arrangement of feathers along the leading edge of the outer wings explain the mechanism of silent flights in owls.

Spotted wood owls pair and mate for life.  Mutual preening, known as allopreening, has been observed frequently between a pair of these birds nesting at Pasir Ris Park, Singapore.  One bird preens the other on the head and the action is reciprocated. It is believed that allopreening ensures feather care in the head regions. The bird being preened would shut its eyes during the whole process. Either of the birds may also lean over. The parent birds had also been observed to preen the fledglings. The preening actions signal non-aggression and therefore also help strengthen the bonds.

The breeding pair at Pasir Ris Park attracted a lot of photographers. A bird’s-nest fern (Asplenium nidus) growing 5 m above ground on a rain-tree (Samanea saman) was selected as the nesting site. The nesting location presented plenty of good photographic opportunities: clear unblocked views from many different angles. As early as January 2022, photographers familiar with this breeding pair knew that a pair of owlets were in the nest fern. The first owlet, christened Bibi, fledged on 18 February 2022 and the second owlet, christened Baba, fledged on 21 February 2022.  The little birds brought out oohs and ahhs from the photographers and observers as they moved around precariously on the branches, big and small.  Each time the little ones flapped their wings while trapeze – walking the human observers gasped, hoping the little ones will be able to maintain their balance on the branches.  All the while, the parent birds watched vigilantly from higher branches or branches at about the same level.

Below is a gallery of photographs to enrapture the audience reading this article. an apartment building in Singapore. 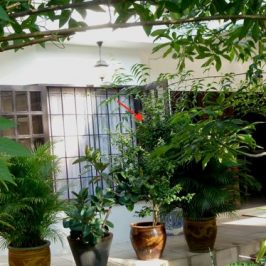 There is an active Yellow-vented Bulbul (Pycnonotus goiavier) nest less than a metre from my... 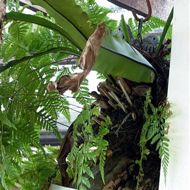