This is the second interesting behaviour we observed with Black-thighed Falconets (Microhierax fringillarius) today in the city. This is a family of four birds, two of which behaved like younger (first year adult) birds. Black-thighed Falconets are well known (and personally observed) to feed mainly on insects, especially dragonflies but also moths, butterflies, bees, beetles, etc. They are also known to hunt for and take small birds. I have personally seen them prey on Eurasian Tree Sparrows (Passer montanus malaccensis) but they have been known to take Munias, Sunbirds, Tailorbirds and Barn Swallows. They have also been recorded to take lizards and bats.

Today we observed the Black-thighed Falconets pursuing rather large bird prey. They attacked and chased Pink-necked Green Pigeons (Treron vernans griseicapilla) [3 episodes observed], Black-naped Oriole (Oriolus chinensis maculatus) [1 episode observed] and Spotted Dove (Stigmatopelia chinensis tigrina) [1 episode observed]. All these large birds were attacked while there were perched in trees and then pursued in the air. No kills were observed in the short time of our observation. The large birds appeared to be threatened and many flew away. 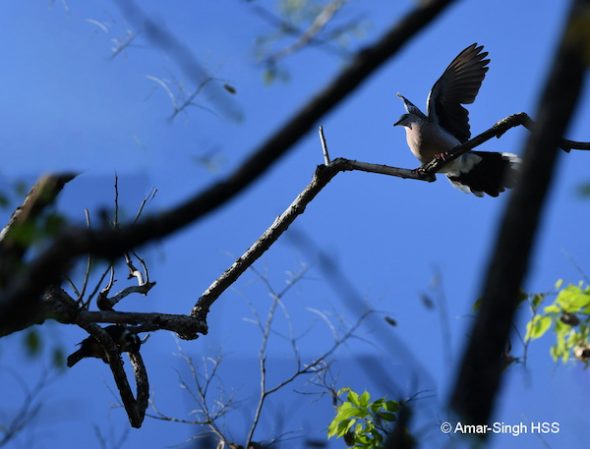 The above is composite showing a Spotted Dove responding defensively to a Black-thighed Falconet (this is composite of 2 images taken one after the other and merged in Photoshop); the bird was subsequently attacked and flew off. I had initially passed this off as ‘main-main’ activity (meaning ‘playful’ activity). But a report by Setiyono et al. (2014) reports a Black-thighed Falconet feeding on a Black-capped Babbler (Pellorneum capistratum); a prey that they report as being unusually large relative to the size of the Falconet. So I have revised my thinking to the possibility that these Black-thighed Falconets were really hunting these larger birds. 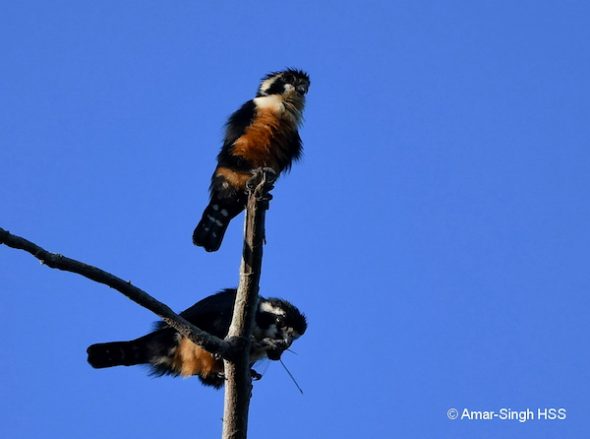 The image above shows two of the birds, one feeding on a dragonfly. 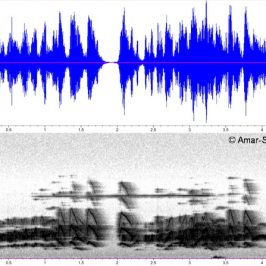