Disclosure: I spotted an adult with prey for young and then the nests. I watched initially from the car at 20 meters to allow them to get accustomed to me. I then moved closer at ~10-12 meters and used the car as a hide. They were initially wary of me (will describe below) but then quickly resumed feeding the young actively and showed no more distress. I stayed 30 minutes and left so to minimise disruption, but more as to limit any discovery by human passer-by’s. 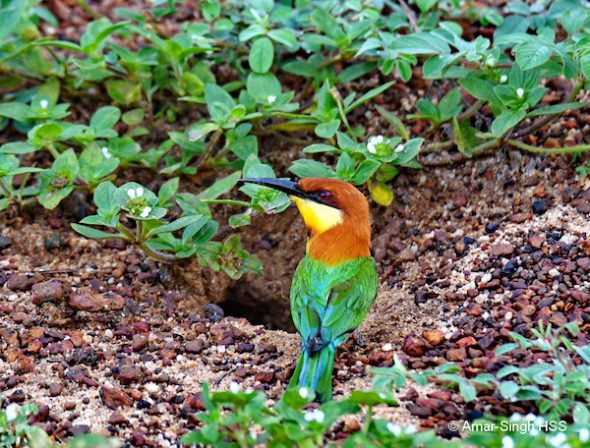 Parent at one nesting hole just after feeding young.

There were 3 nesting holes located at the edge of a tarred road at a semi-urban part of the city where there is limited traffic. Two holes were facing the road and one was hidden by a mould of dirt. Nests were ~ 50-70 cm apart. One nest had some vegetation that had grown to cover the hole partially. Nests were only 2-5 cm above the road ground. There was a very slight incline to the road suggesting that water will flow away, downwards and not into the nests. The majority of nests I have seen in the past are built into a slope but have I have observed nests built into flat ground like today, twice before. Wells 1999 says “burrows are excavated in flat ground or slight irregularities in flat ground”. Handbook of the Birds of the World Alive (2019) reports nest built both in flat ground as well as sandbanks, drain or road cuttings and cliffs. I have observed Chestnut-headed Bee-eaters nesting in this location twice before but not using the same site. 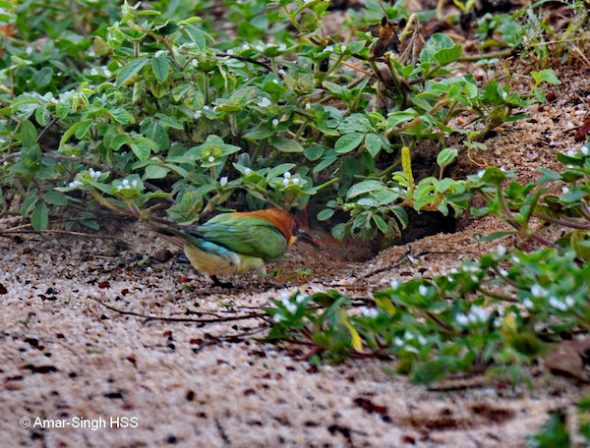 My observations of nesting holes in Perak suggest that nesting holes are often constructed around December to February but can extend later. This is the latest that I have seen one in use: Juvenile looking out from nest

I cannot be sure about helpers at nests (cooperative breeding) but the birds did cooperate in distracting me. The birds initially distracted me by one adult keeping prey in its beak and gong to the ground repeatedly about 15 meters away from the nest (‘sham’ feeding). While this was happening, the other adults continued feeding the young. This technique was abandoned once I repositioned myself nearer the nests. Birds usually arrived at the different nest singly, did a quick feeding and left, occasionally with a loud call as they were leaving. Occasionally calls were given as arriving at nest but my presence may have changed the dynamics. Infrequently I noted two birds arriving close to each other. Juveniles at one nest looked quite matured (will fledge soon) and were actively looking out of the next anticipating parents bringing food. Neighbouring dogs and cars passing by and other birds foraging near the hole were ignored by adults but juveniles were sensitive to them. 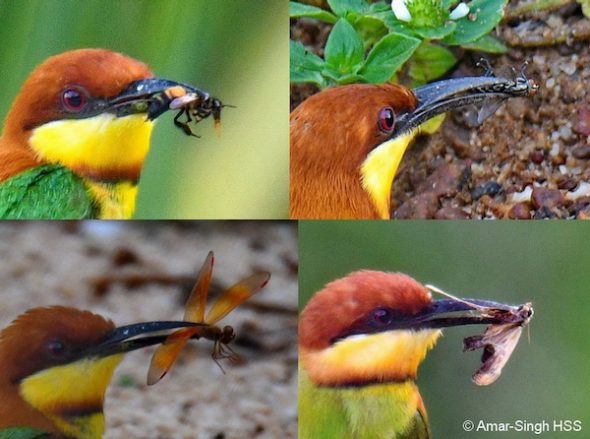 Some of the prey brought to juveniles.

Young were fed frequently, almost every 2-3 minutes. Prey I could identify included brown moths, a small butterfly, a house fly, wasps, and many dragonflies (I could be sure of Libellulidae family dragonflies, called skimmers – one with a red abdomen, another with brown wings). From my past nest observations, dragonflies are a common food source for juveniles.

An edited video of feeding episodes at two nest and the juvenile looking out here: https://youtu.be/roUKJNNsLrA 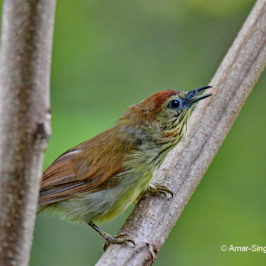 The commonest babbler to encounter locally is the Pin-striped Tit Babbler (Macronus gularis gularis). And I watched...