Video 1  Bathing in the rain

Video 2  Just after bathing in the rain.

The Dollarbird belongs to the Family Coraciidae (Rollers).This Family has two genera, Coracias (known as the “true rollers”) with eight species and Eurystomus (known as the “Broad-bill rollers”) with four species. They are called “Rollers” because one of their attack modes involves a high speed dive at its target. As it dives, it rotates its body and flail the wings to the left, then to the right, along the longitudinal axis of its body, through perhaps 270o, several times per second, while keeping the head steady. The ground target not only sees this furiously rotating bird-ball hurtling towards him but hears the bird-ball screaming and shrieking at the top of its raucous voice, missing him by a hair’s breath. This makes for a very frightening experience. The Roller bird then levels off and begins climbing to a high attitude to repeat the unique “Rolling” attack again. It does this several times. This aggressive act is thought to be for laying claims to its territory and protection of its nest.

Sadly, our Dollarbird has not been known to do the “Rolling” maneuver.  Birds of the genus Coracias, are known as the “true rollers”, since they perform the “rolling” maneuver.

From afar, the Dollarbird looks like a black colored bird with a white patch on its wing, similar in size and looks to the local Javan myna. The differences are the Dollarbird’s stocky body-build, disproportionally big head, shorter legs and its outstanding broad and bright reddish-orange beak. (See photos 1 and 2). Javan myna has narrow and yellow beak with longer legs and a more slender build.

Rollers are gorgeous, brightly colored birds. In good lighting, the black colored Dollarbird, 30cm in length, is transformed into a glossy blue-green bird with varying hues. The head and neck is blackish. It has dark brown eyes with orangey-red eyelid rims (not seen in our photos). The front of its throat displays a large patch of iridescent ultramarine blue with brilliant cobalt-blue needle-like streaks radiating downwards. Below the neck, it is a whole sea of iridescent light turquoise green covering the chest, down to the belly. The primary flight feathers are dark blue/black with a pale blue patch (the “dollar” sign), conspicuous on both surfaces. Covert feathers are greenish in color. In some photos the covert feathers are blue in color. The square tail is greenish-blue/black. Sexes are alike. There is no breeding plumage. Juvenile has similar colored plumage but is duller in tone. Their upper mandible is also blackish instead of orange in color. Feet are yellowish orange.

Its beak and legs are bright orange-scarlet. Like predatory birds, its upper mandible terminates in a sharp hook, thin and black. Its legs are considered weak because it only uses them for perching on a high tree branch. It seldom hops along the branches or walks on the ground.  It is an aerial forager.

Its wing span is much wider than the other rollers (perch and wait predators) of the Coracias family. It usually sits bolt upright on a high exposed branch, scanning for flying insects over the open ground. Once detected, it sallies forth into the open air to catch the insect in flight. Its powerful pursuit and acrobatic aerial maneuvering in snapping up large flying insect, is a sight to behold. Its broad bill makes it easier to scoop up insects while flying. The short and deep bill makes it a powerful tool to crush the hard exoskeleton of insects like beetles. After crushing the insects, it swallows them whole (legs, wings, and exoskeleton).

The hard, chitinous exoskeletons of insects are ground up in the gizzard with the help of small stones, which it has previously swallowed. The remaining chitinous waste is not passed out through the cloaca but instead thrown out through the mouth (regurgitated) as pellets. In one study, it was observed that a roller can throw up to a dozen pellets a day. Each pellet measures 10-15mm wide and twice as long. It is estimated to represent the remains of 15-24 insects. Another study shows that when a roller found a swarming hatch of flying ants or termites, usually in the evenings, it will gorge itself. It can catch and swallow an insect every 6 to 10 seconds. After two hours of feeding frenzy, before night falls, it was found that the stomach of one roller contained 748 insects, 40% of its body weight.

Its favorite habitat is the edge of forest or open clearing with some tall trees.

Bathing in the rain seems to be a favorite activity of the Dollarbird and other rollers. 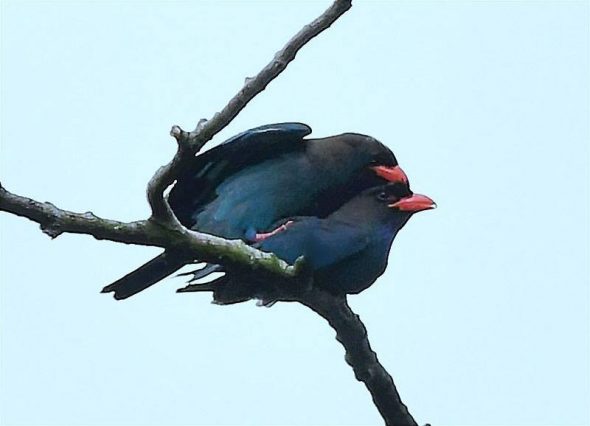 Courtship behavior usually involves a pair of rollers sitting close together on a branch. Allopreening, chattering and food provisioning  are often done before mating. Die, die must mate. Click Accident of mating.

Vocalisations of the Dollarbirds are usually limited in repertoire and considered to be low pitch, hoarse, and rasping in nature, like a “skatch-skatch”. When in attack mode, a louder, more rapid four syllables expletive may be used, “kej-kej-kej-kej”. In announcing its territory, a loud, repetitive sound is employed, “jek-jek-jek…..jek-jek”. When talking to its mate, while perching on a branch, it usually uses a soft mono-syllable, “tchek” or “tcherk” maybe a short “yes” and “no”. However, on the occasion the male makes a half second burst of non-vocal stridulating sound, coinciding with rapid bill-chattering, it may be anticipating an approaching joyful event. I know, all these sounds boring, but luckily our pioneer contributors from BESGroup have painstakingly recorded their actual calls here. Enjoy.

Nest is usually a hole high up in a tall tree. Dollarbirds do not excavate their own nest holes, hence they use the previous (sometimes new) nesting holes of woodpeckers, barbets, parrots, kookaburras, etc. Nests are mostly not furnished, usually lined with a pad of dried leaves on the bottom. Two to four white eggs are laid over a few days. Both parents take turns to incubate the eggs but only the female incubates at night. Eggs will hatch in 17-20 days. Chicks are born blind. By about 7 days, their eyes are open. At two weeks of age, they look like hedge-hogs because their naked skins have developed many long grey spines of unopened feather sheaths. Nestlings take about 25-30 days to fledge. The first nestling to leave the nest is taken care of by one parent while the other takes care of those remaining in the nest. After a few more days, all chicks will have left the nest. The nestling’s first five days after leaving nest is still heavily dependent on parent for food. After that they begin to look for their own food. Three weeks after fledging they are fully independent. They stay around their parents in a loose association for another three weeks before starting to wander off.

Looking for nesting holes and defending the nests are the main reasons Dollarbirds come into conflict with a other birds:

In Singapore only one roller bird species is found, the Dollarbird. There is a local resident population. There are two migrations in the equatorial region. The Northern migrants from Russian, China and Japan fly as far south as the Malayan peninsula from October to March. There are also Southern migrants from Australia, flying north from April to August, mostly to New Guinea.

Sulawesi, Indonesia has its own Purple-winged Roller, Coracias temminckii.

Azure Roller, Eurystomus azureus is only found in North Moluccas, islands to the east of Sulawesi. Status is Vulnerable. They are now rarely seen.

A note of Thanks to all the pioneer contributors to BESGroup website whose beautiful posts have made this article possible. 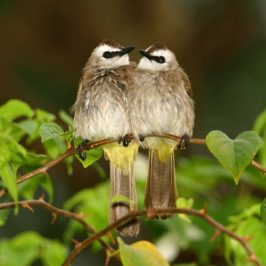 Isla Sharp wrote: “I am travelling in Malaysia… At Ruth Kiew’s Bukit Awansari apartment outside... 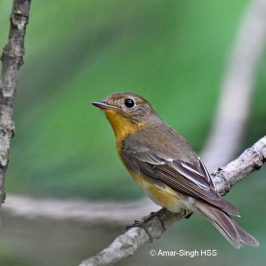 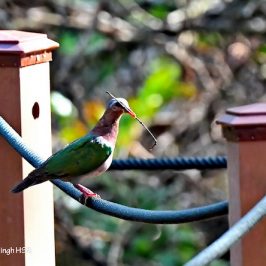 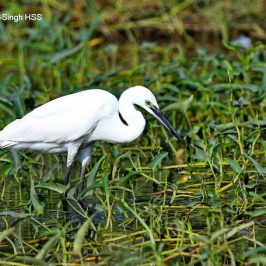 The Little Egret (Egretta garzetta garzetta) is diverse in its foraging techniques for catching aquatic...