Common Fruit Bats (Cynopterus brachyotis) are usually found during the day roosting in caves, on the under-surface of flyovers, under the eaves of houses, on branches of trees, etc. With the coming of dusk they fly off in search of food. Most of the time they bring their food to eat while hanging down from their roost. They thus dirty the ground below with their droppings and food remnants. And if you want to photograph bats, you need to visit their roosting sites or their feeding areas after dusk. 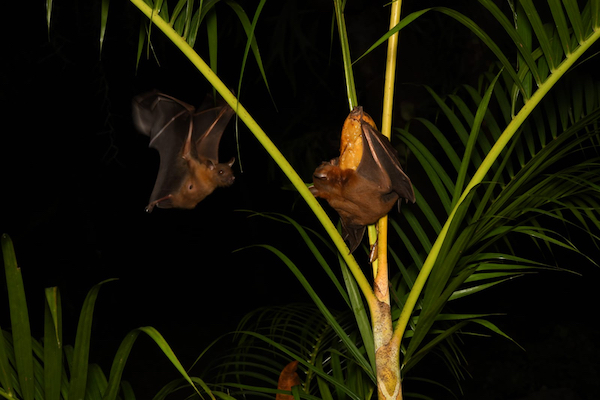 Dr. Francis Seow-Choen had a different idea. He managed to lure bats to his garden so that he could photograph them in comfort. This he did in May 2020. He stuck a partially peeled banana at a leaf base of a young palm. He kept vigil after dusk with his camera at the ready. At around 7pm, not one but two bats flew in to get at the banana. Unable to bring the banana back to their roost, the two bats flew around, taking turns to cling onto the banana to take bites. The bats left only when the banana was totally eaten.

Common Fruit Bats roosting under the roof of a porch HERE and taking nectar from banana flowers HERE. 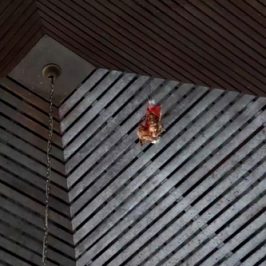 It has been more than a year since I hung a bag of red chillies...