“A window period of 36 days (15th April-20th May) inclusive in 2019 were had, to monitor breeding cycle pair of Common Tailorbirds (Orthotomus sutorius), from the comforts of my home. 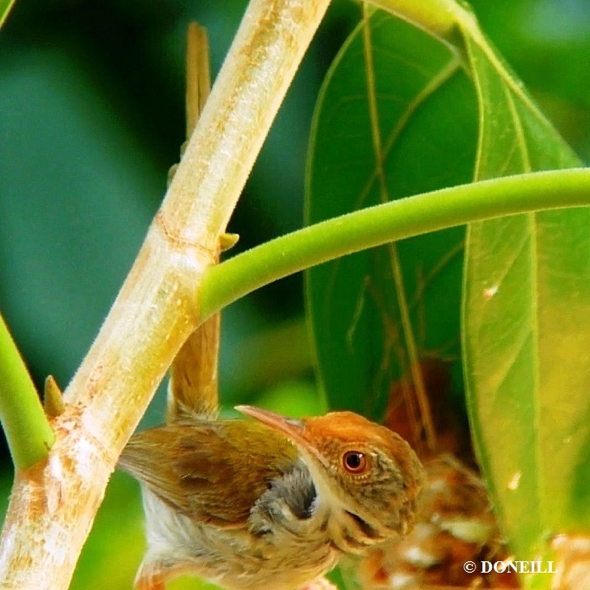 “They were ‘registered’ under the name of Otto (male) and Satori (female) (above, below). “A potted plant of sapling Ficus benghalensis was their choice site they built their nest in. It also became confinement home and nursery to three chicks. Eventually, a matured tree of similar species nearby became a second crèche for a couple of days more, before juveniles took to their freedom.

“An impressive nest uniquely stitched up, with many varieties of materials brought and countless trips made were much admired; the riveting skills the female possessed, deservingly earned its name ‘Tailorbird’ (below).

“My observations confirmed female bird played dominant and exclusive roles not only in nest riveting; she also slept with hatchings and attended to feeds during delicate and early stages of hatchings’ growth.

“As hatchings grew each day and after, both parents worked tirelessly from dawn to dusk, collecting suitable foods to feed their brood.

“While sex differentiation was a noteworthy mention, breeding male was endowed with extra-long tail. However, distinguishing the difference between female and male during non-breeding season may not be so easy. “Twelve varieties of foods, ranging from egg-larvae to insects were accounted for in photography (above, below). 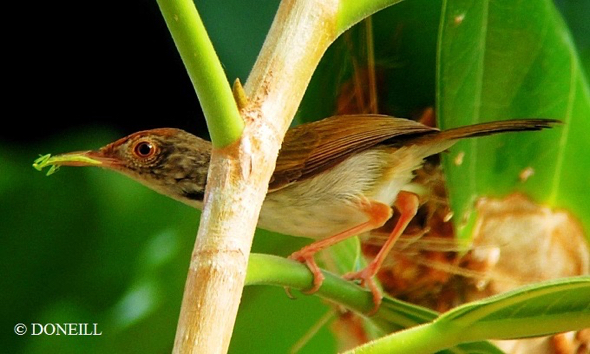 “The mysterious item of stink bug’s eggs (Scelionid parasitoids) – a new food record was offered to the advantage of the oldest chick (below). 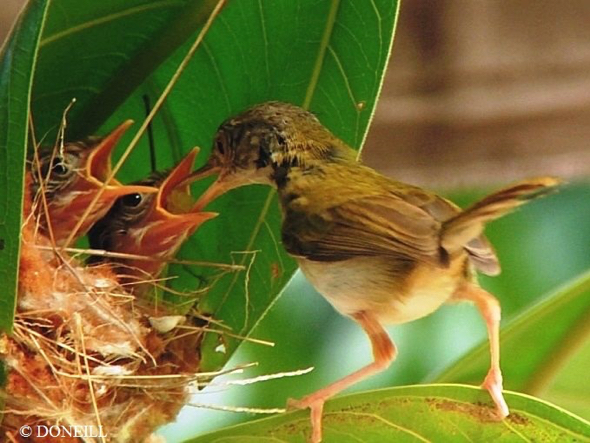 “An average of five hours per day of observation, total (65 hours) over a period of 13 days (7May-19May) inclusive were recorded.

“It chalked up a total of no less than 172 documented sorties of variable species of spiders, caterpillars, ants, grasshoppers, beetle, fly, mantis, moths, butterflies, eggs and larvae and seven more that could not be identified.

“Wasps and bees topped the list with 77 sorties combined (below). “One can only imagine, if an estimated calculation is made to include some items missed, what I had observed and documented were a mere 40% approx… of total feeds, required to nurture and fledge a clutch of three chicks.

“Otto and Satori had sent me on an educational journey into their world of the Hymenopteran order and beyond for which, I knew so little and found exceedingly interesting.

“My eyes balls were glued for hours onto endless pictures of Bees and Wasps trying to differentiate them apart. While eyes of triangular faced Mantis were deceivably deadly, enlarged views of huge, compound eyes of insect-Fly came to fascination and near hypnotism. As to looking into Spiders’ simple eyes, I was still thinking which one works…….

“Avenues of plant species interacted by parenting birds and their fledglings were also explored; the existence of their living and breeding habitat in my surroundings, appreciatively enhanced.

“Excellent housekeeping duties of parenting birds had kept nest clean and odourless to avoid rodents and successfully deterred predators (below). 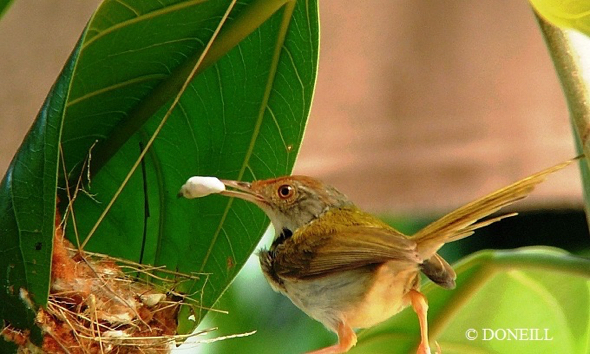 “Prowling feral felines and a civet cat (Paradoxurus hermaphroditus) of the night were spotted, came close… but walked past nest unaware.

“The many facets in the life of Common Tailorbirds coalescing with its habitat and surroundings have lots, yet to be explored.

“In venturing into your own nestling observation, I wish each and every observer, many moments of joy and satisfaction; knowing that those observations were all carried out with utmost care, given priority to the welfare of birds, whilst embracing the Code of Bird Ethical Practice – in bird watching and photography.

“I have two personal rules I keep in mind:

a) I do not post out photographs of nesting sites, nestlings in situ, chick parental feeding during ACTIVE stages of observation.

b) I do not entertain requests for images of nestlings’ feeding nor set such kinds of pictures into photo frames to become favourite collectors’ items.

“If I had any photo frames of such in the past, before I came to understand the life of birds, I would by now have them donated to private maternity homes (labour rooms) and nurseries, where they befit respectfully similar scenarios in procreation.

“The prowess of photographing nestlings and Homo sapiens hell bent to get that perfect shot of chick feeding, at latter’s expense is not one to be proud to show off; and irresponsibly be advocated to fellow or new bird- photographers.

“What I have shared in this 13 part episodes and its pictures is just a tip of the ice berg, an insight- in getting to know well these small, ubiquitous birds of the tropics … that came right onto my door step, to respect and to appreciate.

“I hope readers have enjoyed them too, as much as I had enjoyed writing this 13-part episodes for the Bird Ecology Study Group.”

Postscript by YC Wee
The Bird Study Ecology Group is indeed grateful and honoured to have the priviledge of posting the detailed study of the nesting behaviour of the Common Tailorbird that Daisy O’Neill observed from the comfort of her home in Penang, Malaysia. For this we thank her.

This series brings to mind the 16-part posts on the nesting behaviour of a pair of Zebra Doves (Geopelia striata) observed from a roadside tree fronting my house. As the nesting developed from the hatching of the first egg to the fledging of the chicks and beyond, the posts provided an illustrated series of accounts LINK to LINK.

This was in 2005, a time when nature blogging was at its infancy. The BESG site had just been started and local birdwatchers were still mostly hardcore twitchers LINK.

However, the accounts and images were not as detailed as those provided by Daisy in her series on the Common Tailorbird. But then it was a novelty then to read accounts of nesting behaviour rather than lists after lists of birds seen.

During those early periods of BESG existence, Daisy O’Neill was one of our early contributors – as seen in this selection LINK 1; LINK 2; LINK 3; LINK 4… and the list goes on until today. 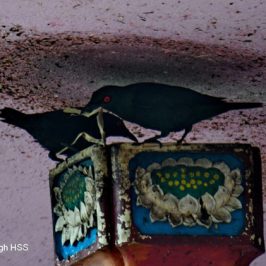