“At 09h53, 19May Osai3 – youngest chick of parenting pair-Otto (male) and Satori (female) – Common Tailorbird (Orthotomus sutorius) fledged. It took to a perch on stalk foliage of Ficus sapling species, which sprouted from pot in balcony (below). 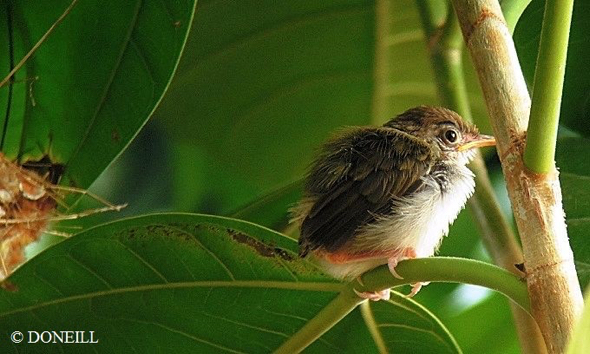 “Subsequently, tailless and without rufous forecrown to show, Osai3 (youngest chick) began calling softly, preening and shimmering its first feathers. This was followed by discharge of first, white blob of poo at 09h58 (below).

“What quite impressed me was, Satori – female parent wasted no time to execute a responsible act of discarding remaining faecal sac in the nest.

“An act perhaps to compare with unsavoury Homo sapiens (tenants) put to shame, those who vacated premises in state of eye sore (below). 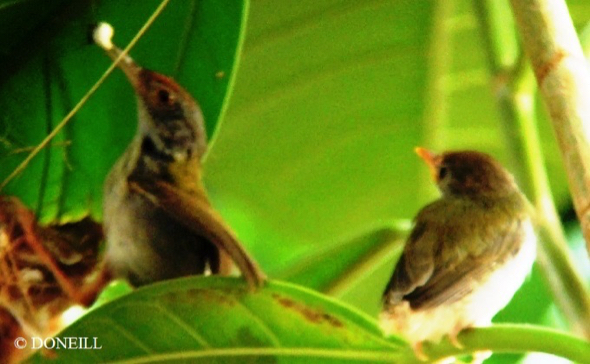 “Inspection of nest showed it to be nicely cleaned out, unadulterated from the day weaved by female specialist Tailorbird – Satori (below). “Readers will notice too, piece of straw weaved across entrance of nest remained intact, but somewhat disturbed after last chick fledged (below). 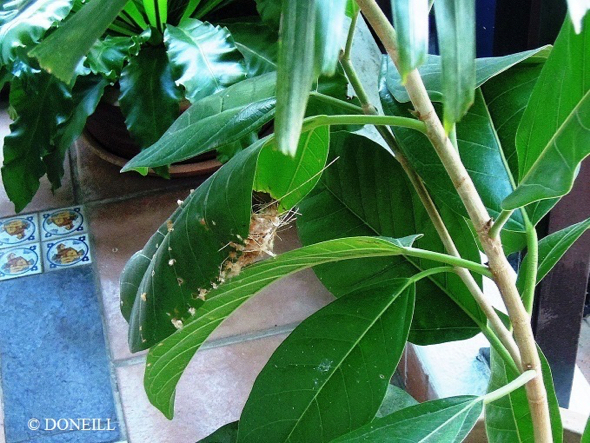 “At 10h51, Satori was spotted on balcony railing. She was at hand to coax and escort Osai3 to follow suit. Fledgling followed but landed on hanging drape (used to shield glare from morning sun), suspended from a washing line, behind the nest.

“Sharp claws of fledgling served well to cling on and left Osai3 dangling from drape in frightful despair (below).

“Having recovered from such new experience, Osai3 successfully joined two other siblings. Assembling point was well hidden amongst the Areca palm (Dypsis lutescens) – same used by Otto as sentry post nearby (below). “Otto and Satori had secured a crèche site amongst thick foliage of mango (Mangifera indica) tree beside driveway. Brood feeding continued into the noon (below). 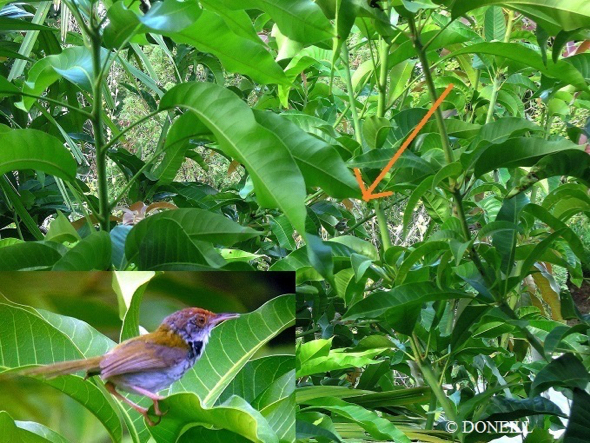 “At 13h40, Osai3 was spotted, perched on a rope strapped to a Java Palm (Livistoma rotundifolia) at edge of property. Fledgling received lunch of wasp from Satori (below). 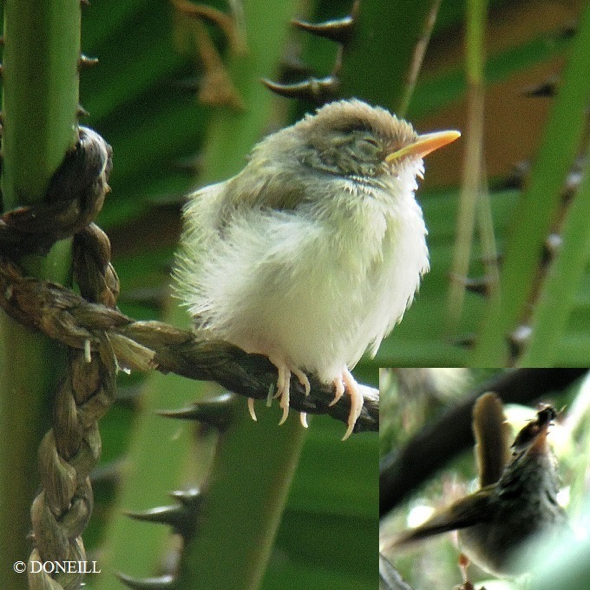 “Soft ‘cheep…cheep’ calls were heard from a direction nearby. Osai1 and Osai2 had secured vantage positions up a coniferous tree species, beside the palm (below). 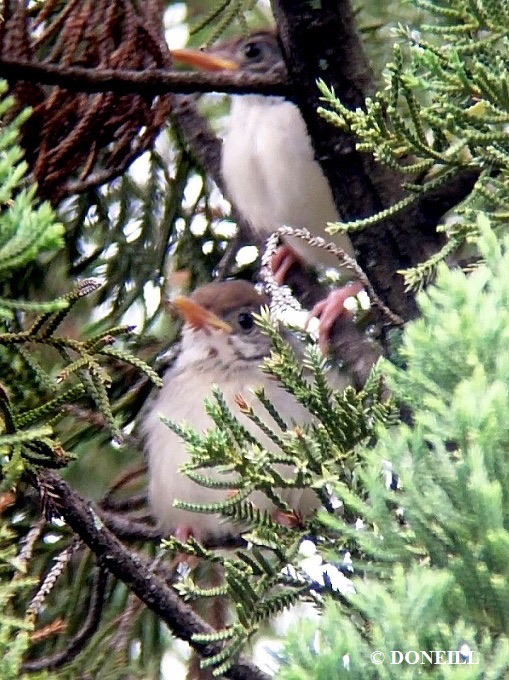 “What a world they have been brought into- a world of sounds of sorts. From the wheezing of vehicles passing by to territorial calls of House Crows (Corvus splendens) and menacing chuckles of Common Myna (Acridotheres tristis) and recently, the high-pitched screaming calls of a male insect- cicada.

“Osai3 finally joined them at 14h20, or just about showing its feet and hidden behind branches (below). 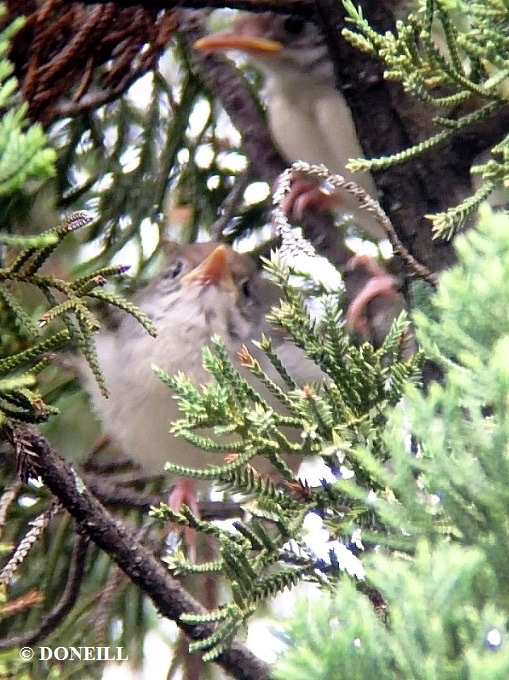 “It was the last time the trio was seen together.

“It rained that same evening; one fledgling took shelter under the pergola. The rest nowhere seen, but within the vicinity of my property as contact calls from adult birds continued to be heard nearby.

“Next day, calls of Common Tailorbirds could still be heard coming from Otto (male) but I was unable to locate the brood.

“Later in the day, my eyeballs spotted Otto and followed. He was flying towards a large strangulated fig tree (Ficus benghalensis) about 33 m away, alongside river bank. It appeared to be parent tree of similar species to the Ficus sapling, which sprouted from pot and hosted nestlings of Otto and Satori (below). 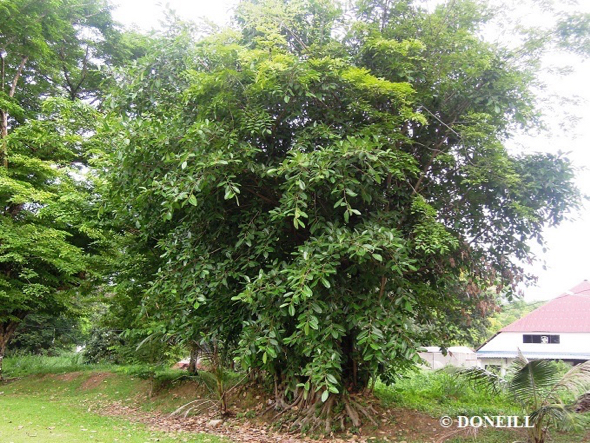 “With binoculars 10×32, my search eventually found two fledglings amongst thick foliages, high up the strangulated fig (Ficus benghalensis) tree. The third fledgling hidden was not seen. It was 17h57, 20 May (below).

“From adult plant to sapling and back to supposedly mother plant, Otto and Satori – breeding pair of Common Tailorbirds had successfully fledged a batch of 3 chicks to the tune of one full circle- their choice of breeding habitat for season April-May 2019. 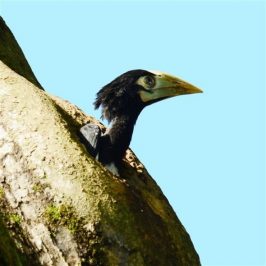