“Parenting role of Otto (male) and Satori (female) – pair of Common Tailorbirds (Orthotomus sutorius) was soon to come to end this season, April-May 2019.
Fledging day came on 19 May, exactly 14 days from day of hatching.

“Three chicks – Osai1, Osai2 and Osai3 woke up to meet a new dawn at 08h00. It was also the last time this brood was seen together, over breakfast of green caterpillars, provided by parents – Otto and Satori.

To my dismay, having left my monitoring post for breakfast, Osai1 and Osai2 decided to fledge in my absence. They were escorted out by Otto, the parenting male, Common Tailorbird and had taken refuge amongst the Areca palm (Dypsis lutescens) frond nearby.

“To recall, a commotion of chirping mixed bird calls caught my attention. A curious Yellow-vented Bulbul (Pycnonotus goiavier) was spotted gurgling from a security grill perch nearby. Was bulbul an intruder that Otto’s alarming calls were trying to ward off or was former joining in, welcoming a happy chorus, I couldn’t say.

“I was unaware, Otto had been all along hiding and babysitting the two newly fledglings amongst the palm fronds, waiting for the third to join them.

“At 09h01, it had observed Osai3 was left behind – alone and close to nest’s edge, with feet remaining inside.

“Osai3, the youngest chick was not ready to take that maiden flight –a leap of faith in fledging (below). 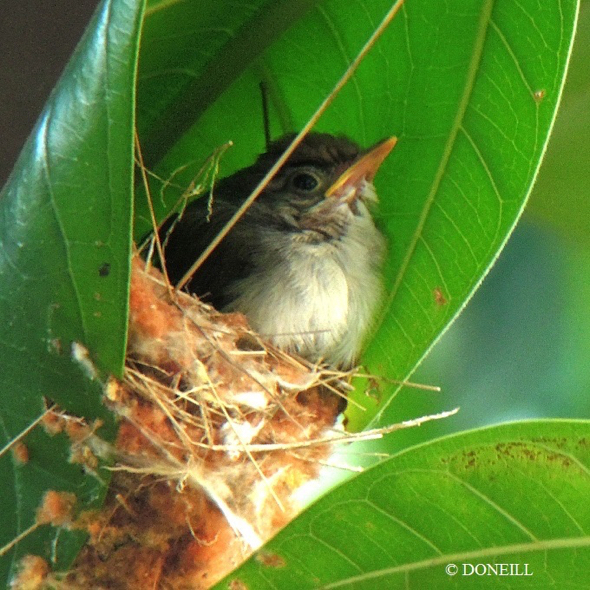 “It was observed that nestling took short naps, raised wing and preened and at a point, unsteadily came close to a fall.

“Observing and documenting fledging moments of chicks in photography is hard to come by, one needs to be extremely lucky, be around at right time, right place, with right optics – photographic equipment, together with sharp, executing skills and patience. Most of all – have the passion of enjoying and doing it all right.

“Thus, it is worthwhile investing more time, in describing fledging moments of a Common Tailorbird chick.

“It was also an opportunity to observe, how Satori-parenting female Common Tailorbird strategised Osai3’s fledging from nest.

“Satori had flown in earlier to provide a morsel feed to Osai3. This time, she flew and perched nearby without food- prey (below). 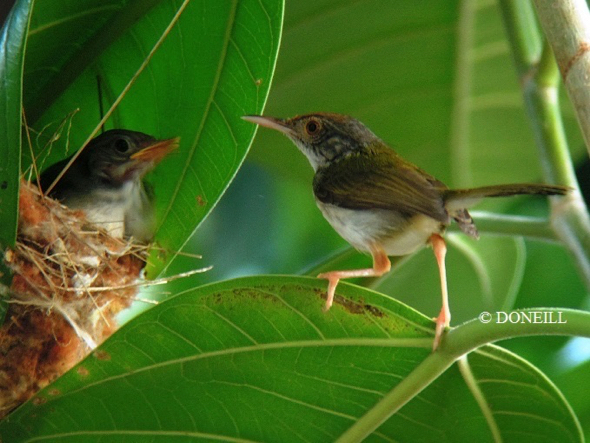 “In communication language call with chick, she subsequently flew off leaving nestling to its own device (below). 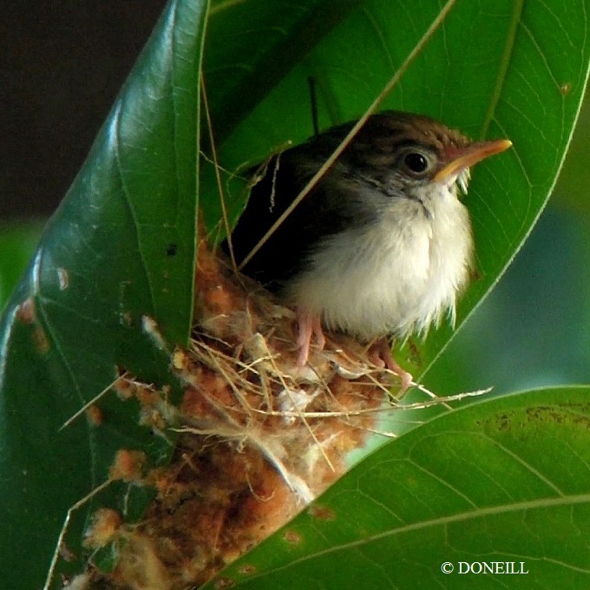 “Eventually, Osai3 slowly crept forward; perched on nest’s edge with toes exposed, preened and shut eyes in between (below).

“Small, hungry tweets heard coming from direction of nest. This was responded by the arrival call of Satori, with a serving of wasp. It was 09h06.

“Osai3 wasted no time responding to direction of ‘food bell’. Osai3 cranked its neck to reach prey that got sent straight down its throat in a jiffy (below). 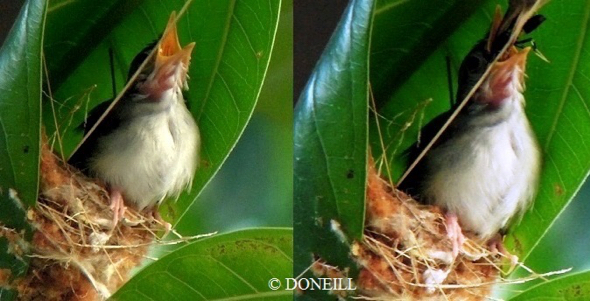 “This time, Satori did not take flight but flew onto upper branch, sending a flying lesson message to an on looking, bewildered Osai3 (below). 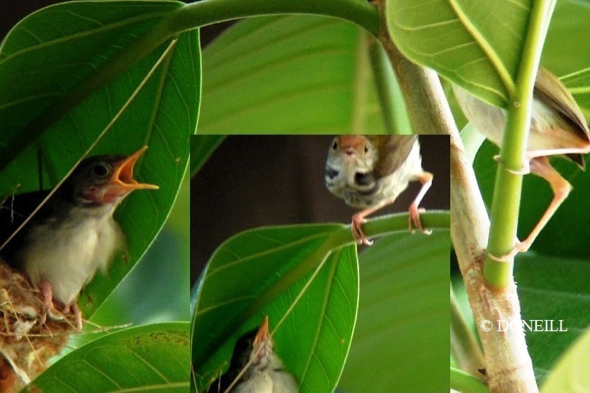 “Satori’s next arrival was 09h17 and brought no food; only gestured to Osai3 by looking upwards and sideways (below). 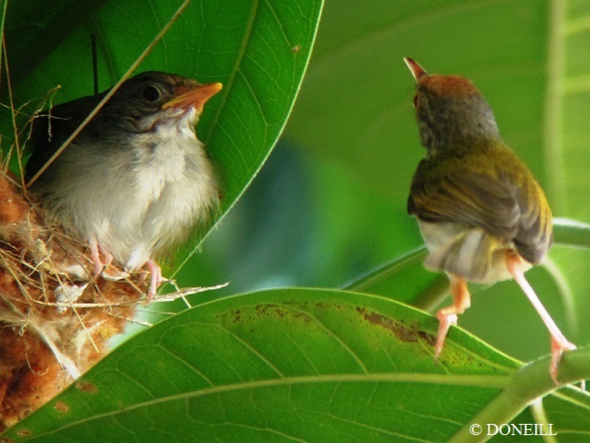 “She flew off leaving a hungry Osai3 in distraught (below).

“At 09h30, Satori returned and regurgitated a meal, to ensure chick did not go too hungry (below). 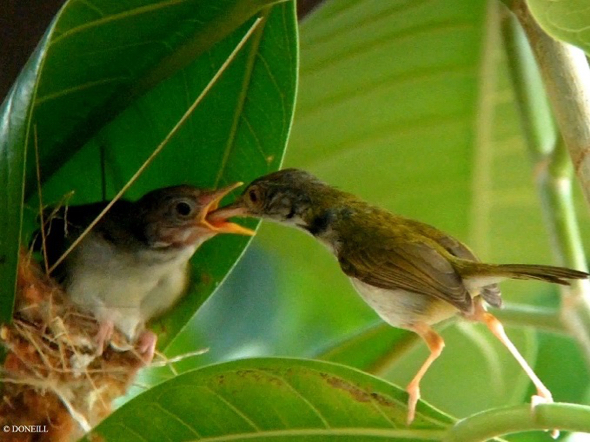 “This was well received and nestling settled down and dosed (below). 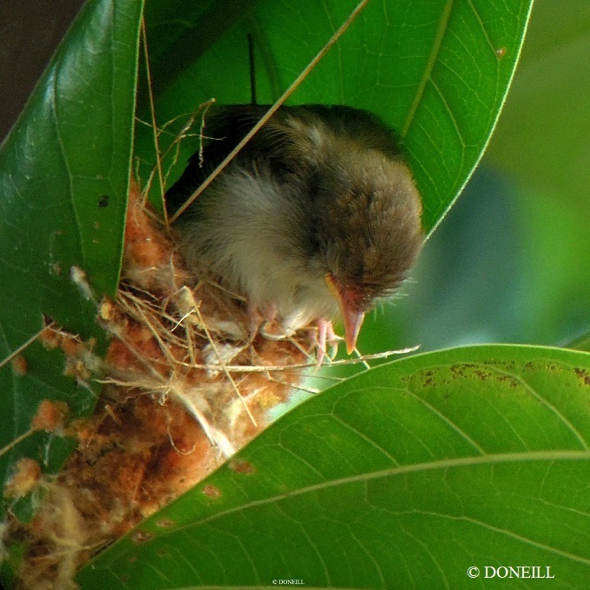 “Awoke at 09h45, Osai3 made effort to fly by raising its wing, stood up, forwarded but lost nerve and retracted same. Osai3 came close to taking another tumble off nest. Flight plan abandoned (below). 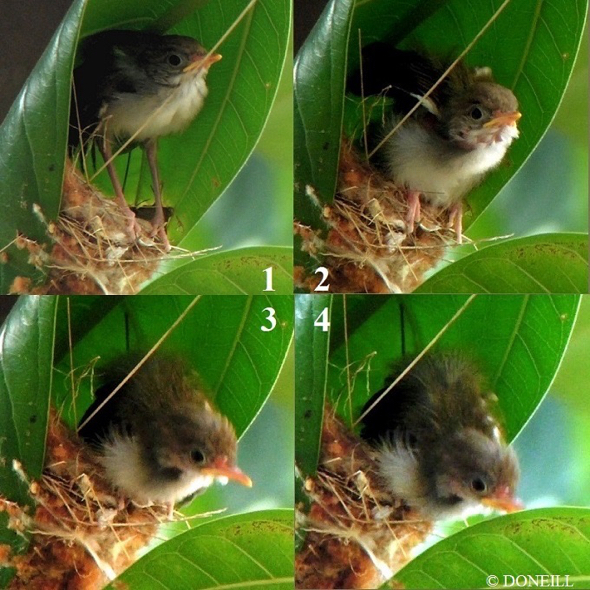 “When no further arrival of food deliveries came, hungry Osai3 lost all patience upon seeing parent showing up with nothing to offer.

“Angry chick wasted no time to show its displeasure and was quick to send parenting bird – Satori to flee; or rather parent flew away telling chick, ‘Have to fly now!’ (below). 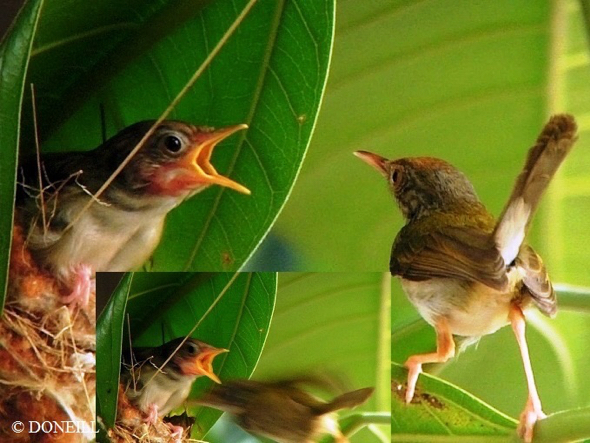 “Osai3’s chirping calls were ignored, as it looked desperately around in vain for female parent, while grasping edge of nest foliage with its right foot, for support and added security.

“Another attempt to fly was made to test out what wings could do, while right foot still wouldn’t let go (below).

“Finally at 09h53, having gained some wing confidence, a reluctant looking Osai3 directed eyes at leaf stalk nearby for a safe perch, raised its wings, stood up, released its grip on foliage edge and took its maiden flight.

“Strips extracted from videography (above, below).

“Newly fledged chick grabbed the leaf stalk as it landed and dangled from it for dear life and sat itself up. 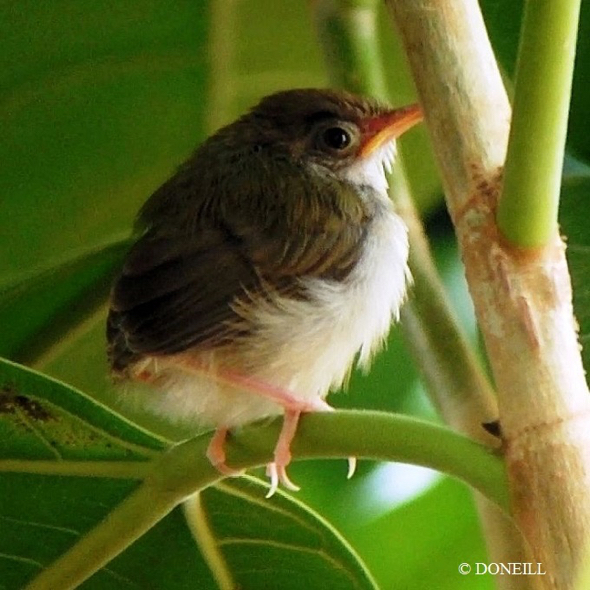 “It is time to join siblings – Osai1 and Osai2… in next episode.” 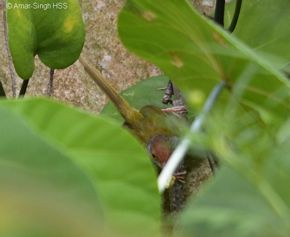