“It was observed, Satori (female) parent Common Tailorbird (Orthotomus sutorius) slept with newly hatched chicks in their ‘birthday suits’ for at least three consecutive nights, for protection and warmth until their spiky feathers grew.

“To obtain best views and monitor bird activities from my limited, bedroom observation post, a little strategy was devised. Gradual rotation of flower pot, over few days, with least detection by parenting birds was made.

“Over a two week period, observation of favourite landing and launching spots of Otto (male) and Satori (female) was also established. I kept my aim at those spots with DGscope for anticipated photography of swift arrivals.

“With ‘all clear’ signal given, Satori took no later than a second or two, whilst performing the classical ‘look right-look left’- safe strategy approach, she launched her flight of feeds.

“Chicks were fed as she hopped onto and astride the nest (below). 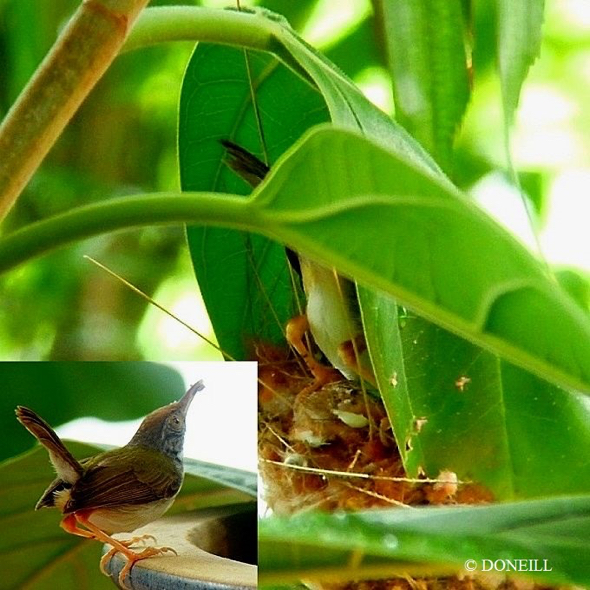 “An interesting observation issued during early stages in feeding. Otto was spotted perched on leaf stalk and billed a prey (below). 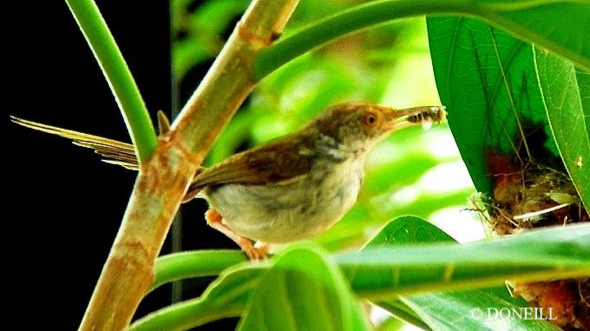 “Very gently, prey was passed over to Satori, who readily received it whilst attending to chicks in nest. Chicks were just four days old (below).

“It was not until chicks were five days old that Otto was first observed to be sharing in active feeding activities (see video below).

“This further observation supports the notion; the intricacies of nesting- in addition to stitching of leaves, feeding young at fragile stage is best left to female Satori.

“Otto had favourite landing spots too. In addition to sentry post duties amongst potted Areca palm (Dypsis lutescens) nearby, his favourite perches were leaf branches and stalks of Ficus benghalensis (below). 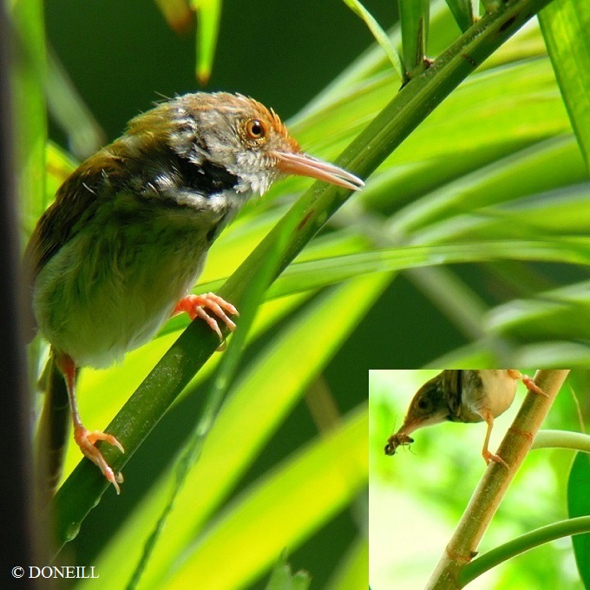 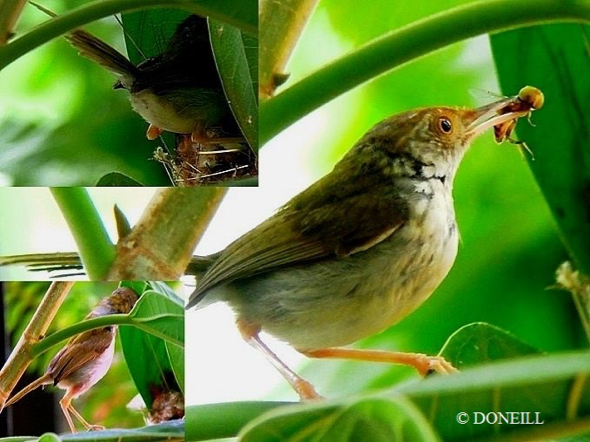 “Imminent increased in food demands called for additional role in active chick feeding; and this activity was included in his list of male responsibility.

“While female’s approaches were mostly done on the quiet, Otto –the noisy one announced food arrivals. That ‘Pavlov’s experiment’ style from Otto soon became a conditional reflex for chicks to wake up and be ready for feeds.

“From seventh day onwards, it was observed chick- feeding by striding over nest was no longer a necessity. At times, Otto and Satori were able to reach out to hungry chicks by precariously perching and balancing themselves on stalks or leaf’s edge (below).

“There were also small opportunities to observe food deliveries and team work by same arrivals of Otto and Satori (below). “Having fed one, it was observed Satori tore portion of food-prey, snared from Otto’s bill and fed to chick (below). 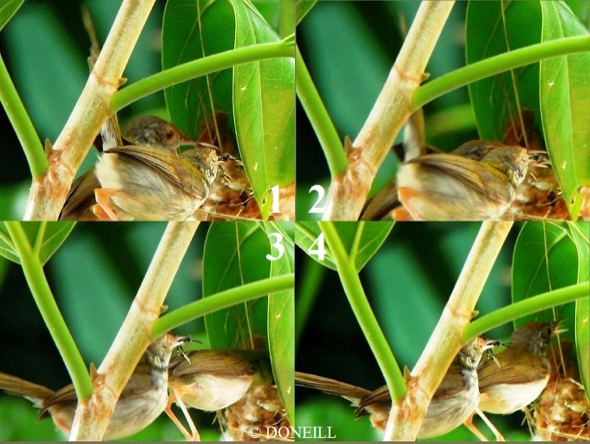 “Regurgitation of foods was also observed in one feeding session where Otto provided two chicks in a sortie (below). 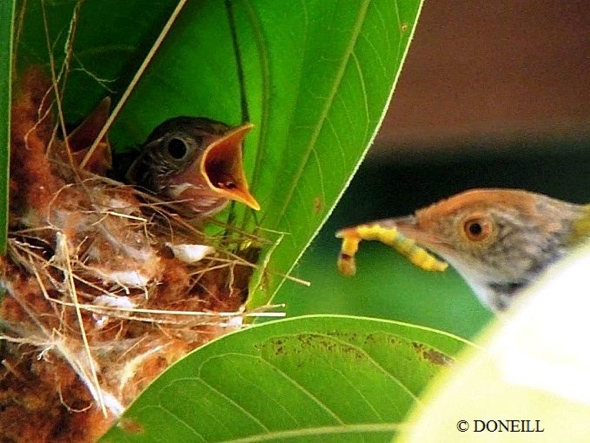 “Do they play fair? How do parents know who to feed first considering food arrivals were brought in at different times and mostly individually (below)? 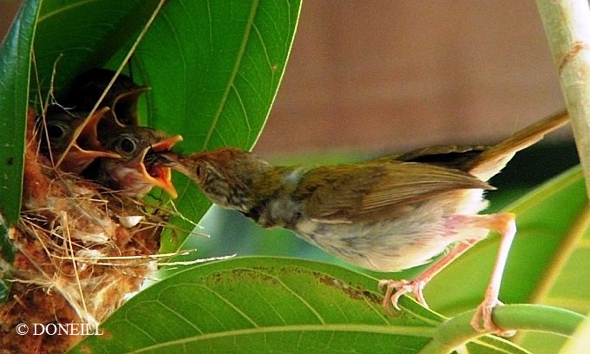 “Based on the many images reviewed, I came to conclusion; oldest chick Osai1 had best advantage. Being oldest and strongest, it clamoured over weaker siblings. Osai1 had the ability to quickly reposition itself; to garner best position for extreme right or extreme left in nest situ, whenever food calls rang from Otto (below). “Youngest chick- Osai3 at most times got squeezed in between, pushed to behind or trampled. Disadvantaged by smallest and being weakest, Osai3 at times had to wait until older siblings were satiated and took to sleepy mode, before former was rewarded with some exclusive feeding moments (below).

“It was also observed, based on parents’ position of landing perch, nearest chick to parent was most likely to receive feeds (below). 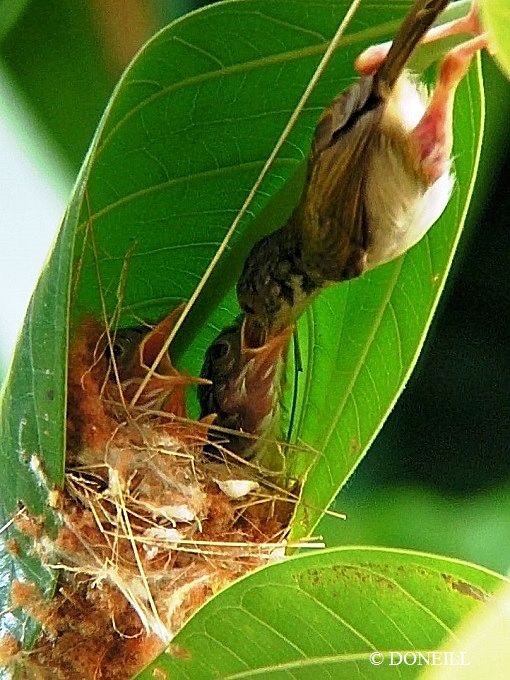 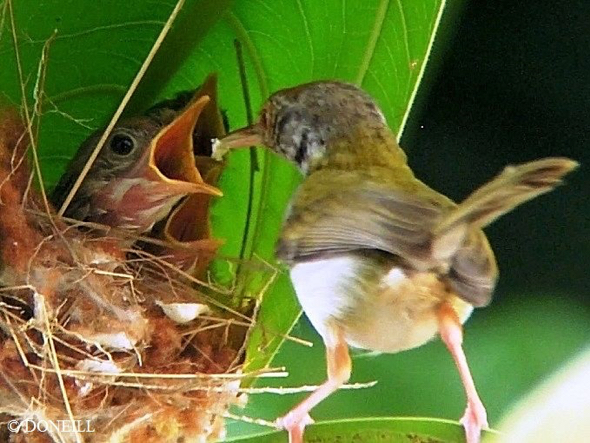 “It is a tough and unfair world out there, Osai3… but mother knows best (below).

“Which chick received the mystery gift of stink bug’s eggs?

“Join me for another episode….the output factor.” 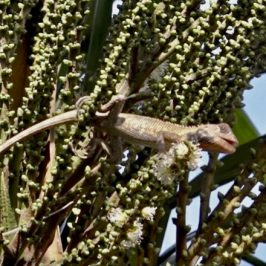 A male Changeable Lizard (Calotes versicolor) was quietly stalking insects among the flowering stalks of...