“The vertical up-and-down movements of the tail of this bird amuse most people who come across it. Pink-necked Green Pigeons (Treron vernans) do it too. Experts describe this behaviour as tail flicking. Other forms of tail movements include tail flashing and pendulous movement. Tail movement is a behaviour that is observed in many bird species but surprisingly, is also one which has received little attention in ornithology.

“In ornithology, tail movements are often described during courtship display (Fitzpatrick 1998, 1999). However, most bird species that show tail movements do so throughout the year, not just in the breeding season.

“According to this article, possible reasons include sexual signal addressed toward a potential mate, a cue of an individual’s perceived danger or alertness, an encounter with a predator, an alarm signal and a signal of submission, among others.

“In the case of this male Thick-billed Green Pigeon (Treron curvirostra) (see video above, image top), what was the motivating factor/s which made it pump its tail in an almost consistent tempo? Was it a sexual signal as a female was seen perched a short distance away? But I understand that its breeding season is at the beginning of the year.

“Then could the presence of the many birders under the tree be the influence of its tail pumping behaviour? Did it perceive danger and look upon the many humans as predators? An interesting topic to pursue.”

Note: No music was added so as to present the bird in its natural habitat (with some background ‘noise’). Anyway, no playing of music allowed in the park. 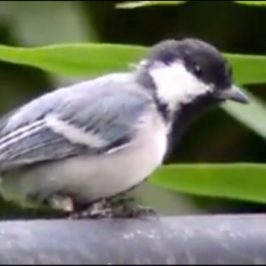 “Yesterday I witnessed something really unusual. A Cinereous Tit (Parus cinereus) with a right foot...