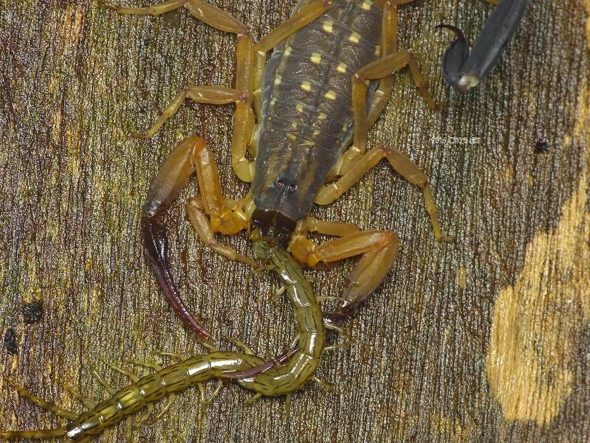 The video of a Spotted Scorpion (Lychas scutilus) eating a centipede was recorded way back in April 2016 by Ei Leen Ong. Evp David spotted the scorpion and assisted in providing torch lighting as well as ultra violet lighting for Ei Leen to video the scene.

Scorpions are venomous predators. They are armed with a large pair of pincers and a venomous sting at the end of its long tail. The pincers are covered with tactile hairs that alert the scorpion to the presence of a prey. Once alerted, the pincers come into action to capture the prey. A small prey is immediately crushed by the powerful claws while a larger one is stung, the venom causing paralysis or even killing it.

Centipedes are also venomous predators, using their antennae to seek out their prey. However, they are no match to this large scorpion.

According to Wikipedia: “Scorpions ingest food only in a liquid form; they have external digestion. The digestive juices from the gut are egested onto the food and the digested food sucked in liquid form. Any solid indigestible matter (fur, exoskeleton, etc.) is trapped by setae in the pre-oral cavity and ejected by the scorpion.”