The Oriental Pied Hornbill (Anthracoceros albirostris), as seen in the video below, is scratching its head. Note that the left leg arises from the above of its left wing. This is the indirect method as seen among arboreal birds.

Normal speed may not show the rising of the left leg above the wing clearly, so a slow motion segment is provided below.

Now why do birds need to scratch the head in the first place? Obviously when there is an itch on the head. The foot is used, as using the bill is out of the question. The foot is also used to preen the head feathers LINK. 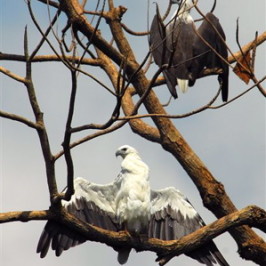