A family of Oriental Pied Hornbills (Anthracoceros albirostris) recently raided a bulbul’s nest in a bamboo clump growing in my front neighbour’s garden. One of the hornbills successfully flew off with an egg or a chick. Since then the family regularly checked on this particular bamboo clump (below – BC). This time around when the hornbills arrived, Amber Lau immediately informed me of their presence. One of the hornbills managed to catch a bird (probably a Javan Myna, Acridotheres javanicus) and was tearing it apart perched on a TV antenna at the top of her house (below – TV). 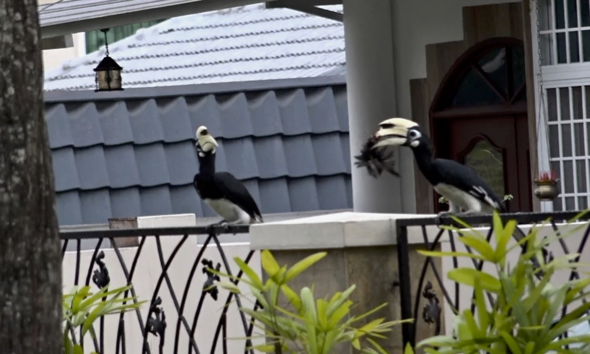 The hornbill landed on a nearby tree still with the dead bird between its mandibles but somehow lost the prey when it flew further away (video below). The hornbill next flew to the houses in front of Amber’s, flew down to the kerbside, picked up the dead bird and continued tearing it apart (above). A passersby disturbed the hornbill and it flew off to a nearby tree with the prey.

It was an exciting few minutes and we have the incomplete video recording to show for it.

It would appear that hornbills are getting more and more common in urban Singapore, especially after nesting boxes were introduced to encourage their breeding LINK. 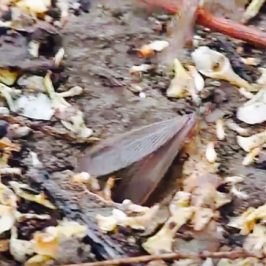