An earlier post on the Paper Wasp (Polistes sagittarius) ended further observations when the colony was destroyed by insecticides LINK. This allowed me to collect the nests for closer examination LINK. 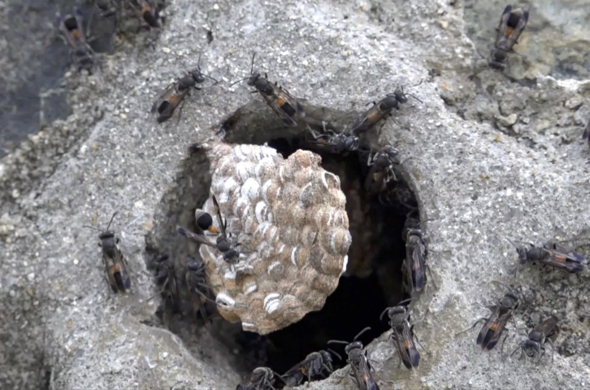 This time around, another colony has developed at around the earlier site (above). The flattened oval nest is attached at its top “corner” to the entrance of a concrete drainage channel running through a retaining wall of a house that runs parallel to a walkway. The openings of the cells face inward so it is not possible to see what is going on, especially the feeding of the larvae and the emergence of the adults from the pupae. A number of such colonies are visible further inside the channel. 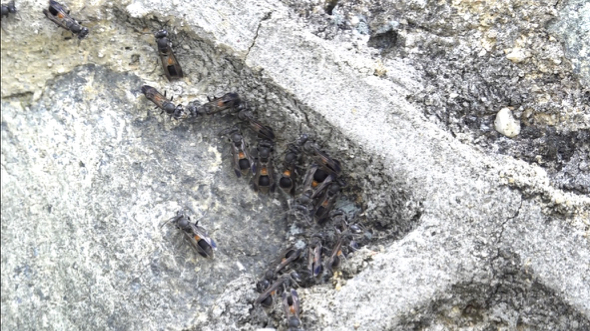 Paper Wasps are seldom aggressive. As this outermost nest was attached at the inside of a concrete tube flushed with the retaining wall that is next to a walkway, it is not possible for pedestrians to accidentally make contact. Most mornings there will be plenty of wasps resting on the wall surface around the opening of the colony (above). The wasps occasionally fly about. In the afternoon most of the wasps will not be around. Passers-by can get stung and a few did, only when they accidentally walk into a flying wasp or try to swat at them flying around the head.

I was able to video the nest within less than a metre away without being stung (see video below). A curious wasp did land on my arm that I gently blew it off. A few flew around my head but did not land. 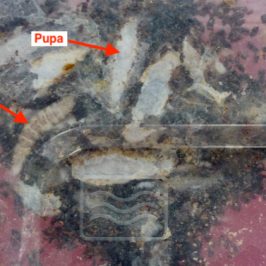 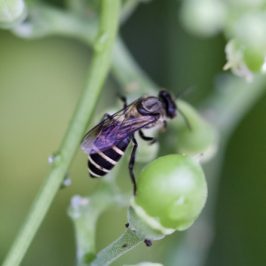