Shanmuga Sundaram managed to video two crocodiles battling each other at the Sungei Buloh Wetland Reserve. A mighty clash indeed.

Things are getting exciting at the reserve with the presence of the Estuarine Crocodiles (Crocodylus porosus) some years ago – see also HERE.

Another large reptile present at the reserve is the Malayan Water Monitor (Varanus salvator). Many can be seen sunning themselves along paths, at the water edge and in the many freshwater ponds around LINK.

Compared to the monitor lizards, Estuarine Crocodiles are less conspicuous. Not so the many signs warning visitors of their presence.

According to Clarinda Yap “Our favourite croc, the one without it’s tail, won the fight with a thunderous whack to it’s opponent, sending it fleeing for life. They both came to rest directly beneath the main bridge. No visible injuries seen, just some shattered ego that’s all.” Background information on the tailless crocodile and be found HERE. 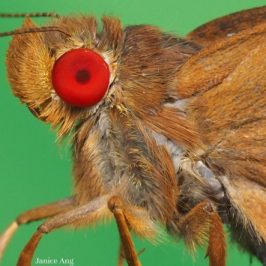 “The Common Redeye (Matapa aria) is a moderately rare butterfly, first observed in Singapore in...