“I was privileged to meet a very accommodating immature Emerald Dove (Chalcophaps indica indica) in dense jungle (below). “I first saw it fly in to perch on a tree and then descend to the open ground under dense jungle canopy. I followed and approached slowly and we reached an agreement at ~ 4 meters. I was allowed to watch feeding behaviour for a long period as it moved about on the forest floor. “Feeding consisted mainly of finding fallen seeds/fruit in the dense leaf litter. The vast majority were small fruits/seeds but occasionally it took large ones (above, below). “Fruit/seeds were not processed but swallowed whole. It used the beak to push aside leaves to find food items; it did not use the feet. Images were taken under dark canopy with high ISO; the constant head bobbing as the bird walks makes sharp images a challenge. No flash was used.

“I attempted some videos using a dead branch as a prop (some parts a bit choppy) – see edited video clip below.

“The three images below show the plumage of this immature bird. “Note the pale, almost ring like appearance round the eye. The ‘supercilium’ above the eye could be early development of the white that is seen above the eye and extending behind it. “The pale grey bands that cross the lower back are already in development. There is barring on the neck, front and sides of the breast. The bill and feet have yet to develop any adult colours. 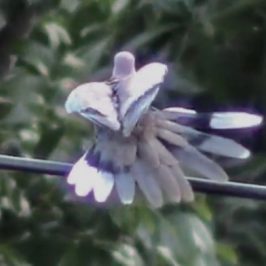 The Laughing Dove’s (Streptopelia senegalensis) so-called antics as shown in the video is actually part... 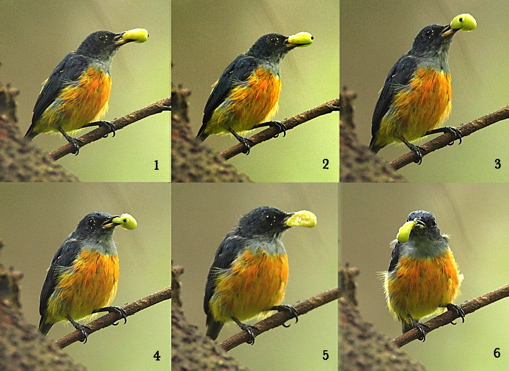 Yes, how does an Orange-bellied Flowerpecker (Dicaeum trigonestigma) tackles the fruits of the Indian cherry...