In late November 2018, Tinny G Unciano came across a clutch of tiny oval eggs scattered among the top soil of the garden. The eggs were white and about 5×4 mm. The eggs were collected and placed in a plastic container with some garden soil (above).

Within a week the eggs started to hatch, each giving rise to a snail. The shell appeared delicate, translucent and whitish grey to light orange-brown (above). Older snails had shells of light-brown upper spirals and translucent, whitish grey lower wider shell portion.

The newly hatched snails moved extremely slowly, burrowing into the soil to get out of the light (above). They were obviously nocturnal. They emerged at night to feed. The video below shows the week-old snails moving from the upper surface of the leaf where they were placed to the under surface, to get away from light.

According to this LINK, the snails need to consume a calcium-rich diet in order for their shells to harden. As the snail grew in size, new shell materials would be added to the old shell. The latter will end up in the centre of the shell spiral. As the snail grows in size, the number of these spirals will increase.

The snails were fed leaves of the Chinese Kale (Brassica alboglabra) or Kai Lan.

We plan to grow these snail hatchlings until maturity in order to have them properly identified. 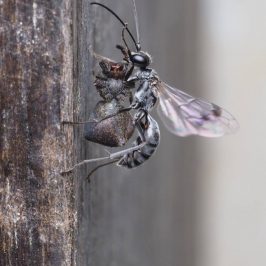 “This is a solitary wasp found throughout the world. It specialises in hunting spiders and... 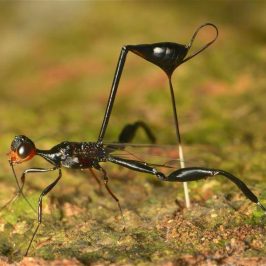 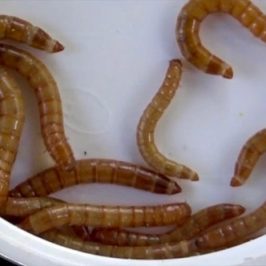