Parakeets at Sian Tuan: 1. The parakeets are flying in; 2. Gathering around coconut palms; 3. Activities on the roof.

I was directing my 300mm lens at the Rose-ringed Parakeets (Psittacula krameri) in the distant roof to video their activities. Suddenly a Red-breasted Parakeet (Psittacula alexandri) landed among the branches of a nearby Golden Penda (Xanthostemon chrysanthus) tree.

It started picking up individual fruits from a bunch with its foot (above).

The fruit was then brought to the bill (above)…

…to allow the hard shell to be cracked with its powerful mandibles so that the soft seeds can be released and eaten (above).

This was my first sighting of a parakeet eating these fruits and I had to act quickly before it flew off. The 300mm lens proved cumbersome as it brought the image of the parakeet extremely close in the viewfinder. I needed to desperately move back but there was no space behind me to do so. The video clip above is the result.

Once it flew off, another flew in but the second parakeet was somewhat hidden by the leaves, unlike the first which was more exposed. 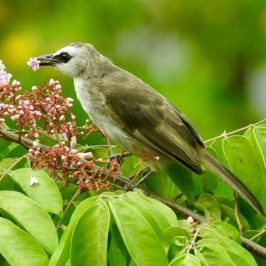 Heather Goessel’s image of the Yellow-vented Bulbul below shows the bird eating the flowers of... 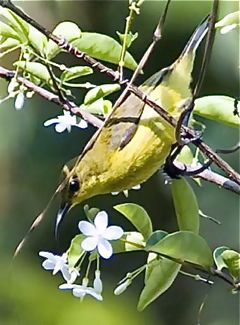 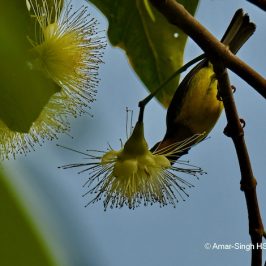 A pair of Brown-throated Sunbird (Anthreptes malacensis malacensis) was feeding on the nectar of a...