“Breeding season (February-September) for Spectacled Spiderhunters (Arachnothera flavigaster) was just about to end when a juvenile bird was spotted begging from a Malay Apple tree (Eugenia malaccensis).

“Parenting birds were busy feeding themselves and warding off intruders. A juvenile bird was observed flying from nearby tree from one to another, vying for their attention. Eventually, chick with orangey feet flew and settled onto low, horizontal branch and provided rare opportunity for closer look and anatomical analysis. “Image of an early juvenile shows lower mandible to be almost pinkish-salmon with reddish on upper and lower base. The leading edge of shoulder wing bend below protrudes a prominent cream-white lining which appears lacking or not prominent in adult birds (above).

“While overall olive-green/yellow/white plumages are somewhat similar to adults, there appear to be random blotches of yellow wash pronounced on chest and belly on juvenile. The word ‘flavigaster’ is a name well aptly used. “Under wing coverts of extensive white downy plumage is observed when juvenile raised wings to show its armpits (above). “Here is a comparison image of an adult bird taken ten years ago- at different location- prospecting Dedap (Erythrina crista-galli) blooms (above).. “The following images extracted from a 26sec. video recording, shows begging behaviour of a juvenile Spectacled Spiderhunter fluttering its wings profusely whilst circumventing its head and body, seeking out its parents’ attention (above, two below). “To mention in past observations, this behaviour of begging by a juvenile is also exhibited by adult female to male during breeding season.

“Unless observation is held close enough to view the difference, accurate identification poses a challenge when viewed against a back lighting sky up high on tree canopy.” 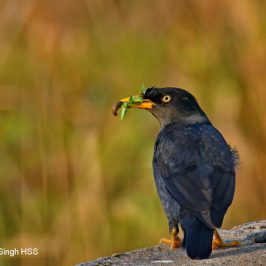 I saw a pair of Javan Mynas (Acridotheres javanicus) with prey for young (nest not... 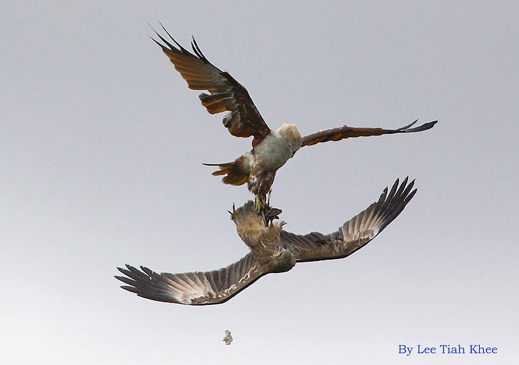