Flush-pursuit foraging is defined as startling prey which is then chased down and eaten (Hill, 2010). The prey can be pursued and captured on the ground or in flight. This is also known as “scaring up a meal”.

Birds indulging in flush foraging usually have bold patches of white or pale feathers on their wings or tail. These patches are flashed where prey might be hiding, usually on grassy patches or foliage.

Studies on Redstarts (Myioborus spp.) showed that when the white patches on their wings and tail were masked with black markers, their prey-capture rates were much reduced as compared to when they were not masked (Hill, 2010).

The most common local species with a white patch on the wings is the Javan Myna (Acridotheres javanicus) (above). This is also seen in the Dollarbird (Eurystomus orientalis). White patch on tail feathers is seen in Pied Fantail (Rhipidura javanica) 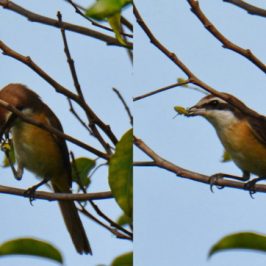