MeiLin Khoo’s two videos of the nesting Pied Fantail (Rhipidura javanica) were documented at Gardens by the Bay in July 2018. An earlier video, see HERE, shows the adult eating a very much younger chick’s faecal sac immediately after feeding.

In the first video below, the adult waited after feeding a chick to pick the faecal sac the moment the chick ejected it after feeding. The adult flew off with the sac to dispose it some distance away. The adult did not eat the sac as the chick was older and its digestive system more efficient, thus the adult would not benefit by swallowing the sac

The second video below shows the adult waiting for the faecal sac but the chick was a little late in ejecting it. So the adult left without the sac.

Note that the adult fed one chick at a time. 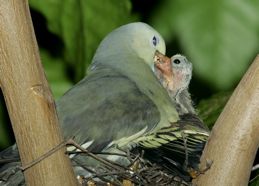