“Shortwings are not easy birds to see, often in dark undergrowth, and this makes appreciation of the plumage difficult. The male Lesser Shortwing (Brachypteryx leucophris wrayi) from E-central range are prominently brown (Wells 2007) while those in the region I was watching are described as having dark smoky-blue or slaty-blue upper-parts with black flight feathers and tail. The neck and breast are smoky grey (Wells 2007, HBW 2018). “I have seen them occasionally in the highlands and on most occasions the males I spotted have a brown wing. “Wells (2007) states that ‘In at least some males, full development of blue is spread over more than one moult bout, intermixed with an adult female-type plumage’. This is a possible explanation for what I am seeing and the bird I saw could a first year male. However a search for images of males taken in the region shows that 80% of male have a brown wing (I have ignored those that are obviously juvenile or moulting). “Looking at those with brown wings, there is also much variation in intensity of colour (could partially be due to lighting) and some have a little brown in the tail. “I suspect that there is a possibility of intergrades or colour variations in the region. “Of course I could be completely wrong and most of us seem to image predominantly 1st year male birds. 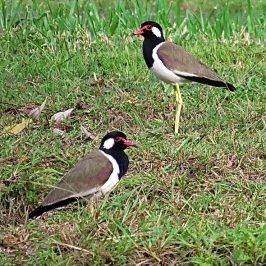