The two hole-nesters were fighting to claim a nesting cavity excavated on the trunk of an old palm tree. The cavity could have been recently abandoned by an unknown pair of birds.

Nesting cavities are in short supply in Singapore as any old trees are removed as soon as detected, for safety reasons mainly. So, there is always a fight for such “real estate”.

The confrontation happened suddenly and ended two seconds later. But GaoJian was ready and managed a few interesting images to record the event.

As is usually the case, the woodpecker moved as a pair. When the barbet flew to the opening of the nest cavity, one of the woodpecker immediately attacked the former, pulling it away from the cavity entrance (see sequence from top down). The woodpecker’s attempt was futile as the barbet clung on firmly to the palm.

On the following morning, Siew Mun witnessed the continuing saga of the battle for the nesting cavity. Two barbets were seen flying to the area. Nothing happened for more than 20 minutes until the arrival of the pair of woodpeckers. One cautiously entered the cavity while the other flew off. When the woodpecker inside the cavity emerged, it was suddenly attacked by a barbet. Both the barbet and the woodpecker then flew to a nearby tree.

The pair of barbets flew out of sight. The woodpeckers remained where they were for almost 15 minutes before flying to the palm tree to claim the nest cavity (above).

The saga continues… Hopefully there would be photographers at the site to document further confrontations, if any. 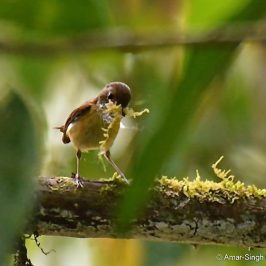