“On the morning of 19th February 2018, I was alerted to the excitement around the nest of the Olive-backed Sunbird (Cinnyris jugularis) in my balcony. “To my dismay I found that the chick that was about to fledge, was hanging outside the nest. It was dead and held by strands of human hairs, entangled around one of its legs. “From my deduction I think the chick must have died before being fledged as the feather developments were not fully formed for the chick to be able to fly. “So the parents must have tried to extricate the dead chick from the nest and found that one of its legs was caught among some human hairs that was used as nesting material. “I think the use of human hairs is a mistake as these are not as pliable as natural materials from plants. Human hair tends to maintain it straightness and not easily stitched into the mass of other natural fibres. Thus human hair tend not to conform to the structure of the inside of the nest and sticks out forming trap situations that the chick will be caught in. Human hair unfortunately nowadays can be easily found everywhere in our urban environment. “On another occasion immediately following mine, my wife’s cousin living two floors up also found that the chick’s leg was also caught and the bird was hanging upside down trying to fly away. Lucky for the chick it was freed from the deadly situation, when the hair holding onto the leg was snipped off and the chick flew off to live for another day. “As for my situation I had to snip off a bit of the hair entangled around the dead chick’s leg to enable the parents to dispose of the carcass. “My pictures show how difficult it was for the parent birds to try to remove the carcass before my intervention. The other thing I noticed was that the female was doing most of the hard work.” 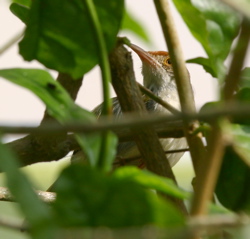 Tan Gim Cheong came across the nest of the Large-tailed Nightjar (Caprimulgus macrurus) at Tuas,... 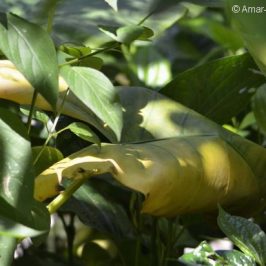