Through the courtesy of Wong Weng-Fai, we obtained Waikai Yeong’s animated gif of 100+ photos showing the courtship behaviour between a Red Lory (Eos bornea) and a Coconut Lorikeet, also known as Rainbow Lorikeet (Trichoglossus haematodus) documented at Singapore’s Bishan Park. Due to technicalities we are not able to post it here. However, selected images are included in this post. “In aviculture, some breeders do hybridise the two species to get birds with unusual colours, and the offspring are often sold in pet shops. And as often happens with hybrid offspring, there is considerable variation between individuals. “Which brings me to another point – the Pohnpei (also known as the Ponape) lorikeet (Trichoglossus rubiginosus). “In the late 1980s there were many more imports of wild-caught parrots into Singapore, and specimens of the Pohnpei lorikeet did show up in the pet shops. The bird traders brought in many unusual species from really out-of-the way places. Pohnpei (or Ponape) is in Micronesia, quite a distance north of Papua New Guinea. “I looked at quite a number of Pohnpei lorikeets, and could not help noticing that they bore a remarkable resemblance to some of the Red Lory/Rainbow Lory hybrids that were being commercially produced. Their basic colour was red, but overlaid with the black bars on the chest that the colour variety haematodus haematodus of the Rainbow Lorikeet displays.

“There are many different colour varieties and races of the Rainbow Lorikeet, some with bars, and some without. “I have often wondered if the Pohnpei lorikeet is simply a natural hybrid of the Red Lory and the Rainbow Lorikeet? “Though Pohnpei is a long, long distance from the mainlands where both species are found, there are islands dotting the seas in between. Could birds that lost their way, or were blown off-course during tropical storms, have ended up in Micronesia, and, not finding mates of the same species, settled there and hybridised to produce what we know today as Pohnpei Lorikeets?” 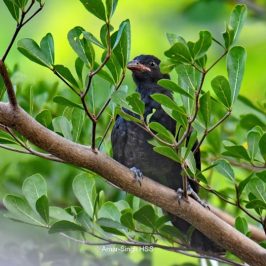 Part 1 can be viewed at this LINK. “I met up with the juvenile Asian...

“I have seen parakeets visiting mangrove trees occasionally and observed that they seemed to be...