“I was surprised recently to see that our good Webmaster had exhumed some notes that we had exchanged almost four years ago and put them together into an article which he published on this website LINK. Upon being queried, he implied that I should well understand the problem of not having enough material.

“Yes, I used to work in the local Mainstream Media. And I remember the desperate evenings when no politician had said anything the whole day, no world leader threatened another, and no socialite slapped any one of her husband’s many mistresses. The editor, without fear of being featured in a sexual harassment suit, would shout: “We have got to get something in!” and we would scurry to call our friends in fire stations, police stations and the emergency rooms of various hospitals to find a good(???) disaster to fill our pages.

“Well, to give our Webmaster some temporary relief to fill his pages, I went through my old photographs and put together this update on what you can do in your garden to bring in more birds.

“Simply, you need to supply water, the right kinds of plants, and food, food, glorious food. Let’s go through the steps. And view the pictures of the birds that show up.

Water
“No, you do not need large ponds. Fibreglass or PVC tubs about 1.5 to 2 metres in length and holding about 200 litres will do well enough. They cost below Singapore Dollars $100 apiece and have lasted for years. I have half a dozen of these, sunk into the ground and planted with water lilies, in various parts of my garden. They also contain other plants that snails will eat. I stocked them liberally with water snails and free-breeding fishes such as croaking gouramis (Trichopsis vittatus) platies (Poecilia maculata) and mosquito fish (Gambusia affinnis), all of which you can obtain for feeding larger fish from most large aquarium supply shops. “A White Throated Kingfisher (Halcyon smyrnensis) took up the invitation to make himself at home (above). Too much at home. “He parks himself on the porch and not only helps himself from the ponds where the fish are stocked for his meals, but also often tries to see if the more valuable fish in my aquarium taste any better (above). “That is a close-up of him in the upper corner among the hanging orchids (above). “Sometimes, a Collared Kingfisher (Todiramphus chloris) also sneaks in (above). But not too often, because all kingfishers are highly territorial, and the resident squatter does not hesitate to tell off other freeloaders. “A serious fisherman is this heron (above). I am not exactly sure of the species. The ponds in the garden are where the Waterhens (Amauornis phoenicurus) hang out (above). In the seven years that I have been living in this house, many, many clutches of chicks have been hatched, and have been brought by their parents to splash and forage for snails in the ponds. “Of course, the water also brings birds that want nothing more than a drink or a bath. I do get Oriental Magpie-robins (Copysychus saularis) though they are sadly becoming increasingly rare, probably due to poachers, who trap these easily saleable songbirds (above). Plants.
“When I moved in, there was already a mature Weeping Fig (Ficus benjamina) by the front gate. When it fruits, which it does about twice a year, all kinds of birds come to feast. These include orioles, bulbuls, starlings, mynas and many others.

“What I added to the garden were rather conventional plants, selected primarily to be attractive, though, all things being equal, when deciding between two types of plants, the preference would always be given to the one that attract birds and butterflies.

“For fragrance I have Wrightia religiosa and Murraya paniculata. They are visited regularly by sunbirds. “For colour, I added Hibiscus and Straits Rhododendron (Melastoma malabarthricum) The latter deserves mention. Its fruits are favoured by many types of birds, among them both flowerpeckers (above) and sunbirds (below). And since this plant is not too tall, it can be planted close to the house so that birds can easily be observed through the windows. “The sunbirds have really made themselves at home, and used to nest regularly under my eaves (above). “Yellow-vented Bulbuls also breed regularly in my garden (above). I see their nests in orchid pots, among ferns, and in the palms. “I must mention a not particularly attractive plant that brings hordes of birds. Australian Mulberries (Pipturus argenteus) sprout all over the place in this area. I transplanted one to my backyard. In less than four years it has grown into a small tree which attracts green-pigeons (above), starlings, bulbuls, and even the occasional hornbill (below). “Of course it helps to have a neighbour who not only puts up with birds, but also likes gardening. Her Rambutan (Nephelium lappaceum) Chiku (Sapodilla) and Noni trees abut the fence between our two houses and attract their fair share of birds. Regular visitors when the fruits are in season are Rose-breasted Parakeets (Psittacula alexandri) (below) and Asian Koel (Eudynamys scolopaceus) (also below). “I will mention what I will NOT have in my next garden. Frangipani (Plumeria) and Bougainvillea will be left out. The Frangipani that I have are free-flowering and fragrant. But they are ecologically sterile. They have neither nectar nor fruit to attract anything. Bougainvillea are just too much trouble. They not only do not attract no wildlife, but they need to be pruned regularly, a painful job, given their many thorns.

“I also bought a Chempaka Kuning (Magnolia champaca) bush which is now a fair-sized tree. When it was in a pot in the nursery, the scent of the flowers was heavenly. That was years ago and also the last time I saw any flowers on it.

Food
“Finally, let’s talk about food. The quantity of wildlife that a place can sustain depends upon the food available. While not wanting to go into the moral issues of feeding wildlife, I like to think that I have built up a higher than normal density in my immediate neighbourhood through sustained feeding over the past six years.

“The wild birds here go through about five kilograms each of birdseed and chicken feed per week, plus about half a kilo of mealworms. Feeding is done three times per day, shortly after dawn, at lunchtime, and in the evenings. The birds have grown used to the regular feeding times. When both my wife and I are not in town, our nephews will happily take over the catering. “I have huge numbers of Spotted Doves (Streptopelia chinensis) in my garden, far more than you would see in any other area (above). I would love to see Zebra Doves (Geopelia striata) and they do come, but they cannot compete with the more dominant Spotted Doves.

“Also, I have to chase away any domestic pigeons that show up, since the Singapore authorities discourage people from feeding them. “Other seed eaters that drop in include Baya Weavers (Ploceus philippinus) (above) and the common Eurasian Tree Sparrows (Passer montanus) (below). Various munias do show up, but are discouraged from staying by the larger birds. “The regular feeding encourages the waterhens to breed, and they do so almost continuously (below). We find their antics, and also those of the very cute chicks extremely amusing. “One noisy fellow who considers himself the life of the party is a White Crested Laughingthrush (Garrulax leucolophus) (below). This North Asian species has been introduced to Singapore through the songbird trade. There is now a small but established wild population on the other side of the island from where I stay. A solitary specimen found its way into my neighbourhood. This demanding fellow shamelessly solicits handouts every time he sees me. Sometimes, he bangs on doors and windows if he knows that we are at home and not attending to his needs quickly enough.

Caveats
“Are you sure that you want lots of birds in your garden? I have to mention the downsides, chief of all being that you have to make sure your car is well covered. Bird droppings are extremely corrosive to automobile paintwork and should be washed off as soon as possible.

“And you have to watch your step because of bird poop on the pavement.

“Also, you have to stay on good terms with your neighbours. Fortunately, mine is the last house on the street, with no other buildings in front or behind. There is only one neighbour, and she quite likes birds. But not all neighbours do.”

I have been tending mistletoes growing on my sui mei (Wrightia religiosa) and chillie (Capsicum... 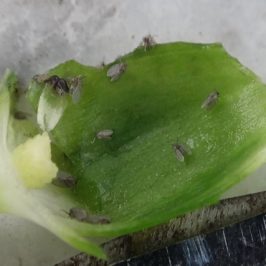