“Here are 2 dramatic photos of the Black-winged Kite (Elanus caeruleus) in hunting mode and these were taken by Dr Lee Van Hien from Singapore. “The first photo shows the kite having a tug-of-war with a House Crow (Corvus splendens) in mid-air, fighting over a rodent (above). The kite obviously was the predator but the daring crow, being a larger bird (41 cm) was using this opportunity to snatch the prey by tugging at the rodent’s tail, resulting in this highly dramatic shot. According to Dr Lee, the final outcome of this tug-of-war was won by the hardworking kite. “The second photo shows the kite perching on a branch with a freshly-caught and still very intact Lesser Coucal (Centropus bengalensis) indicated by its partially hidden brown-rufous wings behind the branch and its pheasant-like longish tail (above). This shot is dramatic because the prey is larger than the predator. The kite measures 33cm and the coucal measures 38cm. The kite is the more powerful bird in this instance and with its bright red eyes glaring in the photo, it definitely have the looks of a pretty assassin.”

One of bee-eaters’ favourite food, or at least what we perceive as its favourite, is... 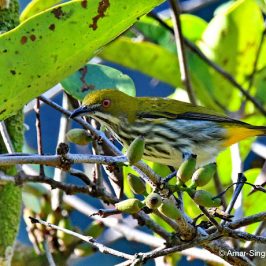