Chuah Yeow Chong observed a very interesting behaviour of the Blue-crowned Hanging-parrot (Loriculus galgulus). The hanging-parrot was cutting off bits of mango (Mangifera indica) leaves with her beak and tucking them into her chest feathers. This obviously allowed it to carry much more material at each go than holding pieces in its beak. The video of this behavior is shown below.

Yeow Chong wondered whether such behaviour is common among parrots. He had seen two different birds doing the same, one in the mango tree and another in a longan tree (Dimocarpus longan).

Steven Heng, who has been working with parrots, wrote that small species like the hanging-parrot do not fly off with nesting material in their beak. Instead they stick pieces in their feathers and fly back to their nest, both the male as well as the female.

Aviculturist Lee Chiu San has this to add: “I have no first-hand experience. But it has been recorded that some species of African Lovebirds (Agapornis) carry nesting material by stuffing it into their feathers. Most of the accounts say that they stuff the material into the feathers above the tail, and not so much into the chest feathers and LINK.

Chiu San added that “Our Asian hanging-parrots (Loriculus spp.) are related to the African Lovebirds, despite having a diet that consists predominantly of fruit and nectar, unlike the latter, which can survive on a diet of seeds. Because of their diet, lovebirds are much easier to maintain in aviculture. Their widespread popularity has no doubt enabled many more observations to be made. But as the two genera are related, it would not come as a surprise if there are also similarities in nest building behaviour.”

As far as the literature is concerned, Collars (1997) noted that female lovebirds of the “white-eye” group and hanging-parrots often tuck grass material into their plumage to carry back to the nest. Wells (1999) has this to say: “…cut nest-material and are said to carry it tucked into the plumage.” 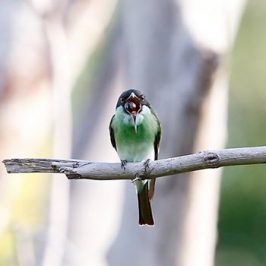