“Breeding season is here, and every morning the male Black-naped Oriole calls from the trees outside our fourth floor apartment. Usually it is hidden inside the canopy, but this morning it was out in the open giving stunning views; although I don’t own a camera anymore I couldn’t help myself, I grabbed one of Ng Bee Choo’s and produced this snapshot. Notice how the neck and throat sack balloons up when it calls. “Where I grew up in northern Europe, the Eurasian Golden Oriole (Oriolus oriolus) was rare and elusive. Here I love seeing the local species, O. chinensis, almost every day, what a stunning bird; the penetrating fluty whistle can be heard everywhere, even in the city. The Black-naped Oriole forms a superspecies with other closely related birds in Europe, Africa and India, the O. chinensis itself occurs in 20 identified subspecies. “However, exact status and taxonomy in Singapore is not entirely clear. Old literature suggests that we have two subspecies here: O. c. diffusus which is a winter visitor from China and Russia and O. c. maculatus, resident in Malaysia, Singapore and parts of Indonesia (for some reason it is absent from Borneo, apart from a few single records). I have seen the migratory diffusus in Thailand (where maculatus doesn’t occur), and it is strikingly different; it has bright yellow upperparts with just a narrow strip of black in the wing. I have never seen this form in Singapore, has anyone else out there? In fact, I wonder if it even occurs now!?

“Our resident form, maculatus, appears to be a fairly recent invader; 100 years ago it was rare in Singapore. Deforestation and possibly the bird trade from Indonesia enabled it to expand; today it is among our top-10 most numerous birds according to various surveys. With recent taxonomic revisions, the maculatus form has been proposed split into a separate species, Sunda Golden Oriole (O. maculatus); with Dark-throated Oriole (O. xanthonotus) now locally extinct in Singapore, that would then be our one and only beautiful taxon in the Oriolidae family.” 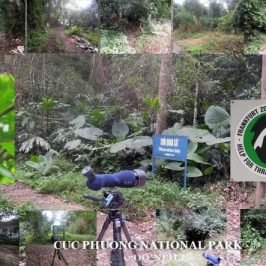 Willis was in Western Australia in December 2008 and visited Herdsman Lake in northwestern Perth....