After 3 days of absence, the female Crimson-backed Flowerpecker (Dicaeum cruentatum) returned to the nest site at 0845 hours on the eighth day (9th January).

A video surveillance set up at 0900 hours for 2.5 hours caught the male making a brief visit of less than 10 seconds (above). This was followed by a female half an hour later. The female picked up a piece of floss left on the outer wall of the nest and brought it into the nest to line the inside surface. She spent another 8 minutes inside the nest before flying off. Was she trying out the egg-chamber before laying her eggs?

There was another visit by the female about 8 minutes later but she flew off as if spooked by something or other.

An edited video clip is given below.

The following day (10th January), the female returned and continued limited touch up. From the 3 hours video surveillance in the morning, she visited 6 times – equivalent to 2 visits an hour.

There were a number of trips with nesting material where the female stayed inside the nest for 7-35 minutes (above). Again, the male was seen only once and he only looked into the nest, not entering it like what the female did.

When there was a drizzle, the female remained in the nest. In the late evening, she left the nest, not returning for the night.

An edited video clip is provided below:

These were the pre-egg laying days and the female had to make sure the nest was comfortable enough for her to spend weeks incubating her eggs followed by brooding her chicks. The male never entered the nest as he would most probably not be involved in incubating and brooding duties, maybe only feeding the chicks? 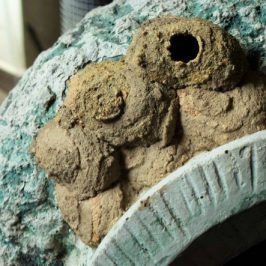 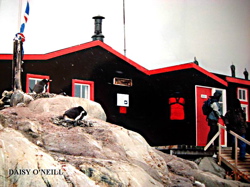 Human beings build houses to live in, many turning them into homes to raise a...