The nest of the Scarlet-backed Flowerpecker (Dicaeum cruentatum) was completed on day five (6th January). As it was raining nearly the whole of the fourth day and the flowerpeckers were nowhere in sight, the actual number of days to complete the nest was four days.

On the sixth day (7th January) of nest building, the flowerpeckers were back at the nest. Video documentation was done in the morning for about 100 minutes.

And as in previous days, only the female was working. She made a total of 85 visits to the nest site, bringing floss mainly to line the egg chamber (above). The male was seen only once (below). This worked out to about 51 visits per hour.

Each time the female flew in she may land a short distance from the nest. In this case she acted cautiously, looking around before flying to the nest. When she was confident that no one was around, she flew in and landed at the entrance of the nest before moving in to undertake finishing touches to the interior.

There were a few times when she came with plant floss to add on to those lining the egg chamber. At 2:09 of the edited video below, the female flew in with floss in her bill and laid low (above). The calling of the male can be heard in the background, possibly to warn her of danger. She flew to the nest only about a minute later.

There were no activities the next three days. 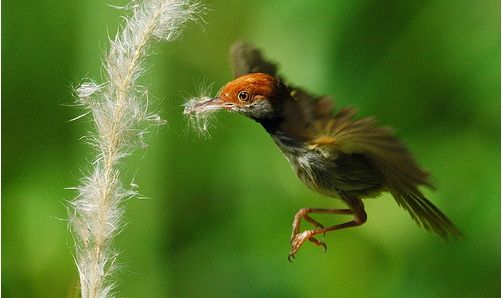