MeiLin Khoo came across a courting pair of Indian Peafowls (Pavo cristatus) at Siloso Point, Sentosa on 23rd December 2017. These attractive birds are native to Pakistan through most of India to Sri Lanka. Some decades ago these free-ranging birds were introduced to the tourist island of Sentosa and since then the population has increased LINK. Obviously, they have been successfully breeding through the years LINK. The male, commonly known as a peacock, has extravagant blue-green plumage that plays an important role in courtship. The tail feathers spread out in a distinctive train that is more than 60% of the total body length. Each feather is decorated with colourful “eyes” of blue, gold, red and other hues LINK. During courtship display these tail feathers are arched into a magnificent fan to signal to the females that he is ready to mate. The male struts around, turns its back to the female to expose the white feather shafts, rustles them and turn around again to face the female to dazzle her with his impressive fan studded with large colourful eyes.

The females, known as peahens, are believed to choose their mates according to the size and colour of these feathers. And possibly, the more the eye-spots, the chances of mating with females increases. 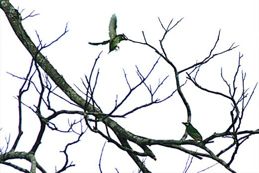