30th Aug – “A new coat of head and neck feathers almost replaced, final moult accentuated on back and rump, the fledgling-juvenile was about to meet an adversary, she had to share forest with (below). “There was another ground forager nearby… another fledgling Blue-winged Pitta (Pitta moluccensis) no more than two week old… a quarto crept up on the quiet! “My energy spent over last few months was beginning to lose steam, in anticipation that once JSparrow completed its post-natal moult, would I probably see no more- the time was coming close to say ‘Adios’.

31Aug – “I had to put in more steam on my 31st visit when given opportunity to observe interaction outcome of these two fledglings from different batches when placed together. While predictions proved mostly correct to whereabouts JSparrow might appear to forage, Born Free was quite a demeanour.

“JSparrow hastily swerved and walked off to avoid a confrontation when Born Free was spotted charging towards JSparrow. Born Free pursued with grave mistake in ignorant pecking order that resulted in a sparring session and sent Born Free shamelessly to flee and lesson learnt. ‘Don’t mess about with Tai Kor…’ (Big brother)

“It was observed, while sharing foraging grounds were quite acceptable, anything closer than a metre from each other was ill tolerated.

“An interesting observation issued in the presence of a Plantain squirrel (Callosciurus notatus). Both fledglings appeared to regroup in the face of common potential predator. When squirrel scurried passed between both, two different reactions were observed. JSparrow raised both wings wide, corked its tail and trotted to a perch on a boulder in show of size and defence. Born Free executed something different- a cowardly move.

“JSparrow having reached peak moult, looked loosely fluffed up with fresh, downy feathers looking for directions to fit in (below). “At times, it was a game of Hide-N-Seek with JSparrow. Bird tried to hide on the quiet, played dead thinking I could not see her/him on same eye level (below). 1st Sept – “Rain poured overnight and continued into late morning. My visit was deferred until late afternoon. I sensed a short visit was needed as crucial moments were approaching before JSparrow faded away.

“The near juvenile hiding behind a row of low palm trees was shy and skittish. I was no longer able to get loser than 10m and no photography opportunities were had. “At times, fledgling-juvenile hid amongst rocky edifice and was spotted performing feather maintenance and preening off loose feathers. I have accentuated all blue feathers on its coverts and rump (top, bottom). 6th Sept – “35th visit saw no sign of JSparrow in favourite stream forest or in neighbouring breeding habitat of Pittas. It rained overnight.

9th Sept – “No show from JSparrow. ‘Had the fledgling-juvenile moved on?’

10-16Sept (6th Week)
11Sept – My 37th visit-I searched the stream forest in vain for any Pitta activity until one was spotted foraging on side trail on final lap round. Initially mistaken for Born Free, I was taken by surprise that upon more scrutiny, ground dweller turned out to be JSparrow. “This image suggested more time was needed to complete post natal moult as blue coverts and rump feathers yet to be fully replaced (above). “JSparrow preened and stretched to comfort positioning (above, below). “Rested and perched one footed on low branch presenting a front view of new change of downy feathers on chest and belly (below). 16Sept – Rained heavily for last two days. As soon as rains abated in the morning, I made a 39th visit to chance re-sighting of the two fledgling-juveniles. Foraging rounds well soaked and flooded in some areas, hunger brought JSparrow and Bornfree out. They were spotted prospecting and foraging around huge ant mould hills. “At end of six weeks, JSparrow’s post natal moult had almost completed; except for some residual at its coverts. This was the last sighting of JSparrow or … so I thought (above).

17Sept – “Rain abated morning and the river forest revisited. While an early opportunity was had with Bornfree being spotted, JSparrow was no where to be seen. Perhaps… the time may have finally arrived for its departure – signalled by the late S-W monsoon rains that pelted relentlessly. As mentioned earlier, if bird not seen does not mean it isn’t there.

22Sept – “It would take another two more visits until my 43rd before JSparrow mysteriously showed up at its favourite patch! 23Sept – “On my 44th visit, JSparrow was spotted again. Post natal moult completed in the 7th week old and replaced by a fresh, new coat plumage of a juvenile bird. Orangey gape remained (above). It appeared; this independent, ground dweller juvenile was extending her summer vacation….in my ‘backyard.’
29Sept- My 47th visit saw only a short glimpse of JSparrow as it appeared from behind some rocks. 2 Oct – “49th conclusive visit yielded some prospective images to include JSparrow’s black banded tail-; rarely seen nor had I photographed before. Image came with a bonus post poop shot (above).

“JSparrow eventually took to a trail, partially hidden by vegetation growth and discreetly yawned, stretched, pooped and froze a while.

“It was indeed fulfilling having observed JSparrow -followed through to its post natal moult and evolved into a fresh feathered, handsome juvenile, looking more like a male each passing day. “This is JSparrow – beginning his 9th week of his life in the northern Peninsular Malaysian forest (above). Was JSparrow aware an admirer with green, long sleeves was observing him from a distance? “JSparrow gestured with a ballooned ‘goodbye’ kiss with his chest and belly (above).

“It was time to let go the endearing juvenile Pitta moluccensis…” 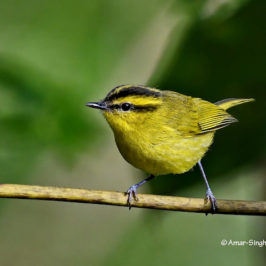 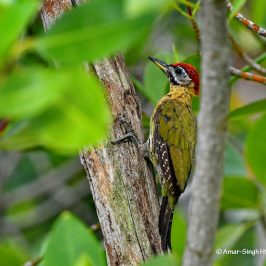