“I saw an interesting behaviour today of the use of the tongue by bitterns and herons. I first spotted a Yellow Bittern (Ixobrychus sinensis) doing this (above).

“Soon after I spotted a Grey Heron (Ardea cinerea jouyi). I was quite close to the Grey Heron (in a vehicle) and had only moments to respond and decided on a burst of images (4 images below), as setting up video would have missed the behaviour. The bird had just swallowed a fish prey and then proceeded to rub the tongue over the inside of the bill numerous times. This has been seen before and considered as a ‘bill cleaning’ activity. But I wonder if it could also be a ‘tongue cleaning’ activity? “I was using a Lexar XQD card with can take images at 10 fps and I took 80. I merged 70 into a gif to show the behaviour HERE (hope this plays on Facebook as YouTube does not allow uploading of Gifs). “I had not realised that the tongue of the Grey Heron is so long and mobile. Having had a close view I could not see any obvious barbs (some fish-eating birds have tongues with rear-directed hooks to prevent wriggling fish from slipping out). But if you look carefully at the last two images below, you will notice that the tongue broadens out midway with side ‘out-pouching’. I wonder if barbs are located at the base of this out-pouching? 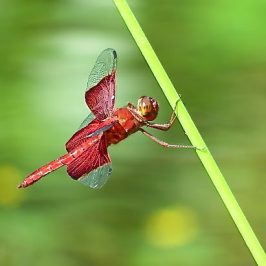