On the morning of 4th October 2017, when I was working on my compost heap, a blue eggshell dropped at my feet LINK. Looking up I saw a Javan Myna (Acridotheres javanicus) standing at the edge of my roof. So, a pair of Javan Mynas nesting nearby must have just hatched an egg.

I have a resident pair of mynas that regularly forages nearby whenever I work on my garden. Can it be that their nest was nearby and an egg had just hatched? A few days later when I was turning up the compost, the mynas managed to catch an earthworm or two and flew off. Suddenly I heard the chirpings of chicks when food is delivered to them. The sound came from the roof of my back-neighbour’s house. So I was right, my resident mynas were nesting again. On the afternoon of 25th October 2017 I heard the begging cries of a juvenile Javan Myna in my front garden (above). Obviously, the chick, hatched from the egg on 4th October, had just fledged. So, the fledging period (meaning the number of days from hatching to fledging) of the Javan Myna is 21 days. This bit of information has not been reported before (see Craig & Feare, 2009; Feare & Craig, 1998; Wells, 2007) but we know the incubation period as 13-14 days. An adult was seen responding to the begging cries of a juvenile perched on a branch of the Singapore Rhododendron (Melastoma malabathricum) bush in my garden. Later that evening there was an attempt at feeding the begging juvenile but without success (above, below). The adult had a beak-full of food but apparently the juvenile had yet to learn how to accept the adult’s offer of food outside the nest. The latter did not know it had to open its beak to receive the food. As I was trying to photograph both birds, the adult was moving around the juvenile, even flying to a nearby tree and back. It took some time before the juvenile finally accepted the food. It moved to the ground to eat it, then returning to its perch. This must have been an early learning period after leaving the nest. The next morning the juvenile was again found in the same bush begging for food. It has yet to accompany the adults foraging on the ground, a scene I had seen many times before.

That evening I again heard the begging cries of the juvenile. This time it was on a palm at the back of my garden. Later the cries were heard in the front of my garden, coming from a roadside tree. The juvenile must have improved its flying skills and now moving around with the adults. However, the adults still brought food to it and have yet to teach it to forage on the ground. 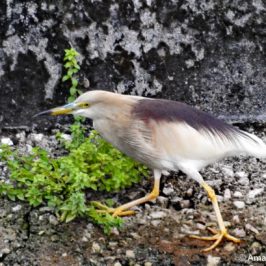