An earlier post gave an account of the two adult Javan Mynas (Acridotheres javanicus) teaching a recently fledged juvenile how to forage, etc. For a common species as this, we have no information on how long the juvenile remains with the adults before the former is chased off to lead a life of its own.

Craig & Feare (2009) as well as Wells (2007) give no information on the fledging period of the Javan Myna. Wikipedia gives 22-24 days for the Common Myna (Acridotheres tristis). The definition of fledgling period referred to is after Erritzoe et al. (2007): “the period from leaving the nest to becoming independent of parents.”

How long does the recently fledged juvenile Javan Myna remain with the adults? The resident pair of Javan Mynas in my garden brought in a noisy juvenile on 9th August 2017. This was when I first heard of the begging of a tagging juvenile, so I take this date as the time the chick left the nest.

Two days later the juvenile was still harassing the adults for food even though food was plentiful… see HERE.

According to Aviculturist Lee Chiu San, both the birds are adults in the above video. Adults have shiny plumage, looking sleek and shiny. The juvenile’s plumage on the other hand is dull and lusterless, turning sleek and shiny only after the second moult. Also, the birds in the video have bright yellow beaks and feet. Young birds tend to have matte yellow beaks and feet. The yellow in a youngster is more cream coloured rather than lemon yellow. Furthermore, one of the birds has a prominent crest, not as prominent as with the Jungle Myna (Acridores fuscus), but very noticeable nevertheless. Juveniles do not have crests. Also, an adult was seen giving a territorial display, vocalising, puffing up its chest, and generally showing off. Youngsters usually do not have the nerve to do this.

Conclusion: The fledgling period (leaving nest to independent of the adults) of the Javan Myna is about 25 days, after which the juvenile is chased off to fend for its own. 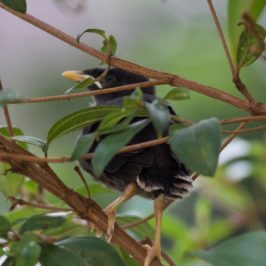 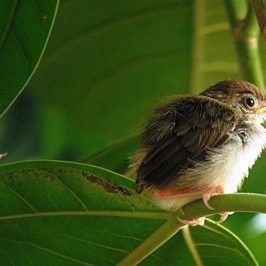