“I was driving on a narrow dirt trail in wetlands area of ex-mining pools and water plant overgrowth when I met up with this Purple Swamphen (Porphyrio porphyrio viridis). It is probably a bird I met a number of times and is rather ‘friendly’. I had an opportunity to watch feeding behaviour for 25 minutes at close range. I stayed in the car and used a bean bag to stabilise the lens and the bird was about 3 meters out the car window – blocked by reeds but generally offering a good observation of feeding habits. The diet of this bird is well established. I want to offer some observations on feeding and some images and video to support it.

“An earlier post is on feeding behaviour of Purple Swamphen on snails LINK. This second observation deals with feeding on shoots. “I saw 3 shoot feeding episodes in the 25 minute observation. The bird was quite sharp at spotting these in the water and breaking off the succulent tip. It would peel off the outer layer (above, below) before consuming the shoot. “A dirt encrusted shoot would be washed before eating. Bits that had fallen into the shallow water were also searched for and consumed. I am amazed at the dexterity of such a large claw. Although I have called these ‘shoots’, I think they are stolons of the Water Hyacinth plant (Eichhornia crassipes) which is a runner outgrowth for reproduction.” 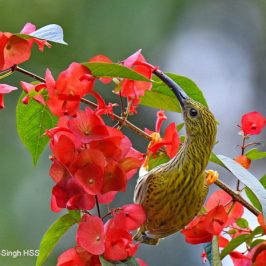