“The mobbing lasted for about 10 minutes. During that time, the birds were observed calling loudly and making a ruckus. Each bird took turns to stage a mock attack, dive bombing at times before retreating to a nearby branch to perch. Strangely, the viper did not react in any way to the mobbing and remained at the same location long after the mobbing.

“I was only able to video the Olive-backed sunbird and Crimson Sunbird mobbing the viper as I had a telephoto lens on my camera and therefore could not zoom out (below).

“The photo below shows the Pin-striped Tit-babbler perched about half a meter away from the viper, ready to launch another attack. “It was interesting to see 4 bird species having a common objective, taking turns mobbing a common enemy. Unfortunately it was a futile effort by these birds.” 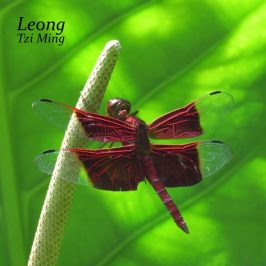 “While inspecting a local pond in February 2017, I was greeted by a charming and...