“By mid-morning, Formosan Whistling-thrush (Myophonus insularis) at Tonghou River was ready for bath and a pair was observed contemplating, who was going to get wet first. “The running stream of cool, clean water was simply too good to resist. Finally, a daily routine issued. One pussy footed into water and against the current flow, bathed vigorously and with sheer delight. “Here are composite clippings taken from video (above 3 images).

“Repeated wing-flapping, body shuddering and tail wriggling were observed. Head dunking and butterfly winged strokes executed sent water to splash over, like fountain sprays to a rinse off. “Satisfied, bird flew off to preen and to prime its feathers. “A caterpillar crustacean-looking species or similar became mid-morning snack to a keen eyed Formosan Whistling Thrush as sunbathing wriggler took on a fool hardy stunt when remained and exposed on rock surface (above). “The endemic bird wasted no time to pincer the hairy creature and executed several rapid, concussionary twists and swings. The former held on to it prey possessively, as it strutted about the rocks for a hideout (above). “Still hanging on to its prey, an interesting observation issued and behaviour captured on video. Here are the composite clippings (above). “The bird stared and raised its wings (above).
Was it a show off or rising to a challenge? “I was not able to locate any aggressor nearby to suggest presence of a predator or food competitor at hand; but the action suggested, bird wanted to act bigger, to threaten, to ward off an adversary and had no intention of losing its prized catch (above). “Constant gurgling and rippling water washed the rocky bed of the river, emitting a ‘24-7’ background music to ears of these whistlers.
Here, an adult Formosan Whistling Thrush perched on a fallen branch contemplating the good carefree life. |PLATE 9|

“How can life be dull on the rocks?

“Not… when readers are going to meet another species romancing in the neighbourhood of the Tonghou River in Wulai.” 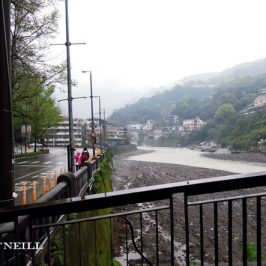 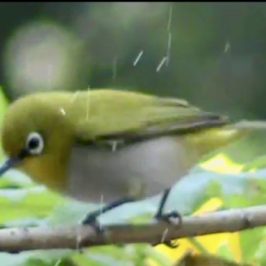 By now most birdwatchers and photographers are aware of anting. This is where certain birds...